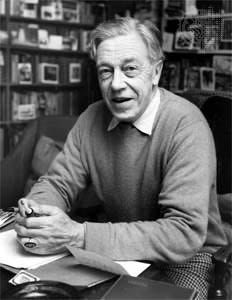 Nicholas Blake is the pseudonym of poet Cecil Day-Lewis C. Day Lewis who was born in Ireland in 1904. He was the son of the Reverend Frank Cecil Day-Lewis and his wife Kathleen (nee Squires). His mother died in 1906 and he and his father moved to London where he was brought up by his father with the help of an aunt.

He spent his holidays in Wrexford and regarded himself very much as anglo-irish, although when the Republic of Ireland was declared in 1948 he chose British citizenship.

He was married twice, to Mary King in 1928 and to Jill Balcon in 1951 and during the 1940s he had a long love affair with novelist Rosamond Lehmann. He had four children from his two marriages with actor Daniel Day-Lewis, documentary filmmaker and television chef Tamasin Day-Lewis and TV critic and writer Sean Day-Lewis being three of his children.

He began work as a schoolmaster and during World War II he worked as a publications editor in the Ministry of Information. After the war he joined Chatto & Windus as a senior editor and director and then in 1946 he began lecturing at Cambridge University. He later taught poetry at Oxford University, where he was Professor of Poetry from 1951-1956 and from 1962-1963 he was the Norton Professor at Harvard University.

But he was by then earning his living mainly from his writings, having had some poetry published in the late 1920s and early 1930s and then in 1935 beginning his career as a thriller writer with 'A Question of Proof', which featured his amateur sleuth Nigel Strangeways, reputedly modelled on W H Auden. He continued the Strangeways series, which finally totalled 16 novels ending with 'The Morning After Death' in 1966. He also wrote four detective novels which did not feature Strangeways.

He continued to write poetry and became Poet Laureate in 1968, a post he held until his death in 1972. He was also awarded the CBE.

He died from pancreatic cancer on 22 May 1972 at the Hertfordshire home of Kingsley Amis and Elizabeth Jane Howard, where he and his wife were staying. He is buried in Stinsford churchyard, close to the grave of one of his heroes Thomas Hardy, something that he had arranged before his death.

A Question of Proof (Nigel Strangeways, #1)
The faculty and student body at Sudeley are shocked but scarcely saddened when the headmaster’s obnoxious nephew, Algernon Wyvern-Wemyss, is found dead in a haystack on Sports Day.

But when the young English master, Michael Evans, becomes a suspect in the case, he’s greatly relieved when his clever friend Nigel Strangeways, who is beginning to make a name for himself as a private inquiry agent, shows up to lend a hand to the local constabulary.

Strangeways immediately wins over the students and even becomes an initiate in one of their secret societies, The Black Spot, whose members provide him with some of the information he needs to solve the case.

In the meantime Michael and Hero Vale, the pretty young wife of the headmaster, continue their hopeless love affair. When another murder follows, Strangeways is soon certain of the murderer’s identity, but until he can prove it, he’s reluctant to share his theory with the unimaginative but thorough Superintendent Armstrong.

Published in 1935 while he was a schoolmaster himself, this is the first detective novel by C. Day-Lewis, the noted man of letters who went on to become England’s poet laureate.
03

Thou Shell of Death (Nigel Strangeways, #2)
Nigel Strangeways is off to a Christmas houseparty hosted by Fergus O’Brien, a legendary World War I flying ace now retired from private life, who has received a series of mocking letters predicting that he will be murdered on Boxing Day.

His guest list includes everyone who could even remotely be suspected of making the threats, including several people who stand to profit from O’Brien’s death, as well as Nigel, who is invited in his capacity as a criminal investigator.

Despite Nigel’s presence, the murder takes place as predicted, and he’s left to aid the local police in interviewing the suspects. One of them is Georgia Cavendish, a brave and colorful explorer who has been romantically linked with O’Brien and with whom Nigel falls in love.

Convinced that the case will never be solved unless the mystery of O’Brien’s past is cleared up, Nigel heads for Ireland to learn what he can about the victim’s origins. Originally published in 1936, it’s the second mystery by Blake (really C. Day-Lewis, the late Poet Laureate of England) and without a doubt one of his best, with its dazzlingly complex plot, arresting characters, and shocking but inevitable solution.
04

The Corpse in the Snowman (Nigel Strangeways, #7)
Nigel and Georgia are asked to come in midwinter to Easterham Manor under the pretense of investigating a psychic incident. Shortly after their arrival, the rather notorious, strikingly beautiful, Elizabeth Restorick is found dead by hanging.

Nigel uncovers evidence of murder, and he soon finds himself once again working with his friend, Inspector Blount of Scotland Yard.
05

End of Chapter (Nigel Strangeways, #12)
There is a saboteur hiding in plain sight at the publishing house of Wenham & Geraldine. An incendiary, and wildly libellous, passage has been slipped into a book somewhere between the final check and the printing press… a seemingly impossible task. Desperate to avoid a scandal, the partners call in Nigel Strangeways to uncover the meddler.

Is it Stephen Protheroe, defunct poet, curmudgeon, and the last known person to access the manuscript? Or Mr Bates, the production manager recently forced reluctantly into retirement? Miss Millicent Miles, the romance novelist hoping to reinvigorate her ailing career with a steamy autobiography, or the now libellous author himself, General Thoresby?

With so many suspects, Strangeways struggles to identify a motive, let alone a culprit. But when an employee is found slain in the office, it seems the case may be more personal than it first appeared…
06

There's Trouble Brewing (Nigel Strangeways, #3)
Tyrannical businessman Eustace Bunnett and an assortment of employees and local characters become suspects when Nigel Strangeways investigates the murder of a man found dead in one of the vats at Bunnett's Dorset brewery.
07

The Smiler With the Knife (Nigel Strangeways, #5)
Seldom does a little bit of gardening change the course of history. Trimming the hedgerow one sunny morning, those incomparable partners in crime, Nigel and Georgia Strangeways, discover a tarnished locket. Hidden inside are dark secrets which threaten the nation’s democracy.

Leaving Nigel disconsolate at home, Georgia sets off on an hilarious romp across the country, pursuing a clique of Little Englanders inspired by Fascist Germany.

In her battle for Britain she encounters reckless gamblers and a quiet village vicar, England’s top batsman and the Radiance Girls in flowing orange chiffon, and, most suspicious of all, a peer of the realm with more on his mind than a coronet. Who is friend? Who is foe? Who would destroy the sanctity of England’s green and pleasant land?
08

The Widow's Cruise (Nigel Strangeways, #13)
“The only thing I have against cruise life,” said Clare, yawning again, “is that it’s turning us all into busybodies and gossips.”

Renowned sculptor, Clare Massinger, is in a bit of a creative slump. To provide a little inspiration, Nigel Strangeways books them a relaxing cruise on the Aegean Sea. Filled with Greek temples, swimming pools, and sandy beaches, this scenic vacation should be the perfect getaway. But when they meet the other passengers, Nigel and Clare realize the cruise may not be as peaceful as planned.

It seems everyone knows everyone else’s business: a schoolteacher recovering from a nervous breakdown is confronted by a former student; a scholar is embarrassed by a scornful reviewer; a seductive temptress is known to a Bishop, and, to top it off, two busybodies are keeping tabs on everyone.

As the passengers’ lives become increasingly intertwined, it seems a plot for revenge may be afloat. Amidst steamy assignations, false accusations, and suicide threats, Nigel’s holiday doesn’t last long, and he must take charge to uncover the truth before the passengers have something more disturbing to gossip about…
09

Minute for Murder (Nigel Strangeways, #8)
Wartime Britain: photos are stolen… a secretary is poisoned… a director is stabbed…

A hero returned from a secret mission visits his onetime colleagues (among them, Nigel Strangeways) at the Ministry of Morale. His former fiancée, the beautiful Nita, is now having an affair with the director, his brother-in-law…
10

The Dreadful Hollow (Nigel Strangeways, #10)
Prior’s Umborne was a poisoned village, no doubt about that.

The small town of Prior’s Umborne is alive with gossip and accusation. A rash of poison pen letters has been sent to some of the inhabitants. Bleeding out buried secrets from the recipients’ pasts, the letters have already driven one man to take his own life.

With fear and suspicion spreading like wildfire, Private Investigator Nigel Strangeways is called in by Sir Archibald Blick, a wealthy businessman with his own set of enemies, to determine who is behind these malicious letters.

But as Nigel becomes a part of village life, he uncovers more than just the author of these deadly notes. When another body is discovered, Nigel must work quickly to untangle a web of family secrets and rivalry, love triangles and ultimatums before old grudges claim another life.