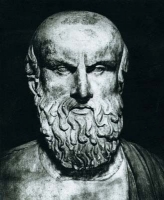 Aeschylus, an ancient Greek playwright, is often recognized as the father or the founder of tragedy. He is the earliest of the three Greek tragedians whose plays survive extant, the others being Sophocles and Euripides. According to Aristotle, he expanded the number of characters in plays to allow for conflict among them; previously, characters interacted only with the chorus. Unfortunately, only seven of an estimated 70 plays by Aeschylus have survived into modern times; one of these plays, Prometheus Bound, is sometimes thought not to be the work of Aeschylus.

At least one of Aeschylus's works was influenced by the Persian invasion of Greece, which took place during his lifetime. His play The Persians remains a good primary source of information about this period in Greek history. The war was so important to Greeks and to Aeschylus himself that, upon his death around 456 BC, his epitaph included a reference to his participation in the Greek victory at Marathon but not to his success as a playwright.

There are no reliable sources for the life of Aeschylus. He was said to have been born in c. 525 in Eleusis, a small town about 27 kilometers northwest of Athens, which is nestled in the fertile valleys of western Attica, though the date is most likely based on counting back forty years from his first victory in the Great Dionysia. His family was both wealthy and well-established; his father Euphorion was a member of the Eupatridae, the ancient nobility of Attica.

As a youth, he worked at a vineyard until, according to the 2nd-century AD geographer Pausanias, the god Dionysus visited him in his sleep and commanded him to turn his attention to the nascent art of tragedy. As soon as he woke from the dream, the young Aeschylus began writing a tragedy, and his first performance took place in 499 BC, when he was only 26 years old. After fifteen years, his skill was great enough to win a prize for his plays at Athens' annual city Dionysia playwriting competition. But in the interim, his dramatic career was interrupted by war. The armies of the Persian Empire, which had already conquered the Greek city-states of Ionia, entered mainland Greece in the hopes of conquering it as well.

In 490 BC, Aeschylus and his brother Cynegeirus fought to defend Athens against Darius's invading Persian army at the Battle of Marathon. Though Athens was victorious, Cynegeirus died in the battle. Aeschylus continued to write plays during the lull between the first and second Persian invasions of Greece, and won his first victory at the city Dionysia in 484 BC. In 480 he was called into military service again, this time against Xerxes' invading forces at the Battle of Salamis. This naval battle holds a prominent place in The Persians, his oldest surviving play, which was performed in 472 BC and won first prize at the Dionysia.

Aeschylus was one of many Greeks who had been initiated into the Eleusinian Mysteries, a cult to Demeter based in his hometown of Eleusis. As the name implies, members of the cult were supposed to have gained some sort of mystical, secret knowledge. Firm details of the Mysteries' specific rites are sparse, as members were sworn under the penalty of death not to reveal anything about the Mysteries to non-initiates. Nevertheless, according to Aristotle, it was alleged that Aeschylus had placed clues about the secret rites in his seventh tragedy, Prometheus Bound. According to some sources, an angry mob tried to kill Aeschylus on the spot, but he fled the scene. When he stood trial for his offense, Aeschylus pleaded ignorance and was only spared because of his brave service in the Persian Wars.

Aeschylus traveled to Sicily once or twice in the 470s BC, having

In the Oresteia—the only trilogy in Greek drama which survives from antiquity—Aeschylus took as his subject the bloody chain of murder and revenge within the royal family of Argos.

Moving from darkness to light, from rage to self-governance, from primitive ritual to civilized institution, their spirit of struggle and regeneration becomes an everlasting song of celebration.
02

Agamemnon (Oresteia, #1)
Treating ancient plays as living drama. Classical Greek drama is brought vividly to life in this series of new translations. Students are encouraged to engage with the text through detailed commentaries, including0 suggestions for discussion and analysis. In addition, numerous practical questions stimulate ideas on staging and encourage students to explore the play's dramatic qualities. Agamemnon is suitable for students of both Classical Civilisation and Drama. Useful features include full synopsis of the play, commentary alongside translation for easy reference and a comprehensive introduction to the Greek Theatre. Agamemnon is aimed primarily at A-level and undergraduate students in the UK, and college students in North America.
03

Prometheus Bound
For readers accustomed to the relatively undramatic standard translations of Prometheus Bound, this version by James Scully, a poet and winner of the Lamont Poetry Prize, and C. John Herington, one of the world's foremost Aeschylean scholars, will come as a revelation. Scully and Herington accentuate the play's true power, drama, and relevance to modern times. Aeschylus originally wrote Prometheus Bound as part of a tragic trilogy, and this translation is unique in including the extant fragments of the companion plays.

Prometheus Bound and Other Plays
05

Eumenides (Ορέστεια, #3)
Sommerstein presents a freshly constituted text, with introduction and commentary, of Eumenides, the climactic play of the only surviving complete Greek tragic trilogy, the Oresteia of Aeschylus. Of all Athenian tragic dramas, Eumenides is most consciously designed to be relevant to the situation of the Athenian state at the time of its performance (458 B.C.) and seems to have contained daring innovations both in technique and in ideas. The introduction and commentary to this edition seek to bring out how Aeschylus shaped to his purpose the legends he inherited, and ended the tragic story of Agamemnon's family in a celebration of Athenian civic unity and justice. The commentary also pays attention to the linguistic, metrical and textual problems to be encountered by the reader.
06

The Persians
This scarce antiquarian book is a facsimile reprint of the original. Due to its age, it may contain imperfections such as marks, notations, marginalia and flawed pages. Because we believe this work is culturally important, we have made it available as part of our commitment for protecting, preserving, and promoting the world's literature in affordable, high quality, modern editions that are true to the original work.
07

The Libation Bearers (Ορέστεια, #2)
Produced in 458 BC, Aeschylus' Choephori is the second play in the Oresteian trilogy. Many years after king Agamemnon's murder at the hands of his wife Clytamnestra and her lover Aigisthos, his son Orestes returns home with Pylades to mourn at his grave. He has been living in exile and has come back to Argos in secret; his mission is to avenge Agamemnon's death.
08

The Seven Against Thebes
Often called the father of Greek tragedy, Aeschylus (525–456 B.C.) was the earliest and possibly the greatest of the Greek tragic poets. Altogether he may have written as many as 90 plays (including satyr plays as well as tragedies), but only seven have survived.
The Seven Against Thebes (first produced in 467 B.C.) was the final play in a trilogy (the other two are lost) dramatizing the well-known legend of Laius and his son Oedipus. In this culminating play, Oedipus is dead after his banishment from Thebes, and his two sons vie for the crown. The victor, Eteocles, expels his brother, Polynices, who flees to Argos and recruits a force of seven champions to lead an assault on Thebes. The tragic outcome is the fulfillment of the curse of Oedipus — that his sons should divide their inheritance with the sword.
Although Sophocles' treatment of the Oedipus legend is better known, the dialogue and imagery in Aeschylus's play retain an immediacy that resonates with modern readers and audiences. The result is a deeply moving theatrical milestone that is essential reading for students of literature, drama, and the classics.
09

Greek Tragedy
Agememnon is the first part of the Aeschylus's Orestian trilogy in which the leader of the Greek army returns from the Trojan war to be murdered by his treacherous wife Clytemnestra. In Sophocles' Oedipus Rex the king sets out to uncover the cause of the plague that has struck his city, only to disover the devastating truth about his relationship with his mother and his father.
Medea is the terrible story of a woman's bloody revenge on her adulterous husband through the murder of her own children.
10

The Suppliants
A shrine is stronger than a tower to save, A shield that none may cleave. Step swift thereto, And in your left hands hold with reverence The white-crowned wands of suppliance, the sign Beloved of Zeus, compassion's lord, and speak To those that question you, words meek and low And piteous, as beseems your stranger state,