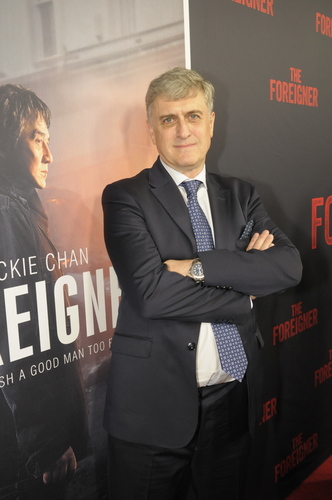 Stephen Leather was a journalist for more than ten years on newspapers such as The Times, the Daily Mail and the South China Morning Post in Hong Kong. His bestsellers have been translated into more than ten languages. He has also written for television shows such as London's Burning, The Knock and the BBC's Murder in Mind series. For much of 2011 his self-published eBooks - including The Bestseller, The Basement, Once Bitten and Dreamer's Cat - dominated the UK eBook bestseller lists and sold more than half a million copies. The Basement topped the Kindle charts in the UK and the US, and in total he has sold more than two million eBooks. His bestselling book The Chinaman was filmed as The Foreigner, starring Jackie Chan and Pierce Brosnan and grossing more than $100 million.

Dan 'Spider' Shepherd is used to putting his life on the line. Working for an elite undercover squad he has lied, cheated and conned in order to bring Britain's most wanted criminals to justice.

But when a powerful drugs baron starts to kill off witnesses to his crimes, Shepherd is given his most dangerous assignment yet. He has to go undercover in a top security prison, a world where one wrong move will mean certain death.

As Shepherd gambles everything to move in on his quarry, he soon realises that the man he is hunting is even more dangerous than the police realise. And that he is capable of striking outside the prison walls and hitting Shepherd where it hurts most.
02

Nightfall (Jack Nightingale, #1)
When he couldn't save a little girl who was being abused, policeman Jack Nightingale left the force and became a private investigator. He has recently inherited a mansion from a man who turns out to be his father. A father who killed himself when he was unable to reverse a deal he did with a demon - a deal that sold his son's soul.
03

The Basement
New York City. With a population of almost nineteen million people, it's easy to remain anonymous even if you're a serial killer, torturing and murdering beautiful young women. The killer has another victim right now, locked in a basement somewhere in the city. For NYPD detectives Turner and Marcinko, it's their job to sift through those nineteen million and narrow their list to the one before it's too late. And they're sure they have the right man in their sights. Fusing alternating viewpoints with devastating precision, Leather's top-notch thriller dives deep into the mind of a demented killer as tension mounts immeasurably. Turner and Marcinko's prime suspect is screenwriter wannabe Marvin Waller. He is becoming increasingly frustrated by his lack of success and the cops think he might be channeling his anger into murder ? yet he doesn't seem to be at all concerned that they are hot on his trail. As Turner and Marcinko close in on Waller they have to wonder: is he the killer? And if he isn't ? who is? Only time will tell ? and time is one thing they do not have. An unrelenting vice-grip of suspense and fear, The Basement is the ultimate shocker with a shattering climax that will leave you battered, bruised, and broken.
04

Midnight (Jack Nightingale, #2)
The second in the exhilarating new series by Stephen Leather that began with NIGHTFALL: of-the-minute thrillers with a supernatural twist.

Jack Nightingale found it hard enough to save lives when he was a cop. Now he needs to save a soul - his sister's. But to save her he has to find her and they've been separated since birth.

When everyone Jack talks to about his sister dies horribly, he realises that someone, or something, is determined to keep them apart.

If he's going to save his sister, he's going to have to do what he does best - negotiate. But any negotiation with the forces of darkness comes at a terrible price. And first Jack must ask himself the question: is every soul worth saving?
05

When a group of armed police in an elite unit turn maverick and start to rip off drug dealers at gunpoint, undercover cop Dan 'Spider' Shepherd is given his most dangerous mission so far.

Shepherd is ordered to infiltrate the tight-knit team, to gain their confidence and to ultimately betray them.

Facing men with guns is nothing new for the former SAS trooper, but it's the first time he's had to investigate his own. And the job couldn't have come at a worse time for him.

As Shepherd finds himself in the firing line, he has to decide exactly where his loyalties lie.
06

Tall Order (Dan Shepherd #15)
He is one of the world's most ruthless terrorists, codenamed Saladin. He plans and executes devastating attacks and then, ghost-like, he disappears.

Ten years ago he blew a plane out of the sky above New York - and now he's struck again, killing dozens in a London strike.

But one of the latest victims is related to the acting head of MI5, who knows exactly who she wants on the case: Spider Shepherd.

Dean Martin, a psychologically damaged former Navy SEAL, is the only person in the world who can identify Saladin. But Martin was killed ten years ago - wasn't he?

Shepherd must find Martin and take him back to the killing fields on the Afghanistan-Pakistan border. Revenge on the world's most wanted terrorist is long overdue, and Shepherd is determined to be the one to deliver it . . .
07

Light Touch (Dan Shepherd, #14)
Working undercover is all about trust - getting the target to trust you and then betraying them in order to bring them to justice.

But what do you do when you believe an undercover cop has crossed the line and aligned herself with the international drugs smuggler she was supposed to be targeting?

When a deep-undercover cop stops passing on intelligence about her target, MI5 sends in Dan 'Spider' Shepherd to check that she is on the straight and narrow.

Now two lives are on the line - and Shepherd discovers that the real danger is closer to home than he realised.

As Spider finds his loyalties being tested to the limit, an SAS killer is on a revenge mission in London and only Spider can stop him.
08

Black Ops (Dan Shepherd, #12)
WHO CAN YOU TRUST IF YOU CAN'T TRUST YOURSELF? Spider Shepherd's MI5 Controller, Charlie Button, has gone rogue, using government resources to get revenge on the men who killed her husband. Spider is told to betray her. Worse, he's asked to cooperate with his nemesis at MI6, Jeremy Willoughby Brown, in taking Charlie down. And he will have to cross the assassin, Lex Harper, currently on the trail of two Irish terrorists, who may be able to lead him to his ex-boss. Meanwhile, Spider's sixteen-year-old son is caught with drugs, expelled from school and threatened with prosecution. But the drug police offer Spider a deal: go undercover, unmask a local dealer and his son will go free. Spider has no option but to cooperate. But is he any better than Charlie, using work resources to resolve personal issues? There's little time to debate because another high profile mission is about to engulf him. President Vladimir Putin is about to visit the UK and a father who lost his son on the downed Malaysian plane over the Ukraine holds Putin directly responsible for his death and wants revenge. Along with everything else, it's down to Spider to stop the assassination of a head of state on British soil.
09

What goes around, comes around. Jack Nightingale learned that as a cop and discovered that it was just as true in the world of the supernatural. His life changed forever on the day he failed to stop a young girl throwing herself to her death. Ever since, he's been haunted by thoughts that he could have done more to save her.

Now her cries for help are louder than ever. Is she trapped in eternal torment? Can Nightingale put things right? Or are the forces of darkness torturing and deceiving him in order to gain the ultimate prize - his soul? Nightingale will have to face down the powers of the police, south London gangs and Hell itself to find out. And evil is closer than he thinks . . .
10

'Let Spider draw you into his web, you won't regret it' Sun

The thirteenth book in action supremo Stephen Leather's Spider Shepherd series is his most pulse-pounding yet. Full of his trademark insider knowledge, DARK FORCES is sure to have you on the edge of your seat.

'A writer at the top of his game' Sunday Express