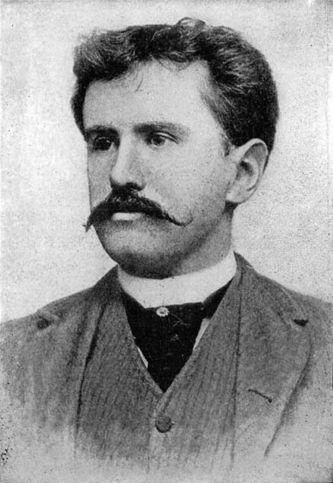 William Sydney Porter lends the pen name "O. Henry" to surprise endings signed officially as Sydney Porter. His biography shows where he found inspiration for his characters. Their voices and his language were products of his era.

He was born 1862 Greensboro, North Carolina. When he was three years old, his mother died from tuberculosis. He left school at fifteen, worked five years in his uncle's drugstore, then for two years at a Texas sheep ranch.

In 1884 he went to Austin where he worked in a real estate office, a church choir, and spent four years as a draftsman in the General Land Office. His wife and firstborn died, but daughter Margaret survived him.

After he failed to establish a small humorous weekly, he worked in poorly-run bank. When its accounts did not balance, he was blamed for it, and fired.

In Houston, he worked for a few years until — ordered to stand trial for embezzlement — he fled to New Orleans and thence, to Honduras.

Two years later, he returned on account of his wife's illness. Apprehended, Porter served a few months more than three years in a Penitentiary in Columbus, Ohio. During his incarceration, he composed ten short stories, including A Blackjack Bargainer, The Enchanted Kiss, and The Duplicity of Hargraves.

While in Pittsburgh, Pennsylvania, he sent manuscripts to New York editors. In the spring of 1902, Ainslee's Magazine offered him a regular income if he moved to New York.

In less than eight years, he became a bestselling author of collections of short stories. Cabbages and Kings came first, in 1904; followed by The Four Million; The Trimmed Lamp and Heart of the West in 1907; The Voice of the City in 1908; Roads of Destiny and Options in 1909, Strictly Business and Whirligigs in 1910. Posthumously published collections include The Gentle Grafter about the swindler, Jeff Peters; Rolling Stones and Waifs and Strays; and in 1936, unsigned stories.

Others were rewarded financially more. A Retrieved Reformation, about the safe-cracker Jimmy Valentine, got $250; six years later, $500 for dramatic rights, which gave over $100,000 royalties for playwright Paul Armstrong. Many stories have been made into films.

The Gift of the Magi
One dollar and eight-seven cents is all the money Della has in the world to buy her beloved husband a Christmas present. She has nothing to sell except her only treasure -- her long, beautiful brown hair. Set in New York at the turn of the twentieth century, this classic piece of American literature tells the story of a young couple and the sacrifices each must make to buy the other a gift. Beautiful, delicate watercolors by award-winning illustrator Lisbeth Zwerger add new poignancy and charm to this simple tale about the rewards of unselfish love.
02

Selected Stories
O. Henry originated the humorous, energetic tale that ends with an ironic, even shocking twist. In "After Twenty Years," for example, two boys agree to meet at a particular spot exactly twenty years later. Both are faithful, but in the intervening years one boy has turned into a criminal, the other into a policeman. Behind the rendezvous lurks a powerful dramatic situation with a fascinating moral dilemma--all in a few brief pages.


This is just one of the many literary gems in Selected Stories of O. Henry, a collection of forty-five of O. Henry's most renowned and entertaining short stories. Each one offers insights into human nature and the ways it is affected by love, jealousy, poverty, gentility, and the all-pervading reality of people conning people--themes that ran through the author's own life. Born William Sidney Porter, O. Henry started writing while in prison for embezzlement. Later he moved to New York, and his tales romanticizing the commonplace, particularly the life of ordinary New Yorkers, became highly popular. The most widely read author of his time, O. Henry died penniless but left behind a wealth of short stories that endure as hallmarks of the genre.
03

The Ransom of Red Chief
Starters are an introductory level to the new Oxford Bookworms Library, suitable for readers in their first or second years of learning English. The Starters series are original stories in a variety of formats: narrative, interactive, and comic strip. They contain glossaries and exercises and are carefully graded in structure and vocabulary. Cassettes are available for some titles.
04

The Gift of the Magi and Other Short Stories
Here are sixteen of the best stories by one of America's most popular storytellers. For nearly a century, the work of O. Henry has delighted readers with its humor, irony and colorful, real-life settings. The writer's own life had more than a touch of color and irony. Born William Sidney Porter in Greensboro, North Carolina in 1862, he worked on a Texas ranch, then as a bank teller in Austin, then as a reporter for the Houston "Post." Adversity struck, however, when he was indicted for embezzlement of bank funds. Porter fled to New Orleans, then to Honduras before he was tried, convicted and imprisoned for the crime in 1898. In prison he began writing stories of Central America and the American Southwest that soon became popular with magazine readers. After his release Porter moved to New York City, where he continued writing stories under the pen name O. Henry.

Though his work earned him an avid readership, O. Henry died in poverty and oblivion scarcely eight years after his arrival in New York. But in the treasury of stories he left behind are such classics of the genre as "The Gift of the Magi," "The Last Leaf," "The Ransom of Red Chief," "The Voice of the City" and "The Cop and the Anthem" — all included in this choice selection. A selection of the Common Core State Standards Initiative.
05

The Last Leaf
Sue and Johnsy are two girlfriends who live together in New York City. When Johnsy becomes sick one winter, she makes up her mind to die when the last leaf falls from the ivy plant growing outside her window. Sue would do anything to help her friend get well, but she is a poor artist. As the winter wind blows and the rain falls, there seems no way to stop the last leaf from falling.
06

The Best Short Stories of O. Henry
The more than 600 stories written by O. Henry provided an embarrassment of riches for the compilers of this volume.The final selection of the thirty-eight stories in this collection offers for the reader's delight those tales honored almost unanimously by anthologists and those that represent, in variety and balance, the best work of America's favorite storyteller.They are tales in his most mellow, humorous, and ironic moods.They give the full range and flavor of the man born William Sydney Porter but known throughout the world as O. Henry, one of the great masters of the short story."
07

Cabbages and Kings
A series of stories which each explore some individual aspect of life in a paralytically sleepy Central American town while each advancing some aspect of the larger plot and relating back one to another in a complex structure which slowly explicates its own background even as it painstakingly erects a town which is one of the most detailed literary creations of the period. In this book, O. Henry coined the term "banana republic".
Table of Contents:
I. "FOX-IN-THE-MORNING"
II. THE LOTUS AND THE BOTTLE
III. SMITH
IV. CAUGHT
V. CUPID'S EXILE NUMBER TWO
VI. THE PHONOGRAPH AND THE GRAFT
VII. MONEY MAZE
VIII. THE ADMIRAL
IX. THE FLAG PARAMOUNT
X. THE SHAMROCK AND THE PALM
XI. THE REMNANTS OF THE CODE
XII. SHOES
XIII. SHIPS
XIV. MASTERS OF ARTS
XV. DICKY
XVI. ROUGE ET NOIR
XVII. TWO RECALLS
XVIII. THE VITAGRAPHOSCOPE
09

When it comes to the holidays, no story brings us back to the true spirit of giving like O. Henry’s classic "The Gift of the Magi". So this year we’ve asked some of your favorite Audible narrators—Audie Award winners Katherine Kellgren, Oliver Wyman, and Jonathan Davis—to bring to life this timeless tale, plus two more of O. Henry’s gems, "The Cop and the Anthem" and "The Last Leaf", in this handcrafted holiday collection.

We hope you enjoy these stories straight from the heart of O. Henry’s New York City hangout as our gift to you.

From all of us here at Audible, happy holidays!