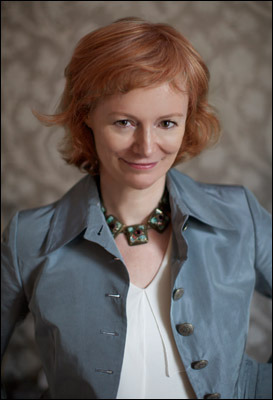 New York Times bestselling author Eloisa James writes historical romances for HarperCollins Publishers. Her novels have been published to great acclaim. A reviewer from USA Today wrote of Eloisa's very first book that she "found herself devouring the book like a dieter with a Hershey bar"; later People Magazine raved that "romance writing does not get much better than this." Her novels have repeatedly received starred reviews from Publishers' Weekly and Library Journal and regularly appear on the best-seller lists.

After graduating from Harvard University, Eloisa got an M.Phil. from Oxford University, a Ph.D. from Yale and eventually became a Shakespeare professor, publishing an academic book with Oxford University Press. Currently she is an associate professor and head of the Creative Writing program at Fordham University in New York City. Her "double life" is a source of fascination to the media and her readers. In her professorial guise, she's written a New York Times op-ed defending romance, as well as articles published everywhere from women's magazines such as More to writers' journals such as the Romance Writers' Report.

When I'm not writing novels, I'm a Shakespeare professor. It's rather like having two lives. The other day I bought a delicious pink suit to tape a television segment on romance; I'll never wear that suit to teach in, nor even to give a paper at the Shakespeare Association of America conference. It's like being Superman, with power suits for both lives. Yet the literature professor in me certainly plays into my romances. The Taming of the Duke (April 2006) has obvious Shakespearean resonances, as do many of my novels. I often weave early modern poetry into my work; the same novel might contain bits of Catullus, Shakespeare and anonymous bawdy ballads from the 16th century.

When I rip off my power suit, whether it's academic or romantic, underneath is the rather tired, chocolate-stained sweatshirt of a mom. Just as I use Shakespeare in my romances, I almost always employ my experiences as a mother. When I wrote about a miscarriage in Midnight Pleasures, I used my own fears of premature birth; when the little girl in Fool For Love threw up and threw up, I described my own daughter, who had that unsavory habit for well over her first year of life.

So I'm a writer, a professor, a mother - and a wife. My husband Alessandro is Italian, born in Florence. We spend the lazy summer months with his mother and sister in Italy. It always strikes me as a huge irony that as a romance writer I find myself married to a knight, a cavaliere, as you say in Italian.

When Beauty Tamed the Beast (Fairy Tales, #2)
Miss Linnet Berry Thrynne is a Beauty . . . Naturally, she's betrothed to a Beast.

Piers Yelverton, Earl of Marchant, lives in a castle in Wales where, it is rumored, his bad temper flays everyone he crosses. And rumor also has it that a wound has left the earl immune to the charms of any woman.

Linnet is not just any woman.

She is more than merely lovely: her wit and charm brought a prince to his knees. She estimates the earl will fall madly in love—in just two weeks.

Yet Linnet has no idea of the danger posed to her own heart by a man who may never love her in return.

If she decides to be very wicked indeed . . . what price will she pay for taming his wild heart?
02

A Kiss at Midnight (Fairy Tales, #1)
Miss Kate Daltry doesn't believe in fairy tales . . . or happily ever after.

Forced by her stepmother to attend a ball, Kate meets a prince... and decides he's anything but charming. A clash of wits and wills ensues, but they both know their irresistible attraction will lead nowhere. For Gabriel is promised to another woman—a princess whose hand in marriage will fulfill his ruthless ambitions.

Gabriel likes his fiancee, which is a welcome turn of events, but he doesn't love her. Obviously, he should be wooing his bride-to-be, not the witty, impoverished beauty who refuses to fawn over him.

Godmothers and glass slippers notwithstanding, this is one fairy tale in which destiny conspires to destroy any chance that Kate and Gabriel might have a happily ever after.

Unless a prince throws away everything that makes him noble...

Unless a dowry of an unruly heart trumps a fortune...

Unless one kiss at the stroke of midnight changes everything.
03

Theodora Saxby is the last woman anyone expects the gorgeous James Ryburn, heir to the Duchy of Ashbrook, to marry. But after a romantic proposal before the prince himself, even practical Theo finds herself convinced of her soon-to-be duke's passion.

Still, the tabloids give the marriage six months.

Theo would have given it a lifetime... until she discovers that James desired not her heart, and certainly not her countenance, but her dowry. Society was shocked by their wedding; it's scandalized by their separation.

Now James faces the battle of his lifetime, convincing Theo that he loved the duckling who blossomed into the swan.

And Theo will quickly find that for a man with the soul of a pirate, All's Fair in Love — or War.
04

A Duke of Her Own (Desperate Duchesses, #6)
A DUKE MUST CHOOSE WISELY...

Leopold Dautry, the notorious Duke of Villiers, must wed quickly and nobly—and his choices, alas, are few. The Duke of Montague's daughter, Eleanor, is exquisitely beautiful and fiercely intelligent. Villiers betroths himself to her without further ado.

After all, no other woman really qualifies. Lisette, the outspoken daughter of the Duke of Gilner, cares nothing for clothing or decorum. She's engaged to another man, and doesn't give a fig for status or title. Half the ton believes Lisette mad—and Villiers is inclined to agree.

Torn between logic and passion, between intelligence and imagination, Villiers finds himself drawn to the very edge of impropriety. But it is not until he's in a duel to the death, fighting for the reputation of the woman he loves, that Villiers finally realizes that the greatest risk may not be in the dueling field...

But in the bedroom. And the heart.
05

Paris in Love
In 2009, New York Times bestselling author Eloisa James took a leap that many people dream about: she sold her house, took a sabbatical from her job as a Shakespeare professor, and moved her family to Paris. Paris in Love: A Memoir chronicles her joyful year in one of the most beautiful cities in the world.

With no classes to teach, no committee meetings to attend, no lawn to mow or cars to park, Eloisa revels in the ordinary pleasures of life—discovering corner museums that tourists overlook, chronicling Frenchwomen’s sartorial triumphs, walking from one end of Paris to another. She copes with her Italian husband’s notions of quality time; her two hilarious children, ages eleven and fifteen, as they navigate schools—not to mention puberty—in a foreign language; and her mother-in-law Marina’s raised eyebrow in the kitchen (even as Marina overfeeds Milo, the family dog).

Paris in Love invites the reader into the life of a most enchanting family, framed by la ville de l’amour.
06

Duchess By Night (Desperate Duchesses, #3)
One night's disguise could lead to a lifetime of passion...

Harriet, Duchess of Berrow, is tired of her title and the responsibilities that come along with it. Enough with proper tea parties and elegant balls; what Harriet really wants is to attend an outrageous soiree where she can unleash her wildest whims and desires. But to attend such an event—especially if the event in question is Lord Justinian Strange's rollicking fete, filled with noble rogues and rotters, risqué ladies and illicit lovers—would be certain scandal. That's why she must disguise herself . . .

Looking forward to a night of uninhibited pleasure, Lord Strange is shocked to discover that beneath the clothes of a no-good rake is the most beautiful woman in the room. Why is a woman like her risking her reputation at his notorious affair? And can he possibly entice her to stay . . . forever?
07

Much Ado About You (Essex Sisters, #1)
When you're the oldest daughter, you don't get to have any fun!

Witty, orphaned Tess Essex faces her duty: marry well and marry quickly, so she can arrange matches for her three sisters -- beautiful Annabel, romantic Imogen and practical Josie. After all, right now they're under the rather awkward guardianship of the perpetually tipsy Duke of Holbrook. But just when she begins to think that all might end well, one of her sisters bolts with a horse-mad young lord, and her own fiancé just plain runs away.

Which leaves Tess contemplating marriage to the sort of man she wishes to avoid -- one of London's most infamous rakes. Lucius Felton is a rogue whose own mother considers him irredeemable! He's delicious, Annabel points out. And he's rich, Josie notes. But although Tess finally consents to marry him, it may be for the worst reason of all. Absurd as she knows it to be, she may have fallen utterly in love . . .
08

A marquess's sheltered only daughter, Lady Roberta St. Giles falls in love with a man she glimpses across a crowded ballroom: a duke, a game player of consummate skill, a notorious rakehell who shows no interest in marriage--until he lays eyes on Roberta.

Yet the Earl of Gryffyn knows too well that the price required to gain a coronet is often too high. Damon Reeve, the earl, is determined to protect the exquisite Roberta from chasing after the wrong destiny.

Can Damon entice her into a high-stakes game of his own, even if his heart is likely to be lost in the venture?

The Duke Is Mine (Fairy Tales, #3)
Destiny will be decided between the sheets in this all-new tale of The Princess and the Pea.

For Olivia Lytton, betrothal to the Duke of Canterwick—hardly a Prince Charming—feels more like a curse than a happily-ever-after. At least his noble status will help her sister, Georgiana, secure an engagement with the brooding, handsome Tarquin, Duke of Sconce, a perfect match for her in every way . . . every way but one. Tarquin has fallen in love with Olivia.

Quin never puts passion before reason. And reason says that Georgiana is his ideal bride. But the sensual, fiery, strong-willed Olivia ignites an unknown longing in him—a desire they are both powerless to resist. When a scandalous affair begins, they risk losing everything—Olivia's engagement, her sister's friendship, and their own fragile love. Only one thing can save them—and it awaits in the bedroom, where a magnificent mattress holds life-changing answers to the greatest romantic riddle of all.
10

Pleasure for Pleasure (Essex Sisters, #4)
Fueled by the knowledge that notoriety is better than failure, witty, unconventional Josie does what no proper young lady should--she challenges fate. She discards her corset and flirts outrageously. She attends the horse races and allows an arrogant rakehell to whisk her behind the stables for a surreptitious kiss . . . and is caught!

She doesn't want to marry the young hellion--but who's to help? Her chaperone keeps disappearing for mysterious appointments; her guardian is on his wedding trip; and his friend the Earl of Mayne is too busy staring into the eyes of his exquisite French fiancée.

Can a marriage forced by stuffy convention and unwilling desire become the match of the season?