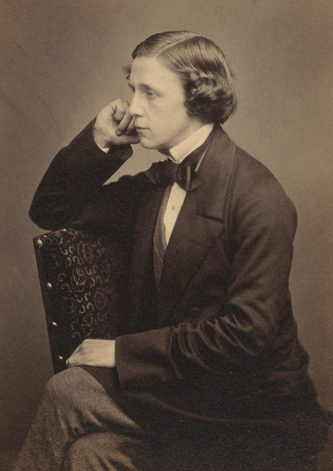 His most famous writings are Alice's Adventures in Wonderland and its sequel Through the Looking-Glass as well as the poems "The Hunting of the Snark" and "Jabberwocky", all considered to be within the genre of literary nonsense.

He also has works published under his real name.

Alice's Adventures in Wonderland & Through the Looking-Glass
"I can't explain myself, I'm afraid, sir," said Alice, "Because I'm not myself, you see."

When Alice sees a white rabbit take a watch out of its waistcoat pocket she decides to follow it, and a sequence of most unusual events is set in motion. This mini book contains the entire topsy-turvy stories of Alice's Adventures in Wonderland and Through the Looking-Glass, accompanied by practical notes and Martina Pelouso's memorable full-colour illustrations.
03

Through the Looking-Glass and What Alice Found There (Alice's Adventures in Wonderland, #2)
In 1865, English author CHARLES LUTWIDGE DODGSON (1832-1898), aka Lewis Carroll, wrote a fantastical adventure story for the young daughters of a friend. The adventures of Alice-named for one of the little girls to whom the book was dedicated-who journeys down a rabbit hole and into a whimsical underworld realm instantly struck a chord with the British public, and then with readers around the world. In 1872, in reaction to the universal acclaim *Alice's Adventures in Wonderland* received, Dodgson published this sequel. Nothing is quite what it seems once Alice journeys through the looking-glass, and Dodgson's wit is infectious as he explores concepts of mirror imagery, time running backward, and strategies of chess-all wrapped up in the exploits of a spirited young girl who parries with the Red Queen, Tweedledee and Tweedledum, and other unlikely characters. In many ways, this sequel has had an even greater impact on today's pop culture than the first book.
04

Alice's Adventures in Wonderland & Other Stories
05

The Complete Stories and Poems
This commemorative oversized volume of the complete collection of stories and poems of Lewis Carol showcases his ingenious use of word play, inverted logic and satire. Lewis Carroll was the pen name and, it could be claimed, the alter ego of the Reverend Charles Lutwidge Dodgson, a mathematician, writer and photographer. His creations, especially "Alice's Adventures in Wonderland" and "Through the Looking Glass and What Alice Found There," have been translated into countless languages and are as loved now as they have ever been. His neologisms ("curiouser and curiouser") and turns of phrase have forever infiltrated and enriched our language and culture.
06

Jabberwocky and Other Poems
Mathematician, author, photographer, and artist, Lewis Carroll (Charles Lutwidge Dodgson, 1832–1898) is best known as the creator of Alice's Adventures in Wonderland, but he was also a prolific poet. Over the course of almost 50 years, he created 150 poems, including nonsense verse, parodies, burlesques, acrostics, inscriptions, and more, many of them hilarious lampoons of some of the more sentimental and moralistic poems of the Victorian era.
This carefully chosen collection contains 38 of Carroll's most appealing verses, including such classics as "The Walrus and the Carpenter," "The Mock Turtle's Song," and "Father William," plus such lesser-known gems as "My Fancy," "A Sea Dirge," "Brother and Sister," "Hiawatha's Photographing," "The Mad Gardener's Song," "What Tottles Meant," "Poeta Fit, non Nascitur," "The Little Man That Had a Little Gun," and many others.
Filled with Carroll's special brand of imaginative whimsy and clever wordplay, this original anthology will delight fans of the author as well as other readers who relish a little laughter with their lyrics.
07

Lewis Carroll's magnificent nonsense poem The Hunting of the Snark features an unlikely cast of characters drawn from the Jabberwocky in Through the Looking Glass. This irresistible version is illustrated, and has an introduction by, Chris Riddell.

This is a luxury edition with both black and white and colour artwork, ribbon marker and metallic blue sprayed edges.

Alice in Wonderland: The Complete Collection
09

The Complete Works of Lewis Carroll
10

Alice in Wonderland / Hunting of the Snark
In Lewis Carroll's "Alice in Wonderland" a very real little girl named Alice follows a very remarkable rabbit and experiences one of the strangest adventures, and meets some of the oddest and best-loved characters in all literature: the Mad Hatter, the Queen of Hearts, the Cheshire Cat, and the White Rabbit, each one, more interesting and more entertaining than the previous. It is a world where everything impossible effortlessly becomes possible and everything real, unreal. In the hands of Lewis Carroll the heights of adventure are limited only by the reach of imagination. In the words of a contemporary of Carroll's, "if there be such a thing as perfection in children's tales