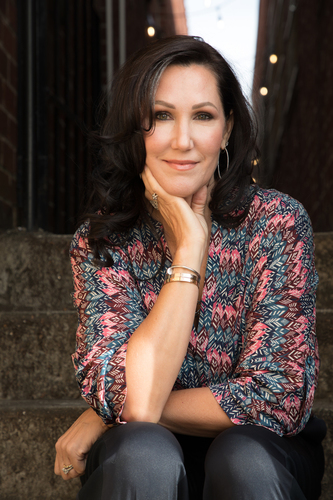 Kimberly Belle is the USA Today and internationally bestselling author of six novels, including her forthcoming domestic suspense, Stranger in the Lake (June 2020). Her third novel, The Marriage Lie, was a semifinalist in the 2017 Goodreads Choice Awards for Best Mystery & Thriller, and a #1 e-book bestseller in the UK and Italy. She’s sold rights to her books in a dozen languages as well as film and television options. A graduate of Agnes Scott College, Belle divides her time between Atlanta and Amsterdam.

The Marriage Lie
Even the perfect marriage has its dark side…

Iris and Will's marriage is as close to perfect as it can be: a large house in a nice Atlanta neighborhood, rewarding careers and the excitement of trying for their first baby. But on the morning Will leaves for a business trip to Orlando, Iris's happy world comes to an abrupt halt. Another plane headed for Seattle has crashed into a field, killing everyone on board, and according to the airline, Will was one of the passengers on this plane.

Grief-stricken and confused, Iris is convinced it all must be a huge misunderstanding. But as time passes and there is still no sign of Will, she reluctantly accepts that he is gone. Still, Iris needs answers. Why did Will lie about where he was going? What is in Seattle? And what else has he lied about? As Iris sets off on a desperate quest to find out what her husband was keeping from her, the answers she receives will shock her to her very core.
02

Dear Wife
From the bestselling author of The Marriage Lie and Three Days Missing comes a riveting new novel of suspense about a woman who, in a fight for survival, must decide just how far she'll go to escape the person she once loved

Beth Murphy is on the run...

For nearly a year, Beth has been planning for this day. A day some people might call any other Wednesday, but Beth prefers to see it as her new beginning--one with a new look, new name and new city. Beth has given her plan significant thought, because one small slip and her violent husband will find her.

A couple hundred miles away, Jeffrey returns home from a work trip to find his wife, Sabine, is missing. Wherever she is, she's taken almost nothing with her. Her abandoned car is the only evidence the police have, and all signs point to foul play.

As the police search for leads, the case becomes more and more convoluted. Sabine's carefully laid plans for her future indicate trouble at home, and a husband who would be better off with her gone. The detective on the case will stop at nothing to find out what happened and bring this missing woman home. Where is Sabine? And who is Beth? The only thing that's certain is that someone is lying and the truth won't stay buried for long.
03

Three Days Missing
When a child goes missing, two mothers’ lives collide in a shocking way in this suspenseful novel from the bestselling author of The Marriage Lie.

It’s every parent’s worst nightmare: the call that comes in the middle of the night.

When Kat Jenkins awakens to the police on her doorstep, her greatest fear is realized. Her nine-year-old son, Ethan, is missing—vanished from the cabin where he’d been on an overnight field trip with his class. Shocked and distraught, Kat rushes to the campground where he was last seen. But she’s too late; the authorities have returned from their search empty-handed after losing Ethan’s trail in the mountain forest.

Another mother from the school, Stef Huntington, seems like she has it all: money, prominence in the community, a popular son and a loving husband. She hardly knows Kat, except for the vicious gossip that swirls around Kat’s traumatic past. But as the police investigation unfolds, Ethan’s disappearance will have earth-shattering consequences in Stef’s own life—and the paths of these two mothers are about to cross in ways no one could have anticipated.

Racing against the clock, their desperate search for answers begins—one where the greatest danger could lie behind the everyday smiles of those they trust the most.
04

Chasing disasters around the globe keeps humanitarian aid worker Gia Andrews away from her own ground zero. Now, after sixteen years in jail for the murder of her stepmother in small-town Tennessee, Gia's father has come home to die of cancer. And she's responsible for his care.

Resuming the role of daughter to the town's most infamous murderer means confronting the past she's spent over a decade avoiding. But in the end, the truth about what really happened may have deadlier consequences than she could have ever anticipated…
05

The Ones We Trust
According to RT Book Reviews, "an emotionally moving, captivating story that is the perfect book club pick."

When former DC journalist Abigail Wolff attempts to rehabilitate her career, she finds herself at the heart of a US army cover-up involving the death of a soldier in Afghanistan -- with unspeakable emotional consequences for one family. As the story of what happened comes to light, Abigail will do anything to write it.

The more evidence she stumbles upon in the case, the fewer people it seems she can trust, including her own father, a retired army general. And she certainly never expected to fall in love with the slain soldier's brother, Gabe, a bitter man struggling to hold his family together. The investigation eventually leads her to an impossible choice, one of unrelenting sacrifice to protect those she loves.

Beyond the buried truths and betrayals, questions of family loyalty and redemption, Abigail's search is, most of all, a desperate grasp at carrying on and coping -- and seeking hope in the impossible.
06

Stranger in the Lake
Charlotte didn’t know her greatest risk was saying, “I do.”

When Charlotte married the wealthy widower Paul, it caused a ripple of gossip in their small lakeside town. They have a charmed life together, despite the cruel whispers about her humble past and his first marriage. But everything starts to unravel when she discovers a young woman’s body floating in the exact same spot where Paul’s first wife tragically drowned.

At first, it seems like a horrific coincidence, but the stranger in the lake is no stranger. Charlotte saw Paul talking to her the day before, even though Paul tells the police he’s never met the woman. His lie exposes cracks in their fragile new marriage, cracks Charlotte is determined to keep from breaking them in two.

As Charlotte uncovers dark mysteries about the man she married, she doesn’t know what to trust—her heart, which knows Paul to be a good man, or her growing suspicion that there’s something he’s hiding in the water.
07

Trust No One: The Marriage Lie\The Last Breath\The Ones We Trust
08

A Thousand Doors: An Anthology of Many Lives

The day Mia Jensen died, she finally got to live.

We’ve all played the “what if” game. For forty-year-old Mia Jensen, “what if” is a fact of life. Dissatisfied with her choices, she often dreams about what could have been. Now she has the chance to know. But that knowledge will cost her dearly. Only through death can she fully realize the value of her life.

After a terrible day, trying to figure out how she’s come to this point—alone, on the cusp of divorce––Mia hears a strange noise in her kitchen. When she investigates, she is attacked and left for dead. As Mia dies, she experiences some of the lives that could have been hers had she only made a different choice.

Can one woman find peace with the path she’s chosen before it slips through her fingers forever?

Through the unique voices of New York Times bestsellers and rising stars in women’s fiction, A THOUSAND DOORS examines how our smallest decisions create lasting effects, and asks the ultimate question—can we actually change our lives?

The Good Girl & The Marriage Lie
10

The Next Page: A Fiction Sampler for Book Clubs: The Gilded Life of Matilda Duplaine\Come Away with Me\Pretty Baby\The Good Girl\The Wonder of All Things\Little Mercies
Anyone who is part of a book club is very familiar with this constant question: What should we read next? Whether your club wants to travel back in time to exotic locations, or prefers to wrestle with big issues in a contemporary setting, this sampler of ten extraordinary novels has something for every book club: The Good Girl by Mary Kubica, The Wonder of All Things by Jason Mott, Little Mercies by Heather Gudenkauf, Madame Picasso by Anne Girard, The Returned by Jason Mott, The Last Breath by Kimberly Belle, I'll Be Seeing You by Suzanne Hayes and Loretta Nyhan, Teatime for the Firefly by Shona Patel, The Sweetest Hallelujah by Elaine Hussey, and The Mourning Hours by Paula Treick DeBoard.

Each excerpt is accompanied by a letter from the novel's editor explaining why the book is a perfect book club pick. There is also bonus material to enrich your discussions, including reading guides and author conversations.

So, read on, enjoy, find the perfect book and be the star of your book club.