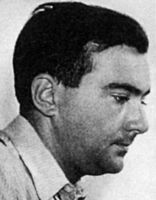 Born and bred in Philadelphia, David Goodis was an American noir fiction writer. He grew up in a liberal, Jewish household in which his early literary ambitions were encouraged. After a short and inconclusive spell at at the University of Indiana, he returned to Philadelphia to take a degree in journalism, graduating in 1937.

David Goodis is the author of books: Shoot the Piano Player, Dark Passage, Nightfall, The Wounded and the Slain (Hard Case Crime #31), The Burglar, Street of No Return, The Moon in the Gutter, Cassidy's Girl, The Blonde on the Street Corner, David Goodis: Five Noir Novels of the 1940s & 50s

Shoot the Piano Player
Once upon a time Eddie played concert piano to reverent audiences at Carnegie Hall. Now he bangs out honky-tonk for drunks in a dive in Philadelphia. But then two people walk into Eddie's life--the first promising Eddie a future, the other dragging him back into a treacherous past.

Shoot the Piano Player is a bittersweet and nerve-racking exploration of different kinds of loyalty: the kind a man owes his family, no matter how bad that family is; the kind a man owes a woman; and, ultimately, the loyalty he owes himself. The result is a moody thriller that, like the best hard-boiled fiction, carries a moral depth charge.
02

Dark Passage
Sentenced to life in San Quentin for the alleged murder of his wife, Vince Parry escapes in a desperate attempt to prove his innocence. A fugitive from justice, in the depths of despair, he finds refuge with a beautiful woman as he struggles to unravel a nightmarish plot.

First published as a magazine serial, Dark Passage was filmed in 1947 by Delmer Daves. Starring Humphrey Bogart and Lauren Bacall, it is regarded as a classic of noir filmmaking.
03

Jim Vanning has an identity crisis. Is he an innocent artist who just happens to have some very dangerous people interested in him? Or is he a killer on the lam from his last murder—with a satchel worth over $300,000 in tow?

Relentlessly focused, Nightfall may be David Goodis’ most accomplished novel. It is a fiendishly constructed maze, filled with unpredictable pitfalls and human predators whose authenticity only makes them more terrifying.

David Goodis (1917–1967), a former pulp, radio, and Hollywood script writer, is now recognized as a leading author of crime fiction. Besides sojourns in New York City and Hollywood, he lived primarily in Philadelphia.
04

Street of No Return
“David Goodis is the mystery man of hardboiled fiction.”—Geoffrey O’Brien

In Street of No Return, we meet the pathetic figure of Whitey. Once upon a time Whitey was a crooner with a million-dollar voice and a standing invitation from any woman who heard him use it. Until he had the bad luck to fall for Celia. And then nothing would ever be the same.

In Street of No Return, David Goodis works the magic that made him one of the most distinctive voices in hard-boiled fiction, creating a claustrophobic universe in which wounded men and women collide with cataclysmic force.
07

The Moon in the Gutter
In a back street in the rough end of Philadelphia, docker William Kerrigan obsesses over the mysterious suicide of his sister. Into a dive bar walks Lorretta Channing the beautiful, enigmatic socialite and sister of Newton the drunk. Loretta's the impossible dream, the escape route out of his hellhole existence, away from the crowded tenements, the shacks, the dark alleys. But Loretta may also hold the key to finding out what promptd his sister's death, the reason he can never break free.

The Moon in the Gutter is a fierce and heated tale of desire and revenge. Made into a film starring Gerard Depardieu and Nastassia Kinski, it remains an enthraling classic of American noir fiction.
08

Cassidy's Girl
They say that a man needs a woman to go to hell with. Cassidy had two. One was Mildred, the wife who kept him chained with ties of fear and jealousy and paralyzing sexual need. The other was Doris, a frail angel with a 100-proof halo and a bottle instead of a harp. With those two, Cassidy found that the ride to hell could be twice as fast.

Cassidy's Girl has all the traits that made its author a virtuoso of the hard-boiled: a fiercely compelling ploy; characters who self-destruct in spectacularly unpredictable ways; and an insider's knowledge of all the routes to the bottom.
09

The Blonde on the Street Corner
She took a final drag at the cigarette, flipped it away, and said, I don't get this line of talk. It's way over my head...Maybe you're waiting for some dream girl to come along in a coach drawn by six white horses, and she'll pick you up and haul you away to the clouds, where it's all milk and honey and springtime all year around. Maybe that's what you're waiting for. That dream girl.
Maybe, he murmurmed.
And then he looked at the blonde. His smile was soft and friendly and he said, I guess that's why I can't start with you. I'm waiting for the dream girl.

But the dream girl does not come. In the meantime Ralph must deal with the yearnings of everyday life and take what he is offered.

Written in 1954, The Blonde on the Street Corner is full of the passions and desires that are the hallmarks of a David Goodis novel.

David Goodis: Five Noir Novels of the 1940s & 50s
Among the pantheon of American crime writers—those masters of noir whose powerful vernacular style and dark and subversive themes transformed American culture and writing—David Goodis was a unique figure. Born in Philadelphia, he brought a jazzy, expressionist style and an almost hallucinatory intensity to his spare, passionate, uncompromising novels of mean streets and doomed people. Though little acknowledged during his lifetime, he has long enjoyed an international cult following, and his works have been adapted for the screen by directors including François Truffaut, Samuel Fuller, Jean-Jacques Beineix, and Jacques Tourneur.

Now, for the first time, his best work is collected in a single volume. Goodis experienced a brief celebrity when his novel Dark Passage (1946) became the basis for a popular movie starring Humphrey Bogart and Lauren Bacall. The story of a man railroaded for his wife’s murder and forced to assume a different identity after escaping from prison becomes in Goodis’s hands a lyrical evocation of urban fear and loneliness. Nightfall (1947) further develops the theme of the innocent pursued, as artist Jim Vanning becomes accidentally embroiled in a violent robbery and must evade criminals and police alike.

In The Burglar (1953), first published like all his later novels as a paperback original, Goodis explores his characteristic notion of the criminal gang as surrogate family, wracked by thwarted aspirations and contradictory desires. The book’s reluctant criminal hero might be taken as a self-portrait of Goodis himself: “The way he operated was quiet and slow, very slow … always artistic without knowing or interested in knowing that it was artistic, always accurate with it and always extremely unhappy with it.”

The Moon in the Gutter (1953) is one of Goodis’s many tours of the down-and-out neighborhoods of his native city. William Kerrigan’s pursuit of the riddle of his sister’s death in an obscure alleyway provides the starting point for a tortuous journey into “the darkness of all lost dreams.” In Street of No Return (1954), another skid row odyssey, a famous crooner scarred by violence descends into dereliction. From its opening in the freezing wind of a November street corner through its explosive ending, it is imbued with Goodis’s deep identification with “the unchartered society of the homeless and the hopeless.”