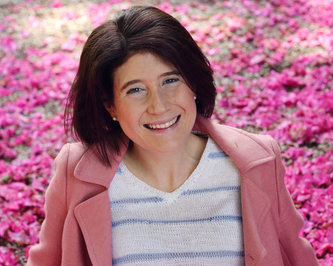 I was brought up in Germany, France and England by a mother who never stopped telling stories. From the moment I was old enough to hold a pen, I set about writing my own, often late into the night – or behind my Maths textbook at school. My maiden name is Virginia Woods: I was named after two great women, Virginia Wade and Virginia Woolf, in the hope I would be a writer and a tennis star. My early years were those of a scribbling, rain-loving child who prayed for lightning to strike my tennis coach.

After studying at Oxford, I started writing regularly whilst working as an English Teacher and Housemistress. I now write full time for both adults and young adults. My fiction tackles contemporary issues, often through the lens of family life.

My debut novel, 'What Milo Saw,' came out in 2014: it reflects the humour and tragedy of contemporary Britain through four very different voices: 9 year old Milo, 92 year old Lou (Milo’s Gran), 27 year old Sandy (Milo’s mum) and 24 year old Tripi (a Syrian refugee). It explores a range of issues from the nursing home crisis in the UK, coping as a single mum, being a refugee to living with a disability - Milo has a degenerative eye condition called Retinitis Pigementosa which means he has no periphery vision - but, paradoxically, he picks up on more of what's going on than those around him, especially in his Gran's nursing home.

My second novel, 'The Return of Norah Wells' came out in 2016: it tells the story of a mother who walked out on her young family and came back six years later expecting to pick up where she left off . The novel takes place over a May bank holiday and, like Milo, is told through several points of view: Willa (7), Ella (14), Norah (The Mother Who Left), Fay (The Mother Who Stayed) and Adam - the dad. It's a real family drama and I hope that it will lead to some interesting discussions amongst my readers about what it means to be a mum today.

My third novel, 'Born To Be Yours', tells the story of seven year old Jonah, a Kenyan boy abandoned at Heathrow airport. He is taken in by social services and matched with Rosie and Sam Keep, a British couple who long to have child to call their own. As the three of them are brought together they are thrown into a drama which will challenge their notions of what it means to be a family and Rosie and Sam have to confront the hardest question of all: how far are they prepared to go for someone who isn't their own child?

I'm working on my fourth novel for adults, 'Forgetting You', about a man found in Regent's Park with no memory of who he is or where is from. This will be out in 2018.

In 2017 I published my first Young Adult novel, 'Wishbones'. It's been a dream of mine to write for both adults and young adults. The story is also contemporary: it's about fourteen year old Feather Tucker who lives with her morbidly obese mother who has been given six months to live. Feather sees it as her duty to save her mother's life but as she begins to dig into her parents' past to find out why her mother got so sick, Feather's life and that of the people in the small village where she and her family live, change forever.

I live currently live in Concord, New Hampshire, with my husband, Hugh, my two little girls, Tennessee Skye and Somerset Wilder and a wonderful white dogcat (he comes on walks with us), Seb. I love to write in coffee shops and I walk every day, which is as much part of my creative process as putting words on the page. Nothing makes me happier than knowing that readers are enjoying my stories so please get in touch and share your experience of reading my novels.

Do also take a look at my website (www.virginiamacgregor.com) where you can find out more about my life as a writer, upcoming books and events.

Virginia Macgregor is the author of books: What Milo Saw, The Astonishing Return of Norah Wells, Before I Was Yours: How Far Would You Go for a Child Who Wasn't Yours?, Wishbones, As Far as the Stars, You Found Me: New beginnings, second chances, one gripping family drama, Wishbones: Free Sample, Der Junge, der mit dem Herzen sah: Roman

What Milo Saw
Nine-year-old Milo suffers from retinitis pigmentosa: his eyes are slowly failing, and he will eventually go blind. But for now, he sees the world through a pin hole and notices things other people don't. When Milo's beloved 92-year-old gran succumbs to dementia and moves into a nursing home, Milo begins to notice things amiss at the home. The grown-ups won't listen when he tries to tell them something's wrong so with just Tripi, the nursing home's cook, and Hamlet, his pet pig, to help, Milo sets out on a mission to expose the nursing home and the sinister Nurse Thornhill.
02

The Astonishing Return of Norah Wells
One ordinary morning, Norah walked out of her house on Willoughby Street and never looked back. Six years later, she returns to the home she walked away from only to find another woman in her place. Fay held Norah's family together after she disappeared, she shares a bed with Norah's husband and Norah's youngest daughter calls Fay 'Mummy'.

Now that Norah has returned, everyone has questions. Where has she been? Why did she leave? And why is she back? As each member of the family tries to find the answers they each need, they must also face up to the most pressing question of all - what happens to The Mother Who Stayed when The Mother Who Left comes back?

From the author of What Milo Saw, comes this powerful, emotional and perceptive novel about what it takes to hold a family together and what you're willing to sacrifice for the ones you love.
03

Before I Was Yours: How Far Would You Go for a Child Who Wasn't Yours?
Sam and Rosie Keep have always wanted children of their own but life hasn't worked out that way for them. The only option available to them now is adoption: they'll do anything to have a child to love.

Seven-year-old Jonah is far away from home and his mama promised he'd be looked after in England. But the man who's meant to be taking care of him has disappeared and now Jonah's all alone.

When Sam and Rosie meet Jonah they're certain they've found their son, and open their home and their hearts to him. Finally, their family is complete.

And then the unthinkable happens and life changes for all three members of the Keep family. Suddenly Sam and Rosie must answer an impossible question: how far are they willing to go for a child who isn't really theirs?
04

When Feather comes home on New Year’s Eve to find her mother – one of Britain’s most obese women- in a diabetic coma, she realises something has to be done to save her mum’s life. But when her Mum refuses to co-operate Feather realises that the problem run deeper than just her mum’s unhealthy appetite.

Over time, Feather’s mission to help her Mum becomes an investigation. With the help of friends old and new, and the hindrance of runaway pet goat Houdini, Feather’s starting to uncover when her mum’s life began to spiral out of control and why. But can Feather fix it in time for her mum to watch her swim to victory? And can she save her family for good?
05

As Far as the Stars
Praise for Virginia Macgregor:

'I defy you not to fall in love' Clare Mackintosh


How do you change what’s already written in the stars?


Christopher is the sort of guy that no one notices, yet when Air catches sight of him making intricate paper birds in the airport, she can’t look away.

But their worlds are about to collide in ways they never expected. Someone they love is on Flight 0217 from London Heathrow. And it’s missing.

Convinced that her brother was on a different flight, Air drives them hundreds of miles across the country, on a trip that will change their lives forever.

But how do you tell the person you’re falling for that you might just be the reason their life has fallen apart?
06

You Found Me: New beginnings, second chances, one gripping family drama
One summer morning, Isabel and her eleven-year-old daughter River encounter a rain-soaked man sitting alone on a bench in Regents' Park. They ask him if he's okay. But he doesn't know. He doesn't know the answer to any of their questions - not even his name. Isabel takes him to the hospital she works at, but when the tests show there's nothing physically wrong, she realises she can't walk away. She promised River that they would help this man, but with no way to identify him, Isabel worries about what secrets his memory loss might be hiding. Can they trust him? ? Virginia Macgregor, 2018 (p) Oakhill, 2019
07