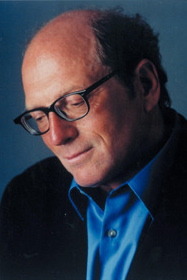 Oscar Hijuelos (born August 24, 1951) is an American novelist. He is the first Hispanic to win a Pulitzer Prize for Fiction.

Hijuelos was born in New York City, in Morningside Heights, Manhattan, to Cuban immigrant parents. He attended the Corpus Christi School, public schools, and later attended Bronx Community College, Lehman College, and Manhattan Community College before matriculating into and studying writing at the City College of New York (B.A., 1975; M.A. in Creative Writing, 1976). He then practiced various professions before taking up writing full time. His first novel, Our House in the Last World, was published in 1983 and received the 1985 Rome Prize, awarded by the American Academy in Rome. His second novel, The Mambo Kings Play Songs of Love, received the 1990 Pulitzer Prize for Fiction. It was adapted for the film The Mambo Kings in 1992 and as a Broadway musical in 2005.

Hijuelos has taught at Hofstra University and is currently affiliated with Duke University, where he is a member of the faculty of the Department of English.

Oscar Hijuelos is the author of books: The Mambo Kings Play Songs of Love, Mr. Ives' Christmas, Dark Dude, Beautiful Maria of My Soul, Twain & Stanley Enter Paradise, The Fourteen Sisters of Emilio Montez O'Brien, Empress of the Splendid Season, A Simple Habana Melody, Our House in the Last World, Thoughts Without Cigarettes

Mr. Ives' Christmas
Hijuelos' novel tells the story of Mr. Ives, who was adopted from a foundling's home as a child. When we first meet him in the 1950s, Mr. Ives is very much a product of his time. He has a successful career in advertising, a wife and two children, and believes he is on his way to pursuing the typical American dream. But the dream is shattered when his son Robert, who is studying for the priesthood, is killed violently at Christmas. Overwhelmed by grief and threatened by a loss of faith in humankind, Mr. Ives begins to question the very foundations of his life.

Part love story—of a man for his wife, for his children, for God—and part meditation on how a person can find spiritual peace in the midst of crisis, Mr. Ives' Christmas is a beautifully written, tender and passionate story of a man trying to put his life in perspective. In the expert hands of Oscar Hijuelos, the novel speaks eloquently to the most basic and fulfilling aspects of life for all of us.
03

He didn't say good-bye. He didn't leave a phone number. And he didn't plan on coming back - ever.

In Wisconsin, Rico could blend in. His light hair and lighter skin wouldn't make him the "dark dude" or the punching bag for the whole neighborhood. The Midwest is the land of milk and honey, but for Rico Fuentes, it's really a last resort. Trading Harlem for Wisconsin, though, means giving up on a big part of his identity. And when Rico no longer has to prove that he's Latino, he almost stops being one. Except he can never have an ordinary white kid's life, because there are some things that can't be left behind, that can't be cut loose or forgotten. These are the things that will be with you forever.... These are the things that will follow you a thousand miles away.

For anyone who loved The Outsiders -- and for anyone who's ever felt like one -- Pulitzer Prize-winning novelist Oscar Hijuelos brings to life a haunting choice and an unforgettable journey about identity, misidentity, and all that we take with us when we run away.
04

Beautiful Maria of My Soul
In 1950s Manhattan, Nestor and Cesar Castillo play the sumptuous mambo beats of their native Cuba, where their biggest hit, “Beautiful Maria of My Soul,” earns them a spot on “I Love Lucy” –but their hopes for the future are dashed by a tragic accident. Hijuelos returns to the story of his Pulitzer-Prize winning The Mambo Kings Play Songs of Love, this time telling it from Maria’s perspective. Maria arrives in Havana, one of the great beauties in a city of gorgeous chorus girls, and becomes the true passion of Nestor’s life. Having fled Cuba and her life there, Maria has never forgotten Nestor or the promise of what could have been, her memories set to the song bearing her name.
05


Hijuelos was fascinated by the Twain-Stanley connection and eventually began researching and writing a novel that used the scant historical record of their relationship as a starting point for a more detailed fictional account. It was a labor of love for Hijuelos, who worked on the project for more than ten years, publishing other novels along the way but always returning to Twain and Stanley; indeed, he was still revising the manuscript the day before his sudden passing in 2013.


The resulting novel is a richly woven tapestry of people and events that is unique among the author's works, both in theme and structure. Hijuelos ingeniously blends correspondence, memoir, and third-person omniscience to explore the intersection of these Victorian giants in a long vanished world.


From their early days as journalists in the American West, to their admiration and support of each other's writing, their mutual hatred of slavery, their social life together in the dazzling literary circles of the period, and even a mysterious journey to Cuba to search for Stanley's adoptive father, TWAIN & STANLEY ENTER PARADISE superbly channels two vibrant but very different figures. It is also a study of Twain's complex bond with Mrs. Stanley, the bohemian portrait artist Dorothy Tennant, who introduces Twain and his wife to the world of séances and mediums after the tragic death of their daughter.


A compelling and deeply felt historical fantasia that utilizes the full range of Hijuelos' gifts, TWAIN & STANLEY ENTER PARADISE stands as an unforgettable coda to a brilliant writing career.

Empress of the Splendid Season
Oscar Hijuelos vividly brings to life the joys, desires, and disappointment of American life witnessed through the experience of a formerly prosperous Cuban émigré named Lydia Espana—now a cleaning woman in New York. In magnetic prose, he juxtaposes Lydia's tale with the stories of her clients, contrasting her experiences with the secret lives of those for whom she works. No one writes better of love or the pulse of a city, nor has any writer better captured the complexity inherent in the emigration experience; how assimilation is at once the achievement of dreams, yet also a loss of the past. Empress of the Splendid Season is Hijuelos at his masterful best, a novel filled with incantatory, rhythmic prose and rich in heartfelt vision.
08

A Simple Habana Melody
It is 1947, and Israel Levis, a Cuban composer whose life had once been a dream of music, love, and sadness, returns to Cuba after being mistakenly imprisoned during the Nazi occupation of France.

When Levis arrives back in Habana, his mind returns to an unrequited romance with the alluring Rita Valladares, a singer for whom Levis had written his most famous song, "Rosas Puras." This 1928 composition became the most famous rumba in the world and changed American and European tastes in music and dance forever.

A love story—of art, family, and country—A Simple Habana Melody is a virtuoso performance from one of our most important writers.
09

Our House in the Last World
Bearing all the hallmarks of Hijuelos's later work—exuberance, passion, honesty, and humor—this debut novel was heralded on its publication twenty years ago as "virtuoso writing...a novel of great warmth and tenderness" (New York Times Book Review). Filled with the sights and sounds of Cuba's Oriente province and New York City, the music and films of the fifties, lusty fantasies and the toughest of life's realities, it is the unforgettable story of Hector Santinio, the American-born son of Cuban immigrants, who is haunted by tales of "home" (a Cuba he has never seen) and by the excesses and then the death of his loving father. This edition includes a new autobiographical introduction by the author, reflecting on how he came to write Our House in the Last World, and a new afterword in which he comments on the story.
10

Thoughts Without Cigarettes
The beloved Pulitzer Prize-winning novelist turns his pen to the real people and places that have influenced his life and, in turn, his literature. Growing up in 1950's working-class New York City to Cuban immigrants, Hijuelos journey to literary acclaim is the evolution of an unlikely writer.

Oscar Hijuelos has enchanted readers with vibrant characters who hunger for success, love, and self-acceptance. In his first work of nonfiction, Hijuelos writes from the heart about the people and places that inspired his international bestselling novels.

Born in Manhattan's Morningside Heights to Cuban immigrants in 1951, Hijuelos introduces readers to the colorful circumstances of his upbringing. The son of a Cuban hotel worker and exuberant poetry- writing mother, his story, played out against the backdrop of an often prejudiced working-class neighborhood, takes on an even richer dimension when his relationship to his family and culture changes forever. During a sojourn in pre-Castro Cuba with his mother, he catches a disease that sends him into a Dickensian home for terminally ill children. The yearlong stay estranges him from the very language and people he had so loved.

With a cast of characters whose stories are both funny and tragic, Thoughts Without Cigarettes follows Hijuelos's subsequent quest for his true identity into adulthood, through college and beyond-a mystery whose resolution he eventually discovers hidden away in the trappings of his fiction, and which finds its most glorious expression in his best-known book, The Mambo Kings Play Songs of Love. Illuminating the most dazzling scenes from his novels, Thoughts Without Cigarettes reveals the true stories and indelible memories that shaped a literary genius.