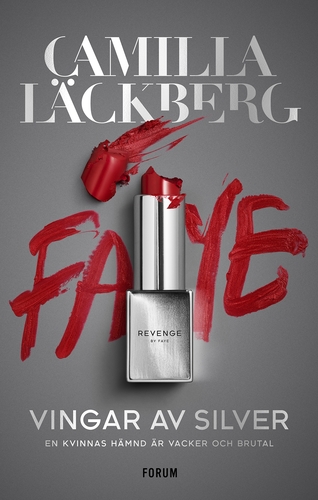 Before she became one of Sweden’s most popular crime writers, Camilla Läckberg (b. 1974) worked as a marketing director and product manager for several years. Her first two crime novels, Isprinsessan (The Ice Princess) and Predikanten (The Preacher), received rave reviews from the Swedish press and quickly found a large readership. But her big breakthrough came when Stenhuggaren (The Stonecutter) was nominated for The Crime Novel of the Year award in 2005, and also when Olycksfågeln (The Stranger) and Tyskungen (The Hidden Child) were made lead titles in Bonnier’s Book Club.

Camilla’s books have gained even more popularity after being adapted into a TV-series, produced by SVT (Swedish Television).

In April 2017 her tenth book in the Fjällbacka-series, Häxan, was released – claimed to be her best novel so far! In 2019 Camilla received a diamond book for Häxan, since it has sold in over 300 000 copies in Sweden!

And in the spring of 2019 heralds the global launch of The Golden Cage, the first of two dark and suspenseful novels by Camilla Läckberg. After ten internationally bestselling novels and over 26 million copies sold, Läckberg’s next adventure will be a psychological suspense duology.

The Golden Cage was the most sold book in Sweden 2019.

The Ice Princess (Patrik Hedström, #1)
Returning to her hometown of Fjallbacka after the funeral of her parents, writer Erica Falck finds a community on the brink of tragedy. The death of her childhood friend, Alex, is just the beginning. Her wrists slashed, her body frozen in an ice-cold bath, it seems that she has taken her own life.

Erica conceives a book about the beautiful but remote Alex, one that will answer questions about their own shared past. While her interest grows into an obsession, local detective Patrik Hedstrom is following his own suspicions about the case. But it is only when they start working together that the truth begins to emerge about a small town with a deeply disturbing past.
02

The Preacher (Patrik Hedström, #2)
Hot on the heels of her phenomenal American debut, The Ice Princess, Camilla Läckberg brings readers back to the quiet, isolated fishing village in Sweden where dangerous secrets lie just beneath the community’s tranquil surface.

During an unusually hot July, detective Patrik Hedstrom and Erica Falck are enjoying a rare week at home together, nervous and excited about the imminent birth of their first baby. Across town, however, a six-year-old boy makes a gruesome discovery that will ravage their little tourist community and catapult Patrik into the center of a terrifying murder case.

The boy has stumbled upon the brutally murdered body of a young woman, and Patrik is immediately called to lead the investigation. Things get even worse when his team uncovers, buried beneath the victim, the skeletons of two campers whose disappearance had baffled police for decades. The three victims’ injuries seem to be the work of the same killer, but that is impossible: the main suspect in the original kidnappings committed suicide twenty-four years ago.

When yet another young girl disappears and panic begins to spread, Patrik leads a desperate manhunt to track down a ruthless serial killer before he strikes again.
03

The Hidden Child (Patrik Hedström, #5)
Crime writer Erica Falck is shocked to discover a Nazi medal among her late mother’s possessions. Haunted by a childhood of neglect, she resolves to dig deep into her family’s past and finally uncover the reasons why. Her enquiries lead her to the home of a retired history teacher. He was among her mother’s circle of friends during the Second World War but her questions are met with bizarre and evasive answers. Two days later he meets a violent death.

Detective Patrik Hedström, Erica’s husband, is on paternity leave but soon becomes embroiled in the murder investigation. Who would kill so ruthlessly to bury secrets so old? Reluctantly Erica must read her mother’s wartime diaries. But within the pages is a painful revelation about Erica’s past. Could what little knowledge she has be enough to endanger her husband and newborn baby? The dark past is coming to light, and no one will escape the truth of how they came to be . . .
04

The Drowning (Patrik Hedström, #6)
Christian Thydell’s dream has come true. His debut novel, The Mermaid, has been published to rave reviews. So why is he as distant and unhappy as ever?

When crime writer Erica Falck, who helped Christian discover and develop his talents, learns he has been receiving anonymous threats, she investigates not just the messages but also the young author mysterious past. Then, one of Christian’s closet friends, Magnus, goes missing.

Erica’s husband, Detective Patrik Hedström, has his worst suspicions confirmed as the mind-games aimed at Christian become a disturbing reality. Christian's group of friends—a “gang of four” from childhood—is a tangled web of relationships, love triangles, and family secrets that Erica and Patrick must unravel in order to discover what really happened to Magnus and who is still threatening Christian.

But, with the victims themselves concealing evidence, the investigation is going nowhere. Is their silence driven by fear or guilt? What is the secret they would rather die to protect than live to see revealed?
06

Olycksfågeln (Patrik Hedström, #4)
A string of suspicious deaths points to a potential serial killer who has turned his eye toward Fjällbacka and her dark forests, where two children vanished decades before.

A local woman is killed in a tragic car crash, but it isn’t a clear-cut drunk driving case. The victim’s blood contains high alcohol levels, yet she rarely drank a drop. Meanwhile, a new television series begins shooting in Fjällbacka, and as cameras shadow the stars’ every move, tempers start to flare. When a drunken party ends with an unpopular contestant’s murder, all eyes turn to the cast and crew. Could there be a murderer among them? The ratings spike as the country tunes in to a real life murder mystery.

Detective Patrik Hedstrom finds himself increasingly unable to focus on the strange circumstances of the first case, but what if that holds the key to a series of other unsolved cases across Sweden? Under the unforgiving media spotlight, Patrik tackles his most challenging investigation yet.
07

January, Fjällbacka. A semi-naked girl wanders through the woods in freezing cold weather. When she finally reaches the road, a car comes out of nowhere. It doesn’t manage to stop.

By the time Detective Patrik Hedström receives word of the accident, the girl has already been identified. Four months ago she disappeared on her way home from the local riding school, and no one has seen her since. It quickly becomes clear that she has been subjected to unimaginably brutal treatment. And it’s likely she’s not the only one.

Meanwhile, Patrik’s wife, crime writer Erica Falck, is looking into an old case – a family tragedy that led to a man’s death. His wife was convicted of murder, but Erica senses that something isn’t right. What is the woman hiding? As Erica digs deeper, the past starts to cast a shadow over the present and Patrik is forced to see his investigation in a whole new light.
10