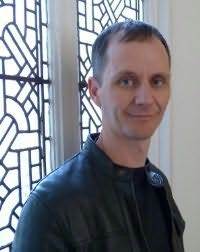 James Carol was born in Scotland in 1969, where he spent his early years. He moved to England in the eighties and has lived there ever since. At various times he has worked as a guitarist, sound engineer, guitar tutor, journalist, and a horse riding instructor.

Although the novels are written as a series, James approaches each book as a stand-alone. Each story is set in a different location, and has a different cast of characters. The beauty of this approach is that the novels can be read out of order.

When he’s not writing, James spends his time training horses and riders. An accomplished guitarist, he relaxes by writing and recording music. He lives in Hertfordshire with his wife and two children.

The son of one of America's most renowned serial killers, Winter has spent his life trying to distance himself from his father's legacy. Once a rising star at the FBI, he is now a freelance consultant, jetting around the globe helping local law enforcement agencies with difficult cases. He's not got Da Vinci's IQ, but he's pretty close.

When he accepts a particularly disturbing case in London, Winter arrives to find a city in the grip of a cold snap, with a psychopath on the loose who likes abducting and lobotomising young women. Winter must use all his preternatural brain power in order to work out who is behind the attacks, before another young woman becomes a victim.

As Winter knows all too well, however, not everyone who's broken can be fixed.
02

Six years ago a young married couple were found brutally stabbed to death in their home in Upstate New York. Local police arrested a suspect who later committed suicide. But what if the police got it wrong?

Ex-FBI profiler Jefferson Winter is drawn into a deadly cat-and-mouse game with a mysterious female psychopath as she sets him a challenge: find out what really happened six years ago.

The clock is ticking, and as Winter is about to find out, the endgame is everything…
03

So far there's just one body, but there are going to be more. A deadline has been set, the clock is ticking, and Winter has just thirteen and a half hours to track down the killer, before he strikes again.

Winter knows all about secrets. His father, one of America's most notorious serial killers, had everyone fooled for years. Winter also knows that the problem with secrets is that they have a nasty habit of turning against you when you least expect it.
04

Defying FBI protocol, Yoko makes a detour to Sarasota to entice Jefferson Winter to join the case. Winter has now graduated from college and is playing piano in a tourist bar. At first he's reluctant to get involved but that's the thing with Winter, what he says and what he means are usually two different things. All Yoko knows is that he's the only person who can help her before the Sandman claims another two victims . . . but what Winter doesn't know is that Yoko might be the only person who can help him come to terms with his past.

The Quiet Man (Jefferson Winter, #4)
What scares you?

In Vancouver, the wife of a millionaire is dead following an explosion in her own home.

Everyone thinks her husband is responsible, but former FBI profiler Jefferson Winter isn't so sure. The method is too perfect; the lack of mistakes, uncanny. He's seen a series of carefully orchestrated murders - once a year, on exactly the same day, a woman dies in a situation just like this one.

That date is fast approaching and Winter knows another victim has been selected. Can he identify the quiet man before he strikes again?
06

Special Agent Yoko Tanaka is one of the best profilers in the FBI. She's observant, smart and professional, but doesn't really play well with others. She's been called in to consult on the case of 'Valentino', a killer who steals his victims' hearts. Literally.

With five women already dead, time is running out for the police to catch the killer before he strikes again. Within twenty-four hours of Yoko's arrival they have a suspect in custody: a precocious nineteen-year-old kid called Jefferson Winter whose IQ is off the charts. He's also a textbook psychopath and the son of one of America's most notorious serial killers. Not only does he confess to the murders, he knows details of the crimes that only the killer could know. It's an open and shut case, or is it?

17 Church Row
For fans of J. P. Delaney's The Girl Before comes a thriller that makes us question our relationship with technology and the lengths we would go to, to keep our family safe.

Three years ago, Ethan and Nikki Rhodes suffered a devastating loss. Their four-year-old daughter Grace was tragically killed when she ran from their garden into the path of a car. Ethan, a radio personality, escapes into work, while Nikki quits her job to care for their remaining child, Grace's twin sister, Bella, who hasn't spoken since that night.

Trying to give the family a fresh start, Ethan moves them to a revolutionary house designed by the world-famous architect, Catriona Fisher. For the Rhodes', this is a life-changing move because a key feature of the house is the state of the art security system that allows them to be completely safe from the outside world within their own home.

But what if what they fear most is actually inside the house? What if 17 Church Row isn't the safe haven that they think it is?
08

Jefferson Winter is at the beginning of his FBI career. He's young and unpredictable, but he has a gift - he can understand the mind of a murderer like no one else.

Winter is in Las Vegas with Yoko Tanaka, a tough agent with the unenviable task of showing him the ropes. The bodies of three young women have been found and each of them is missing a limb.

If the case is to be solved, Winter must be free to act - yet Tanaka's superiors are watching closely, and it soon becomes clear that this killer doesn't make mistakes.

The next full-length Jefferson Winter novel, The Quiet Man, will be published in May 2017.
09