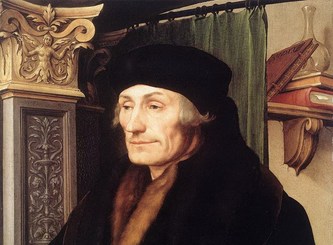 Erasmus was a classical scholar and wrote in a pure Latin style. Among humanists he enjoyed the sobriquet "Prince of the Humanists", and has been called "the crowning glory of the Christian humanists". Using humanist techniques for working on texts, he prepared important new Latin and Greek editions of the New Testament, which raised questions that would be influential in the Protestant Reformation and Catholic Counter-Reformation. He also wrote On Free Will, The Praise of Folly, Handbook of a Christian Knight, On Civility in Children, Copia: Foundations of the Abundant Style, Julius Exclusus, and many other works.

Erasmus lived against the backdrop of the growing European religious Reformation, but while he was critical of the abuses within the Catholic Church and called for reform, he kept his distance from Luther and Melanchthon and continued to recognise the authority of the pope, emphasizing a middle way with a deep respect for traditional faith, piety and grace, rejecting Luther's emphasis on faith alone. Erasmus remained a member of the Roman Catholic Church all his life, remaining committed to reforming the Church and its clerics' abuses from within. He also held to the Catholic doctrine of free will, which some Reformers rejected in favor of the doctrine of predestination. His middle road approach disappointed and even angered scholars in both camps.

Erasmus died suddenly in Basel in 1536 while preparing to return to Brabant, and was buried in the Basel Minster, the former cathedral of the city. A bronze statue of him was erected in his city of birth in 1622, replacing an earlier work in stone.

Erasmus is the author of books: Praise of Folly, Discourse on Free Will, The Essential Erasmus, The Education of a Christian Prince with the Panegyric for Archduke Philip of Austria, Luther and Erasmus: Free Will and Salvation, Ten Colloquies, Lof der zotheid, The Complaint of Peace, The Adages of Erasmus, A Handbook on Good Manners for Children: De Civilitate Morum Puerilium Libellus

Discourse on Free Will
Desiderius Eramsus (1466/9-1536) was the most renowned scholar of his age, a celebrated humanist and Classicist, and the first teacher of Greek at Cambridge. An influential figure in the Protestant Reformation, though without ever breaking from the Church himself, he satirised both human folly and the corruption of the Church. Martin Luther (1483-1546) was the founder of the German Reformation. His 95 Theses became a manifesto for reform of the Catholic Church and led to his being tried for heresy. He remained in Germany, Professor of Biblical Exegesis at the University of Wittenburg, until his death, publishing a large number of works, including three major treatises and a translation of the New Testament into German. Comprising Erasmus's The Free Will and Luther's The Bondage of the Will, Discourse on Free Will is a landmark text in the history of Protestantism. Encapsulating the perspective on free will of two of the most important figures in the history of Christianity, it remains to this day a powerful, thought-provoking and timely work. Translated and edited by Ernst F. Winter
03

The Essential Erasmus
In his own day a center of controversy, in the four hundred years since his death known too often solely as an apostle of mockery and irreverence, Erasmus can be seen today in a new light—as a humanist whose concen is at once contemporary and Christian.The Essential Erasmus is the first single volume in English to show the full spectrum of this Renaissance man's thought, which is no less profound because it is expressed with the grace, wit, and ironic detachment only a great writer can achieve.

Contains the full text of In Praise of Folly
04

The Education of a Christian Prince with the Panegyric for Archduke Philip of Austria
This is a new student edition of Erasmus' crucial treatise on political theory and also contains a new, excerpted translation from his Panegyric. The Education of a Christian Prince is one of the most important "advice-to-princes" texts published in the Renaissance and was dedicated to Charles V. It is a strongly pacifist work in which Erasmus sought to ensure that the prince governed justly and benevolently. This edition also includes an original introduction, a chronology of the life and work of Erasmus, and a comprehensive guide to further reading.
05

Luther and Erasmus: Free Will and Salvation
This volume includes the texts of Erasmus's 1524 diatribe against Luther, De Libero Arbitrio, and Luther's violent counterattack, De Servo Arbitrio. E. Gordon Rupp and Philip Watson offer commentary on these texts as well.

Long recognized for the quality of its translations, introductions, explanatory notes, and indexes, the Library of Christian Classics provides scholars and students with modern English translations of some of the most significant Christian theological texts in history. Through these works--each written prior to the end of the sixteenth century--contemporary readers are able to engage the ideas that have shaped Christian theology and the church through the centuries.
06

The Complaint of Peace
Desiderus Erasmus was one of the greatest scholars of all time. He lived at the time of the Renaissance, in the late 15th to early 16th centuries, a period of profound change, and a time when every European nation managed to go to war with another European nation. "The Complaint of Peace" grew from his reaction to his warlike times. His desire for peace permeates his work. Now, 500 years later, Peace's words still retain their relevance.
09

The Adages of Erasmus
Erasmus was fascinated by proverbs and prepared a collection of more than 4,000 of them, accompanying each with his comments, sometimes in a few lines and sometimes in full-scale essays. His massive compendium, characterized by his wit, his elegance, his bursts of satire alternating with serious views, was among the most learned and widely circulated of Renaissance books. This selection emphasizes Erasmus' skill in explaining the proverbs, shows how he made his book, and demonstrates the way in which many of the proverbs moved into the English language. The text is illustrated with images by Brueghel and D?rer and examples of proverb use from emblem books.

Over eighty proverb essays are presented here. Some are masterpieces of social criticism ('War is sweet to those who have never tried it'), others provide scholarly explanations of philosophical ideas or gestures and customs ('Thumbs up'). Many of the proverbs have passed into modern usage ('Know thyself', To give someone the finger' 'Well begun is half done'), some even retaining their Latin form ('Deus ex machina'). And a few, it turns out, were created by Erasmus himself through his occasional misinterpretation of the ancient languages ('Pandora's box', 'To call a spade a spade').

This edition replaces the pioneering work by Margaret Mann Phillips, providing more essays and more detailed source and background information for the texts. It is based on the translations and scholarship of the Collected Works of Erasmus - mostly that of Sir Roger Mynors but also the work of Phillips herself.
10

A Handbook on Good Manners for Children: De Civilitate Morum Puerilium Libellus
The first treatise in Western Europe on the moral and practical education of children was published in 1530 by an author who was outraged at the uncouth and undisciplined youth of his time. It is surprisingly relevant today!