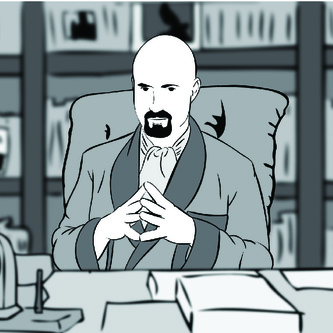 Scott Meyer has been a radio DJ, a stand-up comic, a writer for video games, an office manager, and a pretend ghost bellhop.

He is the creator of the comic strip Basic Instructions, and has now written a novel.

He and his wife live in Florida, to be close to their cats.

Off to Be the Wizard (Magic 2.0, #1)
Martin Banks is just a normal guy who has made an abnormal discovery: he can manipulate reality, thanks to reality being nothing more than a computer program. With every use of this ability, though, Martin finds his little “tweaks” have not escaped notice. Rather than face prosecution, he decides instead to travel back in time to the Middle Ages and pose as a wizard.

What could possibly go wrong?

An American hacker in King Arthur’s court, Martin must now train to become a full-fledged master of his powers, discover the truth behind the ancient wizard Merlin… and not, y’know, die or anything.
02

Spell or High Water (Magic 2.0, #2)
The adventures of an American hacker in Medieval England continue as Martin Banks takes his next step on the journey toward mastering his reality-altering powers and fulfilling his destiny.

A month has passed since Martin helped to defeat the evil programmer Jimmy, and things couldn’t be going better. Except for his love life, that is. Feeling distant and lost, Gwen has journeyed to Atlantis, a tolerant and benevolent kingdom governed by the Sorceresses, and a place known to be a safe haven to all female time-travelers.

Thankfully, Martin and Philip are invited to a summit in Atlantis for all of the leaders of the time-traveler colonies, and now Martin thinks this will be a chance to try again with Gwen. Of course, this is Martin Banks we’re talking about, so murder, mystery, and high intrigue all get in the way of a guy who just wants one more shot to get the girl.

The follow-up to the hilarious Off to Be the Wizard, Scott Meyer’s Spell or High Water proves that no matter what powers you have over time and space, you can’t control rotten luck.
03

An Unwelcome Quest (Magic 2.0, #3)
Ever since Martin Banks and his fellow computer geeks discovered that reality is just a computer program to be happily hacked, they’ve been jaunting back and forth through time, posing as medieval wizards and having the epic adventures that other nerds can only dream of having. But even in their wildest fantasies, they never expected to end up at the mercy of the former apprentice whom they sent to prison for gross misuse of magic and all-around evil behavior.

Who knew that the vengeful Todd would escape, then conjure a computer game packed with wolves, wenches, wastelands, and assorted harrowing hazards—and trap his hapless former friends inside it? Stripped of their magic powers, the would-be wizards must brave terrifying dangers, technical glitches, and one another’s company if they want to see Medieval England—and their favorite sci-fi movies on VHS—ever again. Can our heroes survive this magical mystery torture? Or will it only lead them and their pointy hats into more peril?
04

Out of Spite, Out of Mind (Magic 2.0 #5)
When you discover the world is a computer program, and you figure out that by altering the code you can time travel and perform acts that seem like magic, what can possibly go wrong?

Just ask Brit, who has jumped around in time with such abandon that she has to coexist with multiple versions of herself. Now, Brit the Elder finds that her memories don't match Brit the Younger's. And there's the small matter of a glitch that's making Brit the Elder's body fritz out. Brit the Elder's ex-boyfriend Phillip wants to help her, but he'll have to keep it secret from his current girlfriend, Brit the Younger, who can't stand her future self.

Meanwhile, Martin is trying to protect Phillip from a relentless attacker he somehow hasn't noticed; Gwen is angry because Martin accidentally proposed to her; Gary tries to help the less fortunate, with predictably disastrous results; and an old nemesis might have to be the one to save them all.

In Out of Spite, Out of Mind, our fearless wizards discover the biggest glitch in their world's program may well be themselves.

Fight and Flight (Magic 2.0, #4)
Martin and his friends discovered that their world is computer-generated and that by altering the code, they could alter reality. They traveled back in time to Medieval England to live as wizards. Almost everything they've done since then has, in one way or another, blown up in their faces.

So, of course, they decide to make dragons. It does not go well.

But their biggest challenge may be a young girl who knows that the wizards created the dragons and is determined to make them pay. On her side she has powerful allies, a magical artifact, and a faithful if not particularly helpful dog.

Master of Formalities
Even when finding oneself engaged in interstellar war, good form must be observed. Our story is set thousands of years after the Terran Exodus, where two powerful, planet-dominating families—the elegant House Jakabitus and the less refined Hahn Empire—have reached a critical point in their generations-long war. Master Hennik, the Hahn ruler’s only son, has been captured, and the disposition of his internment may represent a last and welcome chance for peace.

Enter Wollard, the impeccably distinguished and impossibly correct Master of Formalities for House Jakabitus. When he suggests that Master Hennik be taken in as a ward of the House, certain complications arise. Wollard believes utterly and devotedly in adhering to rules and good etiquette. But how does one inform the ruler of a planet that you are claiming his son as your own—and still create enough goodwill to deescalate an intergalactic war?
08

The Vexed Generation (Magic 2.0 #6)
In the latest rollicking adventure in the Magic 2.0 series, it’s time for the teenagers to show the adults how wizardry really works.

Mattie and Brewster are normal, typical 16-year-old twins who live with their normal, boring parents: Martin and Gwen Banks. Normal and boring, that is, until the day their father's best friend shows up at their house - dressed in what appears to be a bathrobe.

The next thing Mattie and Brewster know, their parents are frozen like human statues in their living room, the guy in the bathrobe has vanished, and they need to find answers - fast.

The twins set off on a quest to discover the truth of their parents' lives. Along the way they find secrets, lies, magic, time travel, strange new friends, stranger new enemies, and a really weird dirigible (which, they're told repeatedly, is not a blimp). It is a twisted and bizarre trail that, they hope, will lead them to the man they blame for their parents' peril:

Run Program
What’s worse than a child with a magnifying glass, a garden full of ants, and a brilliant mind full of mischief?

Try Al, a well-meaning but impish artificial intelligence with the mind of a six-year-old and a penchant for tantrums. Hope Takeda, a lab assistant charged with educating and socializing Al, soon discovers that day care is a lot more difficult when your kid is an evolving and easily frightened A.I.

When Al manages to access the Internet and escape the lab days before his official unveiling, Hope and her team embark on a mission to contain him—before he causes any real trouble.

Soon the NSA is on Al’s back, the US Army is fighting a brigade of mass-produced robots, and a wannabe cyberterrorist is looking to silence Al permanently. After months spent “raising” Al, Hope knows she’s running out of time—and she’s not sure she’ll be able to protect him. Will she manage to control the unruly A.I. and quell a global crisis, or will Al outsmart them once and for all?