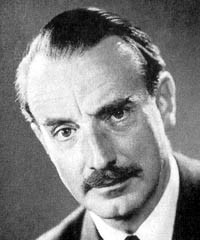 René Lodge Brabazon Raymond was born on 24th December 1906 in London, England, the son of Colonel Francis Raymond of the colonial Indian Army, a veterinary surgeon. His father intended his son to have a scientific career, was initially educated at King's School, Rochester, Kent. He left home at the age of 18 and became at different times a children's encyclopedia salesman, a salesman in a bookshop, and executive for a book wholesaler before turning to a writing career that produced more than 90 mystery books. His interests included photography (he was up to professional standard), reading and listening to classical music, being a particularly enthusiastic opera lover. Also as a form of relaxation between novels, he put together highly complicated and sophisticated Meccano models.

In 1932, Raymond married Sylvia Ray, who gave him a son. They were together until his death fifty three years later. Prohibition and the ensuing US Great Depression (1929–1939), had given rise to the Chicago gangster culture just prior to World War II. This, combined with her book trade experience, made him realise that there was a big demand for gangster stories. He wrote as R. Raymond, James Hadley Chase, James L. Docherty, Ambrose Grant and Raymond Marshall.

During World War II he served in the Royal Air Force, achieving the rank of Squadron Leader. Chase edited the RAF Journal with David Langdon and had several stories from it published after the war in the book Slipstream: A Royal Air Force Anthology.

Raymond moved to France in 1956 and then to Switzerland in 1969, living a secluded life in Corseaux-sur-Vevey, on Lake Geneva, from 1974. He eventually died there peacefully on 6 February 1985.

James Hadley Chase is the author of books: No Orchids for Miss Blandish (Blandish's Orchids and Dave Fenner #1), A Coffin from Hong Kong, The Vulture Is a Patient Bird, An Ace Up My Sleeve, Tiger by the Tail, Hit and Run, Like a Hole in the Head, Knock, Knock! Who's There?, Just a Matter of Time, I'll Bury My Dead

No Orchids for Miss Blandish (Blandish's Orchids and Dave Fenner #1)
Miss Blandish - innocent, exquisite, vulnerable heiress - is kidnapped by a gang of ruthless hoods who've never tried big-time crime. Foiled by their own vicious ineptitude and the greed of a superior mob, the kidnappers lose their million dollar prize. Blandish, terrified and broken, is now the captive of Ma' Grisson and her sadistic, sexually deviant son Slim.

When Dave Fenner was hired to solve the Blandish kidnapping, he knew the odds of finding the girl were against him - the cops were still looking for her three months after the ransom had been paid. And the kidnappers, Riley and his gang, had disappeared in to thin air. But what none of them knew was that Riley himself had been wiped out by a rival gang - and the heiress was now in the hands of Ma Grisson and her son Slim, a vicious killer who couldn't stay away from women...especially his beautiful new captive. By the time Fenner began to close in on them, some terrible things had happened to Miss Blandish...
02

A Coffin from Hong Kong
It was the easiest three grand Nelson Ryan had ever made - but suddenly he realized he was being played for a sucker. A telephone call, seemingly innocent enough, led him to the murder of a Chinese call-girl who'd talked too much. It also pitched him straight into the teeming, sordid night life of colourful Hong Kong. From now on, Ryan would stick at nothing to get the killer who'd crossed him up...
03

The Vulture Is a Patient Bird
Kahlenberg, millionaire and a compulsive collector of art treasures steals a famous poison ring, once owned by Caesar Borgia, from a rival collector.
Kahlenberg's museum is hidden in the Drakensberg range and can only be reached through the dangerous swamps and the steamy heat of the Basutoland jungle.

A Criminal, a professional Smuggler and a White Hunter together with a beautiful woman to act as their Trojan Horse are hired to recover the ring.
04

An Ace Up My Sleeve
Three very different people, all out for the same thing and determined to get it - that must mean high stakes. But for a wealthy middle-aged woman, an international lawyer and a young American, games of bluff and counter-bluff quickly become a deadly battle.
05

Tiger by the Tail
Kenway Holland, a respectable, married bank official, jeopardises his happiness and his future by one night of midsummer madness. The sudden temptation to kick over the traces while his wife is away lands Holland up to his ears in a vortex of political intrigue and murder. Set against a background of gangster politicians, blackmailers, gunmen and hard-boiled characters, the action of this explosive thriller takes place over a period of only thirty hours!

One night of midsummer madness... and Ken Holland, a respectable, married bank official, jeopardises his happiness and his future. The sudden temptation to kick over the traces while his wife is away lands Holland up to his ears in a vortex of political intrigue and murder. Set against a background of gangster politicians, blackmailers, gunmen and hard-boiled characters, the action of this explosive thriller takes place over a period of only thirty hours.
But what hours they are !
06

Hit and Run
Lucille Aitkin was the kind of woman who encouraged men to run around after her and most men were more than happy to do so - so why did she suddenly want to learn to drive rather than being chauffer-driven in style? And why was Chester Scott's Cadillac covered with bloodstains on the wrong side? And at the same time, why was patrol officer O'Brien run over on a deserted beach road when he should have been on duty on the highway? It seems that somebody knows how these events are connected, and whoever it is seems intent on blackmail.
07

Just a Matter of Time
10

I'll Bury My Dead
"This is a personal matter. Someone killed my brother. I don't like that. If the police can't take care of it, then I'll bury my own dead."

Nick English meant every word, but his efforts to find his brother's killer started a chain reaction of murder and violence that would nearly end his own life.

Here is a story of organized blackmail punctuated by sudden and gruesome murder. Written with the punch and speed of a rivet gun, I'll Bury My Dead confirms James Hadley Chase's reputation as a leading writer of all-action, edge-of-your-seat thrillers that demand to be read in a single sitting.