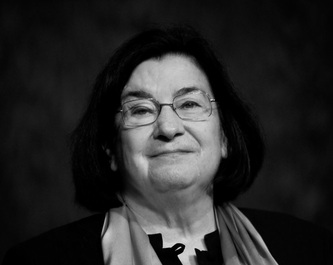 Novelist, short-story writer, essayist, critic, journalist, and film dramatist Christa Wolf was a citizen of East Germany and a committed socialist, and managed to keep a critical distance from the communist regime. Her best-known novels included “Der geteilte Himmel” (“Divided Heaven,” 1963), addressing the divisions of Germany, and “Kassandra” (“Cassandra,” 1983), which depicted the Trojan War.

She won awards in East Germany and West Germany for her work, including the Thomas Mann Prize in 2010. The jury praised her life’s work for “critically questioning the hopes and errors of her time, and portraying them with deep moral seriousness and narrative power.”

Christa Ihlenfeld was born March 18, 1929, in Landsberg an der Warthe, a part of Germany that is now in Poland. She moved to East Germany in 1945 and joined the Socialist Unity Party in 1949. She studied German literature in Jena and Leipzig and became a publisher and editor.

In 1951, she married Gerhard Wolf, an essayist. They had two children. Christa Wolf died in December 2011.

Christa Wolf is the author of books: Cassandra: A Novel and Four Essays, Medea, Kassandra, Der geteilte Himmel, The Quest for Christa T., Patterns of Childhood, Was bleibt, Accident: A Day's News, Ein Tag im Jahr, No Place on Earth

Cassandra: A Novel and Four Essays
In this volume, the distinguished East German writer Christa Wolf retells the story of the fall of Troy, but from the point of view of the woman whose visionary powers earned her contempt and scorn. Written as a result of the author's Greek travels and studies, Cassandra speaks to us in a pressing monologue whose inner focal points are patriarchy and war. In the four accompanying pieces, which take the form of travel reports, journal entries, and a letter, Wolf describes the novel's genesis. Incisive and intelligent, the entire volume represents an urgent call to examine the past in order to insure a future.
02

Medea
Medea is among the most notorious women in Greek tragedy - a woman who sacrifices her own children to her jealous rage. In this novel, Wolf explodes the myth, offering modern readers a portrayal of a fiercely independent woman ensnared in a political battle.
03

The Quest for Christa T.
When The Quest for Christa T. was first published in East Germany in 1968, there was an immediate storm: bookshops in East Berlin were given instructions to sell it only to well-known customers professionally involved in literary matters; at the annual meeting of East German Writers Conference, Mrs Wolf's new book was condemmed. Yet the novel has nothing explicitly to do with politics.

Praise for The Quest for Christa T.

On the surface we merely have the story of a sensitive woman as recalled by her friend. On this level Christa T. was a good citizen who did as she was told and lived a seemingly unexceptional life. But between the lines lies the real story of Christa T. -- the story of an individual crushed by the pressures of uniformity. If you bear in mind it is the first novel of any consequence to emerge from Ulbricht's East Germany, then it becomes something of a literary landmark. - John Barkman, New York Post

The contours of silence and the outline of things articulately left unsaid loom large in the muted brilliance of this novel. - Ernst Pawek, The New York Review of Books

It is a courageous book that breaks taboos and, as we have come to expect from Christa Wolf, it is infused with an integrity and a deep moral concern. . . - The (London) Times Literary Supplement
06

Patterns of Childhood
This novel is a testament of what seemed at the time a fairly ordinary childhood, in the bosom of a normal Nazi family in Landsberg.

Returning to her native town in East Germany forty years later, accompanied by her inquisitive and sometimes demanding daughter, Christa Wolf attempts to recapture her past and to clarify memories of growing up in Nazi Germany
07

Accident: A Day's News
An East German writer, awaiting a call from the hospital where her brother is undergoing brain surgery, instead receives news of a massive nuclear accident at Chernobyl, one thousand miles away. In the space of a single day, in a potent, lyrical stream of thought, the narrator confronts both mortality and life and above all, the import of each moment lived-open, as Wolf reveals, to infinite analysis.
09

No Place on Earth
"Historical, hypothetical, but marvelously intense: a fascinating short novel by one of Europe's most consistently haunting novelist." - Kirkus Reviews