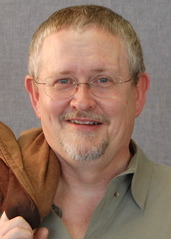 Orson Scott Card is the author of the novels Ender's Game, Ender's Shadow, and Speaker for the Dead, which are widely read by adults and younger readers, and are increasingly used in schools.

Card was born in Washington and grew up in California, Arizona, and Utah. He served a mission for the LDS Church in Brazil in the early 1970s. Besides his writing, he teaches occasional classes and workshops and directs plays. He recently began a long-term position as a professor of writing and literature at Southern Virginia University.

For further details, see the author's Wikipedia page.
For an ordered list of the author's works, see Wikipedia's List of works by Orson Scott Card.

Ender's Game (Ender's Saga, #1)
Andrew "Ender" Wiggin thinks he is playing computer simulated war games; he is, in fact, engaged in something far more desperate. The result of genetic experimentation, Ender may be the military genius Earth desperately needs in a war against an alien enemy seeking to destroy all human life. The only way to find out is to throw Ender into ever harsher training, to chip away and find the diamond inside, or destroy him utterly. Ender Wiggin is six years old when it begins. He will grow up fast.

But Ender is not the only result of the experiment. The war with the Buggers has been raging for a hundred years, and the quest for the perfect general has been underway almost as long. Ender's two older siblings, Peter and Valentine, are every bit as unusual as he is, but in very different ways. While Peter was too uncontrollably violent, Valentine very nearly lacks the capability for violence altogether. Neither was found suitable for the military's purpose. But they are driven by their jealousy of Ender, and by their inbred drive for power. Peter seeks to control the political process, to become a ruler. Valentine's abilities turn more toward the subtle control of the beliefs of commoner and elite alike, through powerfully convincing essays. Hiding their youth and identities behind the anonymity of the computer networks, these two begin working together to shape the destiny of Earth-an Earth that has no future at all if their brother Ender fails.

Speaker for the Dead (Ender's Saga, #2)
Now available in mass market, the revised, definitive edition of the Hugo and Nebula Award-winning classic. In this second book in the saga set 3,000 years after the terrible war, Ender Wiggin is reviled by history as the Xenocide--the destroyer of the alien Buggers. Now, Ender tells the true story of the war and seeks to stop history from repeating itself. ...

In the aftermath of his terrible war, Ender Wiggin disappeared, and a powerful voice arose: The Speaker for the Dead, who told the true story of the Bugger War.

Now, long years later, a second alien race has been discovered, but again the aliens' ways are strange and frightening...again, humans die. And it is only the Speaker for the Dead, who is also Ender Wiggin the Xenocide, who has the courage to confront the mystery...and the truth.

Growing up is never easy. But try living on the mean streets as a child begging for food and fighting like a dog with ruthless gangs of starving kids who wouldn't hesitate to pound your skull into pulp for a scrap of apple. If Bean has learned anything on the streets, it's how to survive. And not with fists. He is way too small for that. But with brains.

Bean is a genius with a magician's ability to zero in on his enemy and exploit his weakness.

What better quality for a future general to lead the Earth in a final climactic battle against a hostile alien race, known as Buggers. At Battleschool Bean meets and befriends another future commander - Ender Wiggins - perhaps his only true rival.

Only one problem: for Bean and Ender, the future is now.

Ender's Shadow is the book that launched The Shadow Series, and the parallel novel to Orson Scott Card's science fiction classic, Ender's Game.
04

Xenocide (Ender's Saga, #3)
The war for survival of the planet Lusitania will be fought in the hearts of a child named Gloriously Bright.

On Lusitania, Ender found a world where humans and pequininos and the Hive Queen could all live together; where three very different intelligent species could find common ground at last. Or so he thought.

Lusitania also harbors the descolada, a virus that kills all humans it infects, but which the pequininos require in order to become adults. The Starways Congress so fears the effects of the descolada, should it escape from Lusitania, that they have ordered the destruction of the entire planet, and all who live there. The Fleet is on its way, and a second xenocide seems inevitable.
05

Children of the Mind (Ender's Saga, #4)
Children of the Mind (1996) is the fourth novel of Orson Scott Card's popular Ender's Game series of science fiction novels that focus on the character Ender Wiggin. This book was originally the second half of Xenocide, before it was split into two novels.

At the start of Children of the Mind, Jane, the evolved computer intelligence, is using her newly discovered abilities to take the races of buggers, humans and pequeninos outside the universe and back instantaneously. She uses these powers to move them to distant habitable planets for colonization. She is losing her memory and concentration as the vast computer network connected to the ansible is being shut down. If she is to survive, she must find a way to transfer her aiúa (or soul) to a human body.
06

Shadow of the Hegemon (The Shadow Series, #2)
The War is over, won by Ender Wiggin and his team of brilliant child-warriors. The enemy is destroyed, the human race is saved. Ender himself refuses to return to the planet, but his crew has gone home to their families, scattered across the globe. The battle school is no more.

But with the external threat gone, the Earth has become a battlefield once more. The children of the Battle School are more than heroes; they are potential weapons that can bring power to the countries that control them. One by one, all of Ender's Dragon Army are kidnapped. Only Bean escapes; and he turns for help to Ender's brother Peter.

Peter Wiggin, Ender's older brother, has already been manipulating the politics of Earth from behind the scenes. With Bean's help, he will eventually rule the world.
07

Earth and its society have been changed irrevocably in the aftermath of Ender Wiggin's victory over the Formics. The unity forced upon the warring nations by an alien enemy has shattered. Nations are rising again, seeking territory and influence, and most of all, seeking to control the skills and loyalty of the children from the Battle School.

But one person has a better idea. Peter Wiggin, Ender's older, more ruthless, brother, sees that any hope for the future of Earth lies in restoring a sense of unity and purpose. And he has an irresistible call on the loyalty of Earth's young warriors. With Bean at his side, the two will reshape our future.

Here is the continuing story of Bean and Petra, and the rest of Ender's Dragon Army, as they take their places in the new government of Earth.
08

Shadow of the Giant (Ender's Shadow, #4)
Bean's past was a battle just to survive. He first appeared on the streets of Rotterdam, a tiny child with a mind leagues beyond anyone else. He knew he could not survive through strength; he used his tactical genius to gain acceptance into a children's gang, and then to help make that gang a template for success for all the others. He civilized them, and lived to grow older. Then he was discovered by the recruiters for the Battle School.
09

The mining ship El Cavador is far out from Earth, in the deeps of the Kuiper Belt, beyond Pluto. Other mining ships, and the families that live on them, are few and far between this far out. So when El Cavador's telescopes pick up a fast-moving object coming in-system, it's hard to know what to make of it. It's massive and moving at a significant fraction of the speed of light.

El Cavador has other problems. Their systems are old and failing. The family is getting too big for the ship. There are claim-jumping corporate ships bringing Asteroid Belt tactics to the Kuiper Belt. Worrying about a distant object that might or might not be an alien ship seems not important.

They're wrong. It's the most important thing that has happened to the human race in a million years. The first Formic War is about to begin.

Ender in Exile (Ender's Saga, #1.2)
At first, Ender believed that they would bring him back to Earth as soon as things quieted down. But things were quiet now, had been quiet for a year, and it was plain to him now that they would not bring him back at all, that he was much more useful as a name and a story than he would ever be as an inconvenient flesh-and-blood person.

At the close of Ender's Game, Andrew Wiggin--called Ender by everyone--knows that he cannot live on Earth. He has become far more than just a boy who won a game: He is the Savior of Earth, a hero, a military genius whose allegiance is sought by every nation of the newly shattered Earth Hegemony.

He is offered the choice of living under the Hegemon's control, a pawn in his brother Peter's political games. Or he can join the colony ships and go out to settle one of the new worlds won in the war.

The story of those years on the colony worlds has never been told...until now.

The voyage was long. By the end of it, Val had finished the first volume of her history of the bugger wars and transmitted it by ansible, under Demosthenes' name, back to Earth, and Ender had won something better than the adulation of the passengers. They knew him now, and he had won their love and their respect.

Ender was twelve when he chose to leave his home world and begin the long relativistic journey out to the colonies. With him went his sister, Valentine, and the core of the artificial intelligence that would become Jane. He wrote The Hive Queen and The Hegemon, and his sister wrote The Speaker for the Dead.

He served as governor of his first colony world, but now Ender is on the move, looking for a planet where the hive queens might be reestablished.

What he finds in the Ganges colony is more than he bargained for--a resentful governor who caused a devastating war on Earth and a brilliant young colonist who is out to destroy him, starting with his reputation and ending, perhaps, with his life.