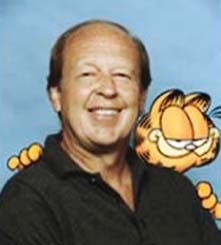 James Robert "Jim" Davis is an American cartoonist who created the popular comic strip Garfield. Other comics that he has worked on are Tumbleweeds, Gnorm Gnat, Slapstick, and a strip about Mr. Potato Head.

Jim Davis was born in Fairmount, Indiana, near Marion, where he grew up on a small farm with his father James William Davis, mother Anna Catherine (Carter) Davis, brother Dave, and 25 cats. Davis' childhood on a farm parallels the life of his cartoon character Garfield's owner, Jon Arbuckle, who was also raised on a farm with his parents and a brother, Doc Boy. Jon, too, is a cartoonist, and also celebrates his birthday on July 28. Davis attended Ball State University. While attending Ball State, he became a member of the Theta Xi fraternity. He earned the dubious honor of earning one of the lowest cumulative grade point averages in the history of the university, an honor incidentally shared with Late Show host David Letterman.

Davis as of 2007 resides in Muncie, Indiana, where he and his staff produce Garfield under his company, Paws, Inc., begun in 1981. He was married to Carolyn, a singer and elementary teacher whom he met while both were attending college, and has a son named James with her. However, the couple divorced, and Davis since 2000 has been married to Jill, Paws' senior vice president of licensing, who has worked there approximately 25 years.

Ironically, Davis did not own cats when he started Garfield because of Carolyn's allergies, but they owned a Labrador retriever named Molly. With Jill, the family has expanded to include children Ashley and Chris; three grandchildren, Chloe, Carly and Cody; cats, Spunky and Nermal; and a dog, Pooky.

Garfield at Large: His First Book (Garfield, #1)
Like every great lasagna, Garfield was born in the kitchen of an Italian restaurant on a winter's night in 1978, while outside snow fell like grated Parmesan cheese. He weighed five pounds, six ounces at birth—that's big for a kitten!—and right from the start showed a passion for Italian food. The restaurant owner, forced to choose between Garfield and closing his doors for lack of pasta, sold Garfield to a pet store. Garfield thought he was a goner until Jon Arbuckle walked in the door.

Garfield Gains Weight (Garfield, #2)
He sleeps late and wakes up grouchy. He hates joggers, beats up dogs, and shreds his owner. He's cynical, witty, urbane, and sometimes downright mean. But best of all, he's back, better than ever, to delight cat-lovers and cat-haters alike.
03

Garfield Weighs In (Garfield, #4)
The fourth book about America's sassiest, grouchiest, funniest, and chubbiest cat. Garfield ranks first in his weight class, celebrates his second birthday, falls in love, and loses a stripe!
04

Garfield Takes the Cake (Garfield, #5)
Garfield is a fast-talking, late-sleeping, cynical, lovable cat. He hassles Odie, Jon, and Nermal and enchants kids of all ages. Riding the crest of four big best-sellers, he's back--better, fatter, and funnier than ever before!
06

Garfield Takes up Space (Garfield, #20)
Garfield knows what matters in life --- whether he's stealing Jon's dinner, performing for his favorite audience, or simply pondering the vastness of space. And he must be doing sometjing right, because this is his 20th book and he's still going strong. Live it up, Garfield, and take your millions of fans along for the ride!
08

Garfield Chews the Fat (Garfield, #17)
Who's back in the limelight again? It's Garfield! Leading the world in most naps snoozed per year, perfecting the art of eating without coming up for air, and discovering that dessert is the most important meal of the day. Garfield's back, and we've got him right where we want him!
09

Garfield Hangs Out (Garfield, #19)
A collection of the irrepressible feline's daily comic strips relates the adventures of Jon, Odie, and the rest of the gang.
10

Garfield Out to Lunch (Garfield, #12)
A collection of Garfield comic strips chronicling the misadventures of a naughty, overweight cat.