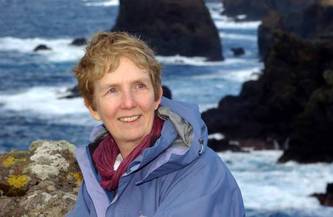 Ann is the author of the books behind ITV's VERA, now in it's third series, and the BBC's SHETLAND, which will be aired in December 2012. Ann's DI Vera Stanhope series of books is set in Northumberland and features the well loved detective along with her partner Joe Ashworth. Ann's Shetland series bring us DI Jimmy Perez, investigating in the mysterious, dark, and beautiful Shetland Islands...


Ann grew up in the country, first in Herefordshire, then in North Devon. Her father was a village school teacher. After dropping out of university she took a number of temporary jobs - child care officer, women's refuge leader, bird observatory cook, auxiliary coastguard - before going back to college and training to be a probation officer.

While she was cooking in the Bird Observatory on Fair Isle, she met her husband Tim, a visiting ornithologist. She was attracted less by the ornithology than the bottle of malt whisky she saw in his rucksack when she showed him his room. Soon after they married, Tim was appointed as warden of Hilbre, a tiny tidal island nature reserve in the Dee Estuary. They were the only residents, there was no mains electricity or water and access to the mainland was at low tide across the shore. If a person's not heavily into birds - and Ann isn't - there's not much to do on Hilbre and that was when she started writing. Her first series of crime novels features the elderly naturalist, George Palmer-Jones. A couple of these books are seriously dreadful.

In 1987 Tim, Ann and their two daughters moved to Northumberland and the north east provides the inspiration for many of her subsequent titles. The girls have both taken up with Geordie lads. In the autumn of 2006, Ann and Tim finally achieved their ambition of moving back to the North East.

For the National Year of Reading, Ann was made reader-in-residence for three library authorities. It came as a revelation that it was possible to get paid for talking to readers about books! She went on to set up reading groups in prisons as part of the Inside Books project, became Cheltenham Literature Festival's first reader-in-residence and still enjoys working with libraries.
Ann Cleeves on stage at the Duncan Lawrie Dagger awards ceremony

Ann's short film for Border TV, Catching Birds, won a Royal Television Society Award. She has twice been short listed for a CWA Dagger Award - once for her short story The Plater, and the following year for the Dagger in the Library award.

In 2006 Ann Cleeves was the first winner of the prestigious Duncan Lawrie Dagger Award of the Crime Writers' Association for Raven Black, the first volume of her Shetland Quartet. The Duncan Lawrie Dagger replaces the CWA's Gold Dagger award, and the winner receives £20,000, making it the world's largest award for crime fiction.

Ann's success was announced at the 2006 Dagger Awards ceremony at the Waldorf Hilton, in London's Aldwych, on Thursday 29 June 2006. She said: "I have never won anything before in my life, so it was a complete shock - but lovely of course.. The evening was relatively relaxing because I'd lost my voice and knew that even if the unexpected happened there was physically no way I could utter a word. So I wouldn't have to give a speech. My editor was deputed to do it!"

Ann's books have been translated into sixteen languages. She's a bestseller in Scandinavia and Germany. Her novels sell widely and to critical acclaim in the United States. Raven Black was shortlisted for the Martin Beck award for best translated crime novel in Sweden in 200

Raven Black begins on New Year’s Eve with a lonely outcast named Magnus Tait, who stays home waiting for visitors who never come. But the next morning the body of a murdered teenage girl is discovered nearby, and suspicion falls on Magnus. Inspector Jimmy Perez enters an investigative maze that leads deeper into the past of the Shetland Islands than anyone wants to go.

White Nights (Shetland Island, #2)
The electrifying follow up to the award-winning Raven Black

It’s midsummer in the Shetland Islands, the time of the white nights, when birds sing at midnight and the sun never sets. Artist Bella Sinclair throws an elaborate party to launch an exhibition of her work at The Herring House, a gallery on the beach.

The party ends in farce when one the guests, a mysterious Englishman, bursts into tears and claims not to know who he is or where he’s come from. The following day the Englishman is found hanging from a rafter, and Detective Jimmy Perez is convinced that the man has been murdered. He is reinforced in this belief when Roddy, Bella’s musician nephew, is murdered, too.

But the detective’s relationship with Fran Hunter may have clouded his judgment, for this is a crazy time of the year when night blurs into day and nothing is quite as it seems.

A stunning second installment in the acclaimed Shetland Island Quartet, White Nights is sure to garner American raves for international sensation Ann Cleeves.
03

Red Bones (Shetland Island, #3)
An island shrouded in mist and a community with secrets buried in the past . . .

When a young archaeologist studying on a site at Whalsay discovers a set of human remains, the island settlers are intrigued. Is it an ancient find - or a more contemporary mystery?

Then an elderly woman is shot in a tragic accident in the middle of the night. Shetland detective Jimmy Perez is called in by her grandson - his own colleague, Sandy Wilson.

The sparse landscape and the emptiness of the sea have bred a fierce and secretive people. Mima Wilson was a recluse. She had her land, her pride and her family. As Jimmy looks to the islanders for answers, he finds instead two feuding families whose envy, greed and bitterness have lasted generations.

Surrounded by people he doesn't know and in unfamiliar territory, Jimmy finds himself out of his depth. Then there's another death and, as the spring weather shrouds the island in claustrophobic mists, Jimmy must dig up old secrets to stop a new killer from striking again . . .
04

Blue Lightning (Shetland Island, #4)
Shetland Detective Jimmy Perez knows it will be a difficult homecoming when he returns to the Fair Isles to introduce his fiancee, Fran, to his parents. When a woman's body is discovered at the renowned Fair Isles bird observatory, Jimmy must investigate the old-fashioned way."
05

Cold Earth (Shetland Island, #7)
In the dark days of a Shetland winter, torrential rain triggers a landslide that crosses the main Lerwick-Sumburgh road and sweeps down to the sea.

At the burial of his old friend Magnus Tait, Jimmy Perez watches the flood of mud and peaty water smash through a croft house in its path. Everyone thinks the croft is uninhabited, but in the wreckage he finds the body of a dark-haired woman wearing a red silk dress. In his mind, she shares his Mediterranean ancestry and soon he becomes obsessed with tracing her identity.

Then it emerges that she was already dead before the landslide hit the house. Perez knows he must find out who she was, and how she died.
06

Dead Water (Shetland Island, #5)
Ann Cleeves returns to her critically acclaimed Shetland Island series with this stunning mystery featuring Inspector Jimmy Perez, who readers will remember from Raven Black, White Nights, Red Bones, and Blue Lightning. When the body of a journalist is found, Detective Inspector Willow Reeves is drafted from outside to head up the investigation. Inspector Jimmy Perez has been out of the loop, but his local knowledge is needed in this case, and he decides to help Willow. The dead journalist had left the islands years before to pursue his writing career. In his wake, he left a scandal involving a young girl. When Willow and Jimmy dig deeper, they realize that the journalist was chasing a story that many Shetlanders didn't want to come to the surface. In Dead Water, a triumphant continuation to her Shetland series, Ann Cleeves cements her place as one of Britain's most successful crime writers.
07

The Crow Trap (Vera Stanhope, #1)
Vera Stanhope's first appearance was in The Crow Trap, published in 1999 and now available in a new edition; it forms the third episode of the TV series Vera, adapted by Stephen Brady.

At the isolated Baikie's Cottage on the North Pennines, three very different women come together to complete an environmental survey. Three women who, in some way or another, know the meaning of betrayal...

For team leader Rachael Lambert the project is the perfect opportunity to rebuild her confidence after a double-betrayal by her lover and boss, Peter Kemp. Botanist Anne Preece, on the other hand, sees it as a chance to indulge in a little deception of her own. And then there is Grace Fulwell, a strange, uncommunicative young woman with plenty of her own secrets to hide...

When Rachael arrives at the cottage, however, she is horrified to discover the body of her friend Bella Furness. Bella, it appears, has committed suicide - a verdict Rachael finds impossible to accept.

Only when the next death occurs does a fourth woman enter the picture - the unconventional Detective Inspector Vera Stanhope, who must piece together the truth from these women's tangled lives...
08

Thin Air (Shetland Island, #6)
A group of old university friends leave the bright lights of London and travel to Unst, Shetland's most northerly island, to celebrate the marriage of one of their friends to a Shetlander. But late on the night of the wedding party, one of them, Eleanor, disappears - apparently into thin air. It's mid-summer, a time of light nights and unexpected mists. The following day, Eleanor's friend Polly receives an email. It reads like a suicide note, saying she'll never be found alive. And then Eleanor's body is discovered, lying in a small loch close to the cliff edge.

Detectives Jimmy Perez and Willow Reeves are dispatched to Unst to investigate. Before she went missing, Eleanor claimed to have seen the ghost of a local child who drowned in the 1920s. Her interest in the legend of the ghost had seemed unhealthy - obsessive, even - to her friends: an indication of a troubled mind. But Jimmy and Willow are convinced that there is more to Eleanor's death than there first appears.

Is there a secret that lies behind the myth? One so shocking that someone would kill - many years later - to protect?
09

The Long Call (Two Rivers, #1)
For the first time in 20 years, Ann Cleeves --international bestselling and award-winning author of the Vera and Shetland series, both of which are hit TV shows-- embarks on a gripping new series.
In North Devon, where two rivers converge and run into the sea, Detective Matthew Venn stands outside the church as his father’s funeral takes place. Once loved and cherished, the day Matthew left the strict evangelical community he grew up in, he lost his family too.

Now, as he turns and walks away again, he receives a call from one of his team. A body has been found on the beach nearby: a man with a tattoo of an albatross on his neck, stabbed to death.

The case calls Matthew back into the community he thought he had left behind, as deadly secrets hidden at its heart are revealed, and his past and present collide.

An astonishing new novel told with compassion and searing insight, The Long Call will captivate fans of Vera and Shetland, as well as new readers.
10

Wild Fire (Shetland Island, #8)
When the Flemings--designer Helena and architect Daniel--move into a remote community in the north of Shetland, they think it's a fresh start for themselves and their children.

But their arrival triggers resentment, and Helena begins to receive small drawings of a gallows and a hanged man. Gossip spreads like wildfire.