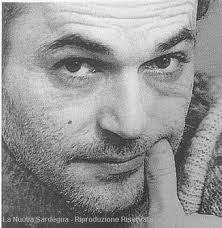 Born in Capoterra, southern Sardinia, he moved to Cagliari where, as a journalist, he worked for some of the most important Sardinian newspapers. He also became a member of the PCI (Italian Communist Party), but later left the party, being disullusioned with politics. In 1986, he left Sardinia and travelled across Europe, but in the last part of his life he settled in Turin where he wrote his most important novels, including Il figlio di Bakunìn (Bakunin's Son), Passavamo sulla terra leggeri and Il quinto passo è l'addio. In 1995, he died in Carloforte while swimming in the sea during a holiday back in Sardinia.

All of Atzeni's works are set in Sardinia and were written in Italian. He experimented different techniques and styles across his novels. Most notably, he used a very original language that fused elegant literary Italian and the "patter" used by the working-class in Cagliari and Sardinia, where many words and sayings are borrowed from the Sardinian language. In this way Atzeni reproduces the immediacy of the spoken language in his novels. In some of his novels (e.g. Il quinto passo è l'addio and Bellas mariposas) he also used techniques akin to the "magic realism" style of many Southern American authors, where fantastic elements appear in the realistic setting.

Sergio Atzeni is considered, with Giulio Angioni and Salvatore Mannuzzu, one of the initiators of the so-called "Sardinian Literary Spring", the Sardinian narrative of today in the European arena, which followed the work of individual prominent figures such as Grazia Deledda, Giuseppe Dessì, Gavino Ledda, Salvatore Satta. Some of his novels have been translated in French, but only one, Il figlio di Bakunìn (Bakunin's Son), has been translated in English.