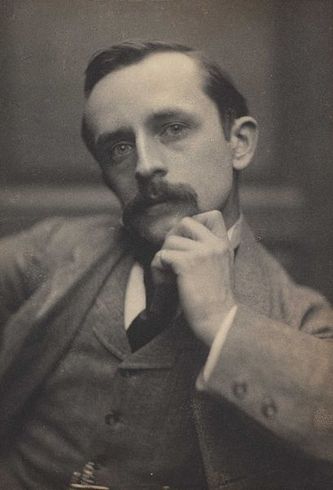 The son of a weaver, Barrie studied at the University of Edinburgh. He took up journalism, worked for a Nottingham newspaper, and contributed to various London journals before moving to London in 1885. His early works, Auld Licht Idylls (1889) and A Window in Thrums (1889), contain fictional sketches of Scottish life and are commonly seen as representative of the Kailyard school. The publication of The Little Minister (1891) established his reputation as a novelist. During the next 10 years Barrie continued writing novels, but gradually his interest turned toward the theatre.

In London he met the Llewelyn Davies boys who inspired him in writing about a baby boy who has magical adventures in Kensington Gardens (included in The Little White Bird), then to write Peter Pan, or The Boy Who Wouldn't Grow Up, a "fairy play" about this ageless boy and an ordinary girl named Wendy who have adventures in the fantasy setting of Neverland. This play quickly overshadowed his previous work and although he continued to write successfully, it became his best-known work, credited with popularising the name Wendy, which was very uncommon previously.

Barrie unofficially adopted the Davies boys following the deaths of their parents. Before his death, he gave the rights to the Peter Pan works to Great Ormond Street Hospital, which continues to benefit from them.

Peter Pan
Peter Pan by J. M. Barrie Peter Pan, the mischievous boy who refuses to grow up, lands in the Darling's proper middle-class home to look for his shadow. He befriends Wendy, John and Michael and teaches them to fly (with a little help from fairy dust). He and Tinker Bell whisk them off to Never-land where they encounter the Red Indians, the Little Lost Boys, pirates and the dastardly Captain Hook.
02

Peter Pan in Kensington Gardens
Peter Pan in Kensington Gardens by J.M. Barrie. Peter Pan, the boy who refused to grow up, is one of the immortals of children's literature. J.M. Barrie first created Peter Pan as a baby, living in secret with the birds and fairies in the middle of London, but as the children for whom he invented the stories grew older, so too did Peter, reappearing in Neverland, where he was aided in his epic battles with Red Indians and pirates by the motherly and resourceful Wendy Darling. With their contrary lures of home and escape, childhood and maturity, safety and high adventure, these unforgettable tales are equally popular with children and adults.
03

This enchanting adaptation of the enduring story of the boy who never grows up, produced in association with Great Ormond Street Hospital, stars Rupert Everett as the villainous Captain Hook and Adeel Akhtar as his right-hand man Smee. Beloved by both children and adults alike, the entire family will be transported to a world made of faith, trust, and pixie dust.

This Audible Original Drama of Peter Pan takes listeners on a magical adventure with Peter, Wendy, Michael and John as they arrive in Neverland and take on Captain Hook with the help of Tiger Lilly and Tinker Bell.

The story begins at home in London during The Blitz and Mary Darling is planning to evacuate her children to the countryside. However, her plans take an unexpected turn when a familiar face from her childhood returns...the one and only Peter Pan, the mysterious boy from Kensington Gardens. Intrigued by their mother’s friend, Wendy, Michael and John seek Peter Pan out, resulting in them being whisked off to Neverland and setting up home with Peter, Tinker Bell and The Lost Boys.

As Peter and his gang come up against the wickedly evil Captain Hook their friendships and relationships are put to the test - can Wendy be honest with Peter about how she really feels, and will Michael and John return home without their sister?

To mark the release of this drama, Audible has donated to Great Ormond Street Hospital (https://www.gosh.org), to whom J. M. Barrie unexpectedly and generously gifted his copyright of Peter Pan.

Peter Pan: The Complete Adventures
Follow the Second Star to the Right!

Included in Peter Pan: The Complete Adventures are:

• All three Peter Pan books written by J.M. Barrie.
• Both Peter Pan and Peter Pan in Kensington Gardens are illustrated with the classic artwork by F.D. Bedford and Arthur Rackham.
• Links to free, full-length audio recordings of the Peter Pan books in this collection, as well as other childhood favorites.
• An individual, active Table of Contents for each book accessible from the Kindle "go to" feature.
• Perfect formatting in rich text compatible with Kindle's Text-to-Speech features.
• A low, can't-say-no price!

A Little Bit of Pixie Dust

Also included are special features for any Peter Pan enthusiast, including:

• A comprehensive list of the many film, television, and media adaptations of the Boy Who Would Not Grow Up.
• Links to free, full-length audio recordings of the books included in this collection, as well as other childhood favorites.
06

The Little White Bird
The Little White Bird is a series of short episodes with tones ranging from fantasy and whimsy to social comedy with dark aggressive undertonesm. It accounts the narrator's day to day activities in London of its day, and fanciful tales set in Kensington Gardens and elsewhere. This book also includes the very first appearance of Peter Pan.

Peter Pan and Other Plays
For some 20 years at the beginning of the century J M Barrie enjoyed enormous commercial success with a wide variety of plays, but he is best known for Peter Pan. It retains its popularity today, both in the original and in adaptations. Barrie returned to the Peter Pan story a few years later with When Wendy Grew Up when the two are reunited later in Wendy's life.

As well as being the author of the greatest of all children's plays Barrie also wrote sophisticated social comedy and political satire, much of it now newly topical. The Admirable Crichton and What Every Woman Knows are shrewd and entertaining contributions to the politics of class and gender, while Mary Rose is one of the best ghost stories written for the stage.
08

The Admirable Crichton
The story of the play concerns an aristocratic English family who revert to the state of Nature when shipwrecked on a desert island. While there, they are willing slaves to their former butler, but on return to civilization, the positions are shifted.
09

Peter Pan: or The Boy Who Would Not Grow Up: A Fantasy in Five Acts
This is the beloved story of Peter, Wendy, Michael, John, Capt. Hook, Smee, the lost boys, pirates and the indians, and, of course, Tinker Bell, in their adventures in Never Land. However, for the first time, the play is here restored to Barrie's original intentions. In the words of John Caird: "A brief explanation of some of the decisions we took in revising the text may be useful to anyone considering their own production of this version We were fascinated to discover that there was no one single document called PETER PAN. What we found was a tantalizing number of different versions, all of them containing some very agreeable surprises We have made some significant alterations, the greatest of which is the introduction of a new character, the Storyteller, who is in fact the author himself. To a reader of the play, one of its most enjoyable ingredients is Barrie's unmistakable authorial tone. He tells the story of Peter Pan partly through dialogue and partly by means of his inimitable stage directions. In a whimsical, ambiguous and ironical manner he speaks here as clearly to adults as he does to children. Moreover, many of the play's complicated conceits are only comprehensible if Barrie's commentary can be heard in parallel with the voices of the characters. This device also allows us to prepare our audience with some essential background history of the Darling family in a brief prologue, and to extend the narrative at the end of the play to include Barrie's heartbreaking and heartwarming conclusion to Peter and Wendy's story."