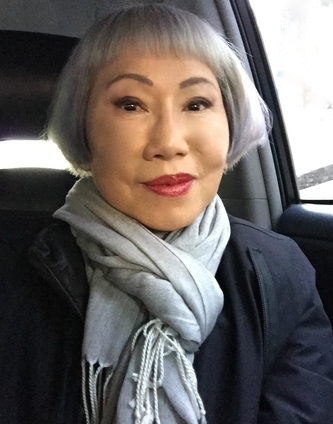 Amy Tan (Chinese: 譚恩美; pinyin: Tán Ēnměi; born February 19, 1952) is an American writer whose works explore mother-daughter relationships and what it means to grow up as a first generation Asian American. In 1993, Tan's adaptation of her most popular fiction work, The Joy Luck Club, became a commercially successful film.

She has written several other books, including The Kitchen God's Wife, The Hundred Secret Senses, and The Bonesetter's Daughter, and a collection of non-fiction essays entitled The Opposite of Fate: A Book of Musings. Her most recent book, Saving Fish From Drowning, explores the tribulations experienced by a group of people who disappear while on an art expedition into the jungles of Burma. In addition, Tan has written two children's books: The Moon Lady (1992) and Sagwa, The Chinese Siamese Cat (1994), which was turned into an animated series airing on PBS. She has also appeared on PBS in a short spot on encouraging children to write.

Currently, she is the literary editor for West, Los Angeles Times' Sunday magazine.

Amy Tan is the author of books: The Joy Luck Club, The Bonesetter's Daughter, The Kitchen God's Wife, The Hundred Secret Senses, The Valley of Amazement, Saving Fish from Drowning, The Opposite of Fate: Memories of a Writing Life, Rules for Virgins, The Moon Lady, Where the Past Begins: A Writer's Memoir

The Joy Luck Club
Four mothers, four daughters, four families, whose histories shift with the four winds depending on who's telling the stories. In 1949, four Chinese women, recent immigrants to San Francisco, meet weekly to play mahjong and tell stories of what they left behind in China. United in loss and new hope for their daughters' futures, they call themselves the Joy Luck Club. Their daughters, who have never heard these stories, think their mothers' advice is irrelevant to their modern American lives – until their own inner crises reveal how much they've unknowingly inherited of their mothers' pasts.

With wit and sensitivity, Amy Tan examines the sometimes painful, often tender, and always deep connection between mothers and daughters. As each woman reveals her secrets, trying to unravel the truth about her life, the strings become more tangled, more entwined. Mothers boast or despair over daughters, and daughters roll their eyes even as they feel the inextricable tightening of their matriarchal ties. Tan is an astute storyteller, enticing readers to immerse themselves into these lives of complexity and mystery.
02

The Bonesetter's Daughter
Ruth Young and her widowed mother, LuLing, have always had a tumultuous relationship. Now, before she succumbs to forgetfulness, LuLing gives Ruth some of her writings, which reveal a side of LuLing that Ruth has never known. . . .

In a remote mountain village where ghosts and tradition rule, LuLing grows up in the care of her mute Precious Auntie as the family endures a curse laid upon a relative known as the bonesetter. When headstrong LuLing rejects the marriage proposal of the coffinmaker, a shocking series of events are set in motion–all of which lead back to Ruth and LuLing in modern San Francisco. The truth that Ruth learns from her mother’s past will forever change her perception of family, love, and forgiveness.
03

The Kitchen God's Wife
Winnie and Helen have kept each other's worst secrets for more than fifty years. Now, because she believes she is dying, Helen wants to expose everything. And Winnie angrily determines that she must be the one to tell her daughter, Pearl, about the past—including the terrible truth even Helen does not know. And so begins Winnie's story of her life on a small island outside Shanghai in the 1920s, and other places in China during World War II, and traces the happy and desperate events that led to Winnie's coming to America in 1949.
04

The Hundred Secret Senses
The Hundred Secret Senses is an exultant novel about China and America, love and loyalty, the identities we invent and the true selves we discover along the way. Olivia Laguni is half-Chinese, but typically American in her uneasiness with her patchwork family. And no one in Olivia's family is more embarrassing to her than her half-sister, Kwan Li. For Kwan speaks mangled English, is cheerfully deaf to Olivia's sarcasm, and sees the dead with her "yin eyes."

Even as Olivia details the particulars of her decades-long grudge against her sister (who, among other things, is a source of infuriatingly good advice), Kwan Li is telling her own story, one that sweeps us into the splendor, squalor, and violence of Manchu China. And out of the friction between her narrators, Amy Tan creates a work that illuminates both the present and the past sweetly, sadly, hilariously, with searing and vivid prose.
05

The Valley of Amazement
A sweeping, evocative epic of two women's intertwined fates and their search for identity, that moves from the lavish parlors of Shanghai courtesans to the fog-shrouded mountains of a remote Chinese village.

Spanning more than forty years and two continents, The Valley of Amazement resurrects pivotal episodes in history: from the collapse of China's last imperial dynasty, to the rise of the Republic, the explosive growth of lucrative foreign trade and anti-foreign sentiment, to the inner workings of courtesan houses and the lives of the foreign "Shanghailanders" living in the International Settlement, both erased by World War II.

A deeply evocative narrative about the profound connections between mothers and daughters, The Valley of Amazement returns readers to the compelling territory of Amy Tan's The Joy Luck Club. With her characteristic insight and humor, she conjures a story of inherited trauma, desire and deception, and the power and stubbornness of love.
06

Saving Fish from Drowning
San Francisco art patron Bibi Chen has planned a journey of the senses along the famed Burma Road for eleven lucky friends. But after her mysterious death, Bibi watches aghast from her ghostly perch as the travelers veer off her itinerary and embark on a trail paved with cultural gaffes and tribal curses, Buddhist illusions and romantic desires. On Christmas morning, the tourists cruise across a misty lake and disappear.

With picaresque characters and mesmerizing imagery, Saving Fish from Drowning gives us a voice as idiosyncratic, sharp, and affectionate as the mothers of The Joy Luck Club. Bibi is the observant eye of human nature–the witness of good intentions and bad outcomes, of desperate souls and those who wish to save them. In the end, Tan takes her readers to that place in their own heart where hope is found.
07

The Opposite of Fate: Memories of a Writing Life
Delve into the stories from Amy Tan's life that inspired bestselling novels like The Joy Luck Club and The Valley of Amazement and the new memoir, Where the Past Begins

Amy Tan has touched millions of readers with haunting and sympathetic novels of cultural complexity and profound empathy. With the same spirit and humor that characterize her acclaimed novels, she now shares her insight into her own life and how she escaped the curses of her past to make a future of her own. She takes us on a journey from her childhood of tragedy and comedy to the present day and her arrival as one of the world's best-loved novelists. Whether recalling arguments with her mother in suburban California or introducing us to the ghosts that inhabit her computer, The Opposite of Fate offers vivid portraits of choices, attitudes, charms, and luck in action--a refreshing antidote to the world-weariness and uncertainties we all face today.
08

Rules for Virgins
In her startlingly sensual new story, “Rules for Virgins”—this 43-page jewel of a tale is the first fiction she has published in six years—beloved bestselling author Amy Tan (“The Joy Luck Club,” “The Bonesetter’s Daughter”) takes us deep into the illicit world of 1912 Shanghai, where beautiful courtesans mercilessly compete for the patronage of wealthy gentlemen. For the women, the contest is deadly serious, a perilous game of economic survival that, if played well, can set them up for life as mistresses of the rich and prominent. There is no room for error, however: erotic power is hard to achieve and harder to maintain, especially in the loftiest social circles.

Enter veteran seducer, Magic Gourd, formerly one of Shanghai’s “Top Ten Beauties” and now the advisor and attendant of Violet, an aspiring but inexperienced courtesan. Violet may have the youth and the allure, but Magic Gourd has the cunning and the knowledge without which the younger woman is sure to fail. These ancient tricks of the trade aren't written down, though; to pass them on to her student, Magic Gourd must reach back into her own professional past, bringing her lessons alive with stories and anecdotes from a career spent charming and manipulating men who should have known better but rarely did.

The world of sexual intrigue that Tan reveals in "Rules for Virgins" actually existed once, and she spares no detail in recreating it. But this story is more than intriguing (and sometimes shocking) historical literary fiction. Besides inviting us inside a life that few writers but Tan could conjure up, the intimate confessions of Magic Gourd add up to a kind of military manual for the War of the Sexes’ female combatants. The wisdom conveyed is ancient, specific, and timeless, exposing the workings of vanity and folly, calculation and desire that define the mysterious human heart.
09

On a rainy afternoon, three sisters wish for the rain to stoop, wish they could play in the puddles, wish for something, anything, to do. So Ying-Ying, their grandmother, tells them a tale from long ago. On the night of the Moon Festival, when Ying-ying was a little girl, she encountered the Moon Lady, who grants the secret wishes of those who ask, and learned from her that the best wishes are those you can make come true yourself. This haunting tale, adapted from Amy Tan's best-seller The Joy Luck Club and enhanced by Gretchen Schields's rich, meticulously detailed art, is a book for all to treasure.
10

Where the Past Begins: A Writer's Memoir
In Where the Past Begins, bestselling author of The Joy Luck Club and The Valley of Amazement Amy Tan is at her most intimate in revealing the truths and inspirations that underlie her extraordinary fiction. By delving into vivid memories of her traumatic childhood, confessions of self-doubt in her journals, and heartbreaking letters to and from her mother, she gives evidence to all that made it both unlikely and inevitable that she would become a writer. Through spontaneous storytelling, she shows how a fluid fictional state of mind unleashed near-forgotten memories that became the emotional nucleus of her novels.

Tan explores shocking truths uncovered by family memorabilia—the real reason behind an IQ test she took at age six, why her parents lied about their education, mysteries surrounding her maternal grandmother—and, for the first time publicly, writes about her complex relationship with her father, who died when she was fifteen. Supplied with candor and characteristic humor, Where the Past Begins takes readers into the idiosyncratic workings of her writer’s mind, a journey that explores memory, imagination, and truth, with fiction serving as both her divining rod and link to meaning.