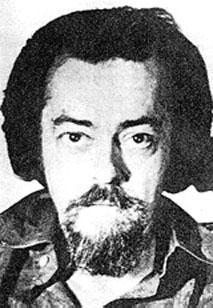 Linwood Vrooman Carter was an American author of science fiction and fantasy, as well as an editor and critic. He usually wrote as Lin Carter; known pseudonyms include H. P. Lowcraft (for an H. P. Lovecraft parody) and Grail Undwin.

Carter had a marked tendency toward self-promotion in his work, frequently citing his own writings in his nonfiction to illustrate points and almost always including at least one of his own pieces in the anthologies he edited. The most extreme instance is his novel Lankar of Callisto, which features Carter himself as the protagonist.

As an author, he was a member of the all-male literary banqueting club the Trap Door Spiders, which served as the basis of Isaac Asimov's fictional group of mystery solvers the Black Widowers. Carter himself was the model for the Mario Gonzalo character. He was also a member of the Swordsmen and Sorcerers' Guild of America (SAGA), a loose-knit group of Heroic fantasy authors founded in the 1960s, some of whose work he anthologized in the Flashing Swords! series. Carter is most closely associated with fellow author L. Sprague de Camp, who served as a mentor and collaborator and was a fellow member of both the Trap Door Spiders and SAGA.

Carter served in Korea, after which he attended Columbia University. He was a copywriter for some years before writing full-time. Carter resided in East Orange, New Jersey, in his later years, and drank and smoked heavily. It may have been his smoking that gave him oral cancer in 1985. Only his status as a Korean War veteran enabled him to receive extensive surgery. However, it failed to cure the cancer and left him disfigured.

In the last year before his death, he had begun to reappear in print with a new book in his Terra Magica series, a long-promised Prince Zarkon pulp hero pastiche, Horror Wears Blue, and a regular column for the magazine Crypt of Cthulhu.[5] Despite these successes, Carter increased his alcohol intake, becoming a borderline alcoholic and further weakening his body. His cancer resurfaced, spreading to his throat and leading to his death in Montclair, New Jersey, in 1988.

Lin Carter is the author of books: Conan the Buccaneer (Conan, #6), Tolkien: A Look Behind the Lord of the Rings, Flashing Swords! #1, Thongor and the Wizard of Lemuria (Thongor, #1), Under the Green Star (Green Star, #1), Jandar Of Callisto, Flashing Swords! 2, O SENHOR DOS ANEIS VOLUME UNICO - JRR TOLKIEN, Thongor Against the Gods (Thongor, #3), Sky Pirates of Callisto

Conan the Buccaneer (Conan, #6)
The hunt for a beautiful princess--and a king's treasure--brings Conan to the edge of the world, and the devil-ridden lands of the Nameless Isle. Awaiting him will be his fiercest battle: the cold steel of his sword against the hell-fed powers of the sorcerer Thoth-Ammon.
02

Tolkien: A Look Behind the Lord of the Rings
Tolkien: A Look Behind The Lord of the Rings is a study of the works of J.R.R. Tolkien written by Lin Carter. It was 1st published in paper by Ballantine in 3/69 & went thru numerous additional printings. It was among the earliest full-length critical works devoted to Tolkien's fantasies, the 1st to set his writings in their proper context in the history of fantasy. It was the earliest of three studies by Carter devoted to fantasy/horror writers & the history of fantasy, being followed by Lovecraft: A Look Behind the Cthulhu Mythos ('72) & Imaginary Worlds: The Art of Fantasy ('73), establishing him as an authority on the genre, indirectly leading to his editorial guidance of the Ballantine Adult Fantasy series. Gollancz published a cloth edition updated by Adam Roberts in 8/03.
The study serves as an introduction for those unfamiliar with Tolkien's work. An introduction briefly reviews the publishing phenomenon of The Lord of the Rings & its popularity in the wake of the 1st paper editions in the '60s, after which he devotes three chapters to a short biography of the author thru the late '60s, including an account of how it was written. Four chapters explaining Middle-earth & summarizing the stories of The Hobbit & the three volumes of The Lord of the Rings follow, for the benefit of readers who may not have actually read the works. Carter next turns to the question of what the works are, a point of some confusion at the time. The then-current vogue for realistic fiction provided critics with few tools for evaluating an out-&-out fantasy on its own terms. Attempts to deconstruct it as a satire or allegory were rife. Carter firmly debunks these efforts, supporting his argument by drawing on Tolkien's own published ruminations on fantasy's functions & purposes. He then contextualizes the works by sketching the history of written fantasy from its earliest appearance in the epic poetry of the ancient world thru the heroic poetry of the Dark & the prose romances of the Middle Ages, down to the fairy tales, ghost stories & gothic novels of the early modern era & the rediscovery of the genre by writers of the 19-20th centuries prior to & contemporary with Tolkien. The origins of the modern genre are discovered in the writings of Wm Morris, Lord Dunsany & E.R. Eddison & followed thru the works of authors they influenced, including H.P. Lovecraft, Fletcher Pratt, L. Sprague de Camp & Mervyn Peake. Carter next highlights some of Tolkien's particular debts to his predecessors, tracing the motifs & names he utilizes back to their beginnings in Norse mythology & highlighting other echoes in his work deriving from legend & history. Finally noted is Tolkien's influence on contemporary fantasy, which was just beginning to make itself felt, primarily in the juvenile fantasies of Carol Kendall, Alan Garner & Lloyd Alexander.
03

The Still less than momentary qualm which Death experienced at this point was far deeper and stronger than that which he had felt in the case of Lithquil. Fafhrd and the Mouser had served him well and in vastly more varied fashion the the Mad Duke.
-"The Sadness of the Executioner"by Fritz Leiber

Morreion made a furious motion; as his hand swept the air, it left a trail of sparks. "Magic derives from personal force! My passion alone will defeat the archveults! I glory in the forthcoming confrontation. Ah, but they will regret their deeds!"
-"Morreion" by Jack Vance

Stunned, beaten, naked, with hardly a tool or weapon among them, the merfolk followed their lord. Tauno hung, fists clenched on harpoon, until they were out of sight. The last stones of the royal hall toppled, and Liri was a ruin.
-"The Merman's Children" by Poul Anderson

Three goblins were entangled in the webs. They kicked and struggled furiously, spittling like cats, but only managed to become more tightly and completely enmeshed in the sticky green stuff. The six other goblins came flying, howling, at him.
-"The Higher Heresies of Oolimar" by Lin Carter (Amalrik the Mangod)
04

Thongor and the Wizard of Lemuria (Thongor, #1)
Thongor of Valkarth--mightiest warrior of the ancient continent of Lemuria, before the dawn of history--launches into this saga with this rousing adventure of swordplay and sorcery. The ancient dragon kings have deemed that the hour is right to regain their dominance over Earth--and only Thongor and his companions, aided by the science and magic of the wizard Sharajsha, stand between mankind and the night of doom!
05

Under the Green Star (Green Star, #1)
On Earth, life held for him only the fate of a recluse--confined to daydreams and the lore of ancient wonders but apparently destined never to share them--until he found the formula that let him cross space to the world of the Green Star. There, appearing in the body of a fabled hero, he is to experience all that his heroic fantasies had yearned for. A princess to be saved . . . an invader to be thwarted . . . and otherworldly monsters to be faced! A thrilling adventure in the grand tradition of Edgar Rice Burroughs, as only Lin Carter can tell it! This edition includes an afterword by Lin Carter.
06

on Callisto, moon of Jupiter, a world of black and crimson jungles where the hand of every man is lifted in eternal enmity against every other... a savage, hostile world on which he is first held prisoner by the fearsome insect-men, only to be freed for a more binding slavery in the deadly clutches of the insidious Sky Pirates... and in the incalculable aura of the beautiful princess Darloona who elicits love almost beyond the limits of his mortal soul...

The carpet shuddered; a ripping motion ran along its fringes. Foot by foot, it rose from the pavement, until it was above the heads of those standing in the courtyard. The carpet continued to rise until it towered above the roof of the palace.
THE RUG AND THE BULL L. Sprague de Camp

Elric's ancestors had made pacts, thousands of years before, with all the elementals who who controlled the animal world. In the past he had summoned help from various of these spirits, but never from the one he now sought to call. From his mouth began to issue the ancient, beautiful, convoluted words of Melniboné's High Speech
THE JADE MAN'S EYES Michael Moorcock

Still watching Trystan, her hands veiling against the play of the ensorcelling light, Hertha saw his lax fingers move, clench into a fist. And then she witnessed the great effort of that gesture, and she knew that he was in battle, silent though he stood.
TOADS OF GRIMMERDALE Andre Norton

Hektor's fingers dug into Brak's eyesockets. They pressed deep. Suddenly Brak touched metal. He closed his fist on the dagger hilt, aimed the point over his shoulder, hurled his fist up and back as Hektor's thumbs pressured his eyeballs into awful agony.
GHOUL'S GARDEN John Jakes

Stumbling upon the Lost City of Arangkhor in the trackless jungles of Cambodia, Jandar was mysteriously transported to the strange world of Callisto where the teeming black and crimson jungles sprawl under skies of golden vapour.

Now Jandar the Alien fears for the safety of the beautiful princess Darloona, a captive of the dreaded Sky Pirates. He resorts to a desperate plan to free her but fate and treachery alter his course and Jandar is taken by the Perushtarians. Abandoned in the loathsome slave-pens of Narouk, his destiny is to fight for his life in a barbaric arena of death...