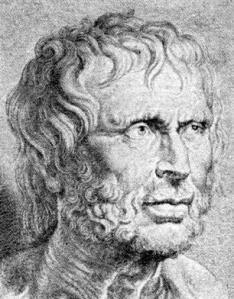 Lucius Annaeus Seneca (often known simply as Seneca, in Portugueses Sêneca; ca. 4 BC – 65 AD) was a Roman Stoic philosopher, statesman, dramatist, and in one work humorist, of the Silver Age of Latin literature. He was tutor and later advisor to emperor Nero. While he was later forced to commit suicide for alleged complicity in the Pisonian conspiracy to assassinate Nero, the last of the Julio-Claudian emperors, he may have been innocent.

Seneca is the author of books: Letters from a Stoic, On the Shortness of Life, Medea, Four Tragedies and Octavia, Phaedra, Dialogues and Essays, The Stoic Philosophy of Seneca: Essays and Letters, L'arte di essere felici, How to Die: An Ancient Guide to the End of Life, Moral Essays: Volume I De Providentia. De Constantia. De Ira. De Clementia

Letters from a Stoic
The power and wealth which Seneca the Younger (c.4 B.C. - A.D. 65) acquired as Nero's minister were in conflict with his Stoic beliefs. Nevertheless he was the outstanding figure of his age. The Stoic philosophy which Seneca professed in his writings, later supported by Marcus Aurelius, provided Rome with a passable bridge to Christianity. Seneca's major contribution to Stoicism was to spiritualize and humanize a system which could appear cold and unrealistic.

Selected from the Epistulae Morales ad Lucilium, these letters illustrate the upright ideals admired by the Stoics and extol the good way of life as seen from their standpoint. They also reveal how far in advance of his time were many of Seneca's ideas - his disgust at the shows in the arena or his criticism of the harsh treatment of slaves. Philosophical in tone and written in the 'pointed' style of the Latin Silver Age these 'essays in disguise' were clearly aimed by Seneca at posterity.

On the Shortness of Life
The Stoic writings of the philosopher Seneca offer powerful insights into the art of living, the importance of reason and morality, and continue to provide profound guidance to many through their eloquence, lucidity and timeless wisdom.

Throughout history, some books have changed the world. They have transformed the way we see ourselves—and each other. They have inspired debate, dissent, war and revolution. They have enlightened, outraged, provoked and comforted. They have enriched lives—and destroyed them.

Now, Penguin brings you the works of the great thinkers, pioneers, radicals and visionaries whose ideas shook civilization, and helped make us who we are. Penguin's Great Ideas series features twelve groundbreaking works by some of history's most prodigious thinkers, and each volume is beautifully packaged with a unique type-drive design that highlights the bookmaker's art. Offering great literature in great packages at great prices, this series is ideal for those readers who want to explore and savor the Great Ideas that have shaped the world.
03

Medea
Ahl's translations of three Senecan tragedies will gratify and challenge readers and performers. With stage performance specifically in mind, Ahl renders Seneca's dramatic force in a modern idiom and style that move easily between formality and colloquialism as the text demands, and he strives to reproduce the richness of the original Latin, to retain the poetic form, images, wordplays, enigmas, paradoxes, and dark humor of Seneca's tragedies.

In this powerful and imaginative translation of Medea, Frederick Ahl retains the compelling effects of the monologues, as well as the special feeling and pacing of Seneca's choruses.
04

Four Tragedies and Octavia
Based on the legends used in Greek drama, Seneca's plays are notable for the exuberant ruthlessness with which disastrous events are foretold and then pursued to their tragic and often bloodthirsty ends. Thyestes depicts the menace of an ancestral curse hanging over two feuding brothers, while Phaedra portrays a woman tormented by fatal passion for her stepson. In The Trojan Women, the widowed Hecuba and Andromache await their fates at the hands of the conquering Greeks, and Oedipus follows the downfall of the royal House of Thebes. Octavia is a grim commentary on Nero's tyrannical rule and the execution of his wife, with Seneca himself appearing as an ineffective counsellor attempting to curb the atrocities of the emperor.
05

Phaedra
Ahl's translations of three Senecan tragedies will gratify and challenge readers and performers. With stage performance specifically in mind, Ah1 renders Seneca's dramatic force in a modern idiom and style that move easily between formality and colloquialism as the text demands, and he strives to reproduce the richness of the original Latin, to retain the poetic form, images, wordplays, enigmas, paradoxes, and dark humor of Seneca's tragedies.

Here is a moving and accomplished translation of this complex play dealing the the violent passions stirred by innocence and beauty and the terrible power of ideology, hatred, and misunderstanding.
06

Dialogues and Essays
This superb volume offers the finest translation of Seneca's dialogues and essays in print, capturing the full range of his philosophical interests. Here the Stoic philosopher outlines his thoughts on how to live in a troubled world. Tutor to the young emperor Nero, Seneca wrote exercises in practical philosophy that draw upon contemporary Roman life and illuminate the intellectual concerns of the day. They also have much to say to the modern reader, as Seneca ranges widely across subjects such as the shortness of life, tranquility of mind, anger, mercy, happiness, and grief at the loss of a loved one. Seneca's accessible, aphoristic style makes his writing especially attractive as an introduction to Stoic philosophy, and belies its reputation for austerity and dogmatism.

This edition combines a clear and modern translation by John Davies with Tobias Reinhardt's fascinating introduction to Seneca's career, literary style, and influence, including a superb summary of Stoic philosophy and Seneca's interpretation of it. The book's notes are the fullest of any comparable edition.


The selections are drawn from the essays, or dialogues, and the "Consolations;" from the treatises, of which "On Clemency," addressed to the young Nero, is included here; and from the Letters to Lucilius, which have to do not only with philosophical subjects but also with Seneca's personal experiences, such as journeys and visits.


Moses Hadas has selected letters and essays which reveal Seneca's major philosophical themes—the relationship of the individual to society and to the gods; the meaning of pain and misfortune; man's attitudes to change, time, and death; and the nature of the highest good and of the happy life. In his Introduction, Professor Hadas discusses Seneca's life and work, tracing the history of his reputation; comments on Seneca's style; and outlines the origins and tenets of Stoicism.

How to Die: An Ancient Guide to the End of Life

“It takes an entire lifetime to learn how to die,” wrote the Roman Stoic philosopher Seneca (c. 4 BC–65 AD). He counseled readers to “study death always,” and took his own advice, returning to the subject again and again in all his writings, yet he never treated it in a complete work. How to Die gathers in one volume, for the first time, Seneca’s remarkable meditations on death and dying. Edited and translated by James Romm, How to Die reveals a provocative thinker and dazzling writer who speaks with a startling frankness about the need to accept death or even, under certain conditions, to seek it out.

Seneca believed that life is only a journey toward death and that one must rehearse for death throughout life. Here, he tells us how to practice for death, how to die well, and how to understand the role of a good death in a good life. He stresses the universality of death, its importance as life’s final rite of passage, and its ability to liberate us from pain, slavery, or political oppression.

Moral Essays: Volume I De Providentia. De Constantia. De Ira. De Clementia
Seneca, Lucius Annaeus, born at Corduba (Cordova) ca. 4 BCE, of a prominent and wealthy family, spent an ailing childhood and youth at Rome in an aunt's care. He became famous in rhetoric, philosophy, money-making, and imperial service. After some disgrace during Claudius' reign he became tutor and then, in 54 CE, advising minister to Nero, some of whose worst misdeeds he did not prevent. Involved (innocently?) in a conspiracy, he killed himself by order in 65. Wealthy, he preached indifference to wealth; evader of pain and death, he preached scorn of both; and there were other contrasts between practice and principle.

We have Seneca's philosophical or moral essays (ten of them traditionally called Dialogues)--on providence, steadfastness, the happy life, anger, leisure, tranquility, the brevity of life, gift-giving, forgiveness-- and treatises on natural phenomena. Also extant are 124 epistles, in which he writes in a relaxed style about moral and ethical questions, relating them to personal experiences; a skit on the official deification of Claudius, "Apocolocyntosis" (in Loeb number 15); and nine rhetorical tragedies on ancient Greek themes. Many epistles and all his speeches are lost.

His moral essays are collected in Volumes I-III of the Loeb Classical Library's ten-volume edition of Seneca.