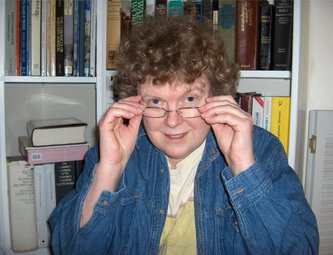 Joanna lives in the foothills of the Blue Ridge with her family, a medium-sized mutt and a faux Himalayan cat.

She writes Historical Romances set in England and France during the Napoleonic Wars. She's fascinated by that time and place - such passionate conviction and burning idealism ... and really sexy clothes.

The Spymaster's Lady (Spymasters, #1)
She's braved battlefields, stolen dispatches, played roles from worldly to naive, lady to boy. But Annique Villiers, elusive spy Fox Cub, is thrown in prison with British spymaster Robert Grey, ordered to enter France and bring her back. Their uneasy alliance holds, but passion builds as they flee.
02

Someone is stalking French agent Justine DeCabrillac through London's gray streets. Under cover of the rain, the assassin strikes--and Justine staggers to the door of the one man who can save her.  The man she once loved.  The man she hated.  Adrian Hawkhurst.

Adrian wanted the treacherous beauty known as "Owl" back in his bed, but not wounded and clinging to life. Now, as he helps her heal, the two must learn to trust each other to confront the hidden menace that's trying to kill them--and survive long enough to explore the passion simmering between them once again.
03

The Forbidden Rose (Spymasters, #3)
Marguerite de Fleurignac, once privileged aristocrat, is on the run, disguised as penniless British governess Maggie Duncan. William Doyle, England's top spy, has a score to settle with her, recognized when he pulls her from her burned-out chateau. Drawn inexorably into mad revolutionary Paris, they gamble on an inadmissible love destined for betrayal.
04

My Lord and Spymaster (Spymasters, #2)
A daring beauty, she was infamous for taking chances . . .

Raised as a poor but cunning pickpocket, Jess Whitby may have grown into a wealthy young woman, but now she must once again rely on her guile. Her father's been wrongly accused of selling secrets to Napoleon, and he's going to be hanged—unless Jess finds the real traitor in the London underworld. She never dreamed her search would begin by waking up naked in a rude captain's bed. Or how little she'd mind.

Now she'll risk everything for love...

When Captain Sebastian Kennett prevents a kidnapping on the London docks, he takes the headstrong would-be victim home. He's infatuated with her courageous spirit. She's enthralled by his commanding strength and the sexy spark in his eyes. Then she discovers something else about the spellbinding seaman: He could be the traitor she's hunting, the man whose next move could determine her father's fate—and her future as well.
05

Rogue Spy (Spymasters #5)
Thomas Paxton and Camille Leyland were starving Caché orphans, trained to be assassins for the Revolution. After Pax and Cami confess infiltrating the British Secret Service, they plan to ambush the evil Merchant. Must they go rogue to stay together, overcome secrets of the past? Plus preview.
06

Beauty Like the Night (Spymasters, #6)
Severine de Cabrillac, orphan of the French revolution and sometime British intelligence agent, has tried to leave spying behind her. Now she devotes herself to investigating crimes in London and finding justice for the wrongly accused.

Raoul Deverney, an enigmatic half-Spaniard with enough secrets to earn even a spy's respect, is at her door demanding help. She's the only one who can find the killer of his long-estranged wife and rescue her missing fourteen-year-old daughter.

Severine reluctantly agrees to aid him, even though she knows the growing attraction between them makes it more than unwise. Their desperate search for the girl unleashes treason and murder. . . and offers a last chance for two strong, wounded people to find love.
07

Her Ladyship's Companion (Spymasters, #0.5)
LOVE AND PERIL ON THE CLIFFS OF CORNWALL — Beautiful Melissa Rivenwood was leaving Mrs. Brody's Seminary for the Daughters of Gentlemen for a new life. But when she accepted the position as companion to the formidable Lady Dorothy, spirited Melissa could not have known that she would soon be caught up in a web of passion and intrigue at beautiful and remote Vinton Manor.

Giles Tarsin, her haughty employer, is maddeningly aloof--and irresistibly attractive. Darkly handsome Sir Adrian Hawkhurst admires her undisguisedly with, Melissa suspects, the most impure intentions. Harold Bosworth, a family connection, appears to be ever the gentleman. But why is seven-year-old Robbie, an orphan like Melissa and the future Earl of Keptford, so terrified? Before long, Melissa is struggling to unravel dark family secrets that will lead her suspicions to center on just one man...the one man she loves!
08

Gambled Away: A Historical Anthology
Get revenge. Pay a debt. Save a soul. Lose your heart.

Spanning centuries and continents, five brand-new novellas from beloved historical romance authors tell the stories of men and women who find themselves wagered in a game of chance and are forced to play for the highest stakes of all: love.

Gideon and the Den of Thieves by Joanna Bourne

London, 1793 - Soldier of fortune Gideon Gage has come home from halfway around the world, fully prepared to face down a ruthless gang to save his sister. But there's one member of the gang he could never have been prepared for: fascinating Aimée, driven from her own home by the French Revolution and desperately in need of his help.

Raising The Stakes by Isabel Cooper

California, 1938 - When the flute she won in last night's poker game unexpectedly summons an elven warrior bound to her service, two-bit con artist Sam takes quick advantage. With Talathan's fairy powers at her command, her shakedown of a crooked preacher is a sure thing...but would she rather take a gamble on love?

All or Nothing by Rose Lerner

England, 1819 - Architect Simon Radcliffe-Gould needs someone to pose as his mistress so he can actually get some work done at a scandalous house party. Irrepressible gambling den hostess Maggie da Silva would rather be his mistress, but she'll take what she can get…

The Liar's Dice by Jeannie Lin

Tang Dynasty China, 849 A.D. - Lady Bai's first taste of freedom brings her face to face with murder. A dangerous and enigmatic stranger becomes her closest ally as she investigates the crime, but can she trust her heart or her instincts when everyone is playing a game of liar's dice?

Denver, 1868 - After agonizing years in the Civil War’s surgical tents, Union doctor James Madison has nothing left to lose. But when beautiful, tortured Helen Winters is the prize in a high-stakes game of poker, he goes all in to save her—and maybe his own soul.
09

My True Love Hath My Heart
10

Upstairs and downstairs, Holbourne Abbey is abuzz with preparations for a grand ball to celebrate the year’s most festive—and romantic—holiday. For at the top of each guest’s wish list is a last chance to find true love before the New Year…

A chance meeting beneath the mistletoe, a stolen glance across the dance floor—amid the sumptuous delicacies, glittering decorations, and swell of the orchestra, every duchess and debutante, lord and lackey has a hopeful heart. There's the headstrong heiress who must win back her beloved by midnight—or be wed to another....the spinster whose fateful choice to relinquish love may hold one more surprise for her...a widow yearning to glimpse her long-lost love for even one sweet, fleeting interlude...a charming rake who finds far more than he bargained for. And many other dazzling, romantic tales in this star-studded collection that will fill your heart and spice up your holidays...