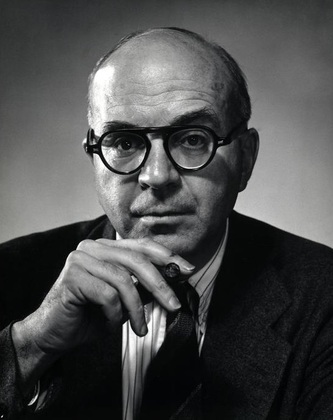 John Roderigo Dos Passos was an American novelist and artist.

He received a first-class education at The Choate School, in Connecticut, in 1907, under the name John Roderigo Madison. Later, he traveled with his tutor on a tour through France, England, Italy, Greece and the Middle East to study classical art, architecture and literature.

In 1912 he attended Harvard University and, after graduating in 1916, he traveled to Spain to continue his studies. In 1917 he volunteered for the S.S.U. 60 of the Norton-Harjes Ambulance Corps, along with E.E. Cummings and Robert Hillyer.

By the late summer of 1918, he had completed a draft of his first novel and, at the same time, he had to report for duty in the U.S. Army Medical Corps, in Pennsylvania.
When the war was over, he stayed in Paris, where the U.S. Army Overseas Education Commission allowed him to study anthropology at the Sorbonne.

Considered one of the Lost Generation writers, Dos Passos published his first novel in 1920, titled One Man's Initiation: 1917, followed by an antiwar story, Three Soldiers, which brought him considerable recognition. His 1925 novel about life in New York City, titled Manhattan Transfer was a success.

In 1937 he returned to Spain with Hemingway, but the views he had on the Communist movement had already begun to change, which sentenced the end of his friendship with Hemingway and Herbert Matthews.

In 1930 he published the first book of the U.S.A. trilogy, considered one of the most important of his works.

Only thirty years later would John Dos Passos be recognized for his significant contribution in the literary field when, in 1967, he was invited to Rome to accept the prestigious Antonio Feltrinelli Prize.

Between 1942 and 1945, Dos Passos worked as a journalist covering World War II and, in 1947, he was elected to the American Academy of Arts and Letters.
Tragedy struck when an automobile accident killed his wife, Katharine Smith, and cost him the sight in one eye. He remarried to Elizabeth Hamlyn Holdridge in 1949, with whom he had an only daughter, Lucy Dos Passos, born in 1950.

Over his long and successful carreer, Dos Passos wrote forty-two novels, as well as poems, essays and plays, and created more than four hundred pieces of art.

More detailed information about Dos Passos and his carrer can be found at Wikipedia.

The 42nd Parallel (U.S.A., #1)
With his U.S.A. trilogy, comprising THE 42nd PARALLEL, 1919, and THE BIG MONEY, John Dos Passos is said by many to have written the great American novel. While Fitzgerald and Hemingway were cultivating what Edmund Wilson once called their "own little corners," John Dos Passos was taking on the world. Counted as one of the best novels of the twentieth century by the Modern Library and by some of the finest writers working today, U.S.A. is a grand, kaleidoscopic portrait of a nation, buzzing with history and life on every page.

The trilogy opens with THE 42nd PARALLEL, where we find a young country at the dawn of the twentieth century. Slowly, in stories artfully spliced together, the lives and fortunes of five characters unfold. Mac, Janey, Eleanor, Ward, and Charley are caught on the storm track of this parallel and blown New Yorkward. As their lives cross and double back again, the likes of Eugene Debs, Thomas Edison, and Andrew Carnegie make cameo appearances.
02

U.S.A.: The 42nd Parallel / 1919 / The Big Money
In the novels that make up the U.S.A.trilogy—The 42nd Parallel, 1919, and The Big Money—Dos Passos creates an unforgettable collective portrait of America, shot through with sardonic comedy and brilliant social observation. He interweaves the careers of his characters and the events of their time with a narrative verve and breathtaking technical skill that make U.S.A. among the most compulsively readable of modern classics.

The U.S.A. trilogy is filled with American speech: labor radicals and advertising executives, sailors and stenographers, interior decorators and movie stars. Their crisscrossing destinies take in wars and revolutions, desperate love affairs and harrowing family crises, corrupt public triumphs and private catastrophes, in settings that include the trenches of World War I, insurgent Mexico, Hollywood studios in the silent era, Wall Street boardrooms, and the tumultuous streets of Boston just before the execution of Sacco and Vanzetti.
03

Manhattan Transfer
Considered by many to be John Dos Passos's greatest work, Manhattan Transfer is an "expressionistic picture of New York" (New York Times) in the 1920s that reveals the lives of wealthy power brokers and struggling immigrants alike. From Fourteenth Street to the Bowery, Delmonico's to the underbelly of the city waterfront, Dos Passos chronicles the lives of characters struggling to become a part of modernity before they are destroyed by it.

More than seventy-five years after its first publication, Manhattan Transfer still stands as "a novel of the very first importance" (Sinclair Lewis). It is a masterpiece of modern fiction and a lasting tribute to the dual-edged nature of the American dream.
04

1919 (U.S.A., #2)
With 1919, the second volume of his U.S.A. trilogy, John Dos Passos continues his "vigorous and sweeping panorama of twentieth-century America" (Forum), lauded on publication of the first volume not only for its scope, but also for its groundbreaking style. Again, employing a host of experimental devices that would inspire a whole new generation of writers to follow, Dos Passos captures the many textures, flavors, and background noises of modern life with a cinematic touch and unparalleled nerve.

1919 opens to find America and the world at war, and Dos Passos's characters, many of whom we met in the first volume, are thrown into the snarl. We follow the daughter of a Chicago minister, a wide-eyed Texas girl, a young poet, a radical Jew, and we glimpse Woodrow Wilson, Theodore Roosevelt, and the Unknown Soldier.
05

The Big Money (U.S.A., #3)
THE BIG MONEY completes John Dos Passos's three-volume "fable of America's materialistic success and moral decline" (American Heritage) and marks the end of "one of the most ambitious projects that an American novelist has ever undertaken" (Time). Here we come back to America after the war and find a nation on the upswing. Industrialism booms. The stock market surges. Lindbergh takes his solo flight. Henry Ford makes automobiles. From New York to Hollywood, love affairs to business deals, it is a country taking the turns too fast, speeding toward the crash of 1929.

Ultimately, whether the novels are read together or separately, they paint a sweeping portrait of collective America and showcase the brilliance and bravery of one of its most enduring and admired writers.
06

Three Soldiers
A searing novel exposing the fate of the common soldier during World War I. Driven by the idealism that infected many young Americans at the time (including Ernest Hemingway), author John Dos Passos joined the Ambulance Corps. His rapid and profound disillusionment forms the core of this fierce denouncement of the military and of the far-reaching social implications of its exploitation of young men. 400 pp.
07

One Man's Initiation: 1917
As the "Great War" inspired much great poetry, including that of Siegfried Sassoon and Robert Graves, so did it inspire compelling prose. John Dos Passos volunteered to drive an ambulance in France during the First World War. The brutality of his experiences turned him against not only war, but capitalism and inspired him to write One Man's Initiation: 1917.
08

Mr. Wilson's War: From the Assassination of McKinley to the Defeat of the League of Nations
A dazzling work of American history from the author of the USA trilogy: Beginning with the assassination of McKinley & ending with the defeat of the League of Nations by the US Senate, the 25-year period covered by Dos Passos in this lucid & fascinating narrative changed the whole destiny of America. This is the story of the war we won & the peace we lost, told with a clear historical perspective & a warm interest in the remarkable people who guided the USA thru one of the most crucial periods. Foremost in the cast of characters is Woodrow Wilson, the shy, brilliant, revered & misunderstood “schoolmaster,” whose administration was a complex of apparent contradictions. Wilson had almost no interest in foreign affairs when he was first elected, yet later, in proposing the League of Nations, he was to play a major role in international politics. During his first summer in office, without any previous experience in banking, he pushed thru the Federal Reserve Bank Act, perhaps his most lasting contribution. Reelected in 1916 on the rallying cry, “He kept us out of war,” he shortly found himself & his country inextricably involved in the European conflict. Dos Passos has brilliantly coordinated the political, military & economic themes so that the story line never falters. First published in 1962, Mr Wilson’s War is one of the great books.
09

The Best Times: An Informal Memoir
Beginning with a wonderful portrait of tha author's remarkable father, the book follows Dos Passos through Harvard; through World War I as an ambulance driver in France & Italy; through the chaotic postwar Middle East; through the vast reaches of Soviet Russia; the 'Russian Experiment' & through the literary world on both sides of the Atlantic.
10

Novels, 1920-1925: One Man's Initiation: 1917 / Three Soldiers / Manhattan Transfer
Before he began the U.S.A. trilogy, John Dos Passos prefigured his groundbreaking epic through three novels that provide a fascinating glimpse into his stunning achievement as an avant-garde prose stylist while they incisively chronicle early twentieth century Europe and America. "Manhattan Transfer" (1925), a kaleidoscopic portrait of New York City, is universally acknowledged as a modernist masterpiece. This lyrical, exuberantly experimental novel orchestrates the rising and falling fortunes of more than a dozen characters: Wall Street speculators, theatrical celebrities, impoverished immigrants, bootleggers, and anarchist rebels move through a maze of tenements and skyscrapers. The impressionistic "One Man's Initiation: 1917" (1920) draws upon Dos Passos' experiences driving ambulances in France to portray the fear, uncertainty, and camaraderie of war. This Library of America edition includes passages censored by the book's original publisher. "Three Soldiers" (1921), here with the author's own introduction, delves deeply into the spiritual toll of war, dramatizing American servicemen fighting in battle, struggling against dehumanizing military regimentation, and experiencing the chaotic pleasures of Paris.
Along with its companion volumes "Travel Books and Other Writings" (see opposite page) and U.S.A. (Library of America, 1996), "Novels 1920-1925" enriches our understanding of Dos Passos as a writer, thinker, and witness to history.