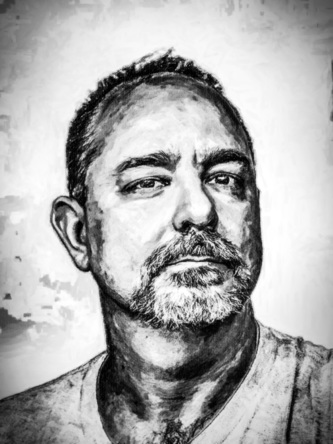 John Scalzi, having declared his absolute boredom with biographies, disappeared in a puff of glitter and lilac scent.

(If you want to contact John, using the mail function here is a really bad way to do it. Go to his site and use the contact information you find there.)

Old Man's War (Old Man's War, #1)
John Perry did two things on his 75th birthday. First he visited his wife's grave. Then he joined the army.

The good news is that humanity finally made it into interstellar space. The bad news is that planets fit to live on are scarce-- and alien races willing to fight us for them are common. So: we fight. To defend Earth, and to stake our own claim to planetary real estate. Far from Earth, the war has been going on for decades: brutal, bloody, unyielding.

Earth itself is a backwater. The bulk of humanity's resources are in the hands of the Colonial Defense Force. Everybody knows that when you reach retirement age, you can join the CDF. They don't want young people; they want people who carry the knowledge and skills of decades of living. You'll be taken off Earth and never allowed to return. You'll serve two years at the front. And if you survive, you'll be given a generous homestead stake of your own, on one of our hard-won colony planets.

John Perry is taking that deal. He has only the vaguest idea what to expect. Because the actual fight, light-years from home, is far, far harder than he can imagine--and what he will become is far stranger.
02

Life couldn’t be better…until Andrew begins to pick up on the fact that:
(1) every Away Mission involves some kind of lethal confrontation with alien forces
(2) the ship’s captain, its chief science officer, and the handsome Lieutenant Kerensky always survive these confrontations
(3) at least one low-ranked crew member is, sadly, always killed.

Not surprisingly, a great deal of energy below decks is expended on avoiding, at all costs, being assigned to an Away Mission. Then Andrew stumbles on information that completely transforms his and his colleagues’ understanding of what the starship Intrepid really is…and offers them a crazy, high-risk chance to save their own lives.
03

The Ghost Brigades (Old Man's War, #2)
The Ghost Brigades are the Special Forces of the Colonial Defense Forces, elite troops created from the DNA of the dead and turned into the perfect soldiers for the CDF's toughest operations. They’re young, they’re fast and strong, and they’re totally without normal human qualms.

The universe is a dangerous place for humanity—and it's about to become far more dangerous. Three races that humans have clashed with before have allied to halt our expansion into space. Their linchpin: the turncoat military scientist Charles Boutin, who knows the CDF’s biggest military secrets. To prevail, the CDF must find out why Boutin did what he did.

Jared Dirac is the only human who can provide answers -- a superhuman hybrid, created from Boutin's DNA, Jared’s brain should be able to access Boutin's electronic memories. But when the memory transplant appears to fail, Jared is given to the Ghost Brigades.

At first, Jared is a perfect soldier, but as Boutin’s memories slowly surface, Jared begins to intuit the reason’s for Boutin’s betrayal. As Jared desperately hunts for his "father," he must also come to grips with his own choices. Time is running out: The alliance is preparing its offensive, and some of them plan worse things than humanity’s mere military defeat…
04

Lock In (Lock In, #1)
Not too long from today, a new, highly contagious virus makes its way across the globe. Most who get sick experience nothing worse than flu, fever and headaches. But for the unlucky one percent - and nearly five million souls in the United States alone - the disease causes "Lock In": Victims fully awake and aware, but unable to move or respond to stimulus. The disease affects young, old, rich, poor, people of every color and creed. The world changes to meet the challenge.

A quarter of a century later, in a world shaped by what's now known as "Haden's syndrome," rookie FBI agent Chris Shane is paired with veteran agent Leslie Vann. The two of them are assigned what appears to be a Haden-related murder at the Watergate Hotel, with a suspect who is an "integrator" - someone who can let the locked in borrow their bodies for a time. If the Integrator was carrying a Haden client, then naming the suspect for the murder becomes that much more complicated.

But "complicated" doesn't begin to describe it. As Shane and Vann began to unravel the threads of the murder, it becomes clear that the real mystery - and the real crime - is bigger than anyone could have imagined. The world of the locked in is changing, and with the change comes opportunities that the ambitious will seize at any cost. The investigation that began as a murder case takes Shane and Vann from the halls of corporate power to the virtual spaces of the locked in, and to the very heart of an emerging, surprising new human culture. It's nothing you could have expected.
05

That is, until his and Jane's past reaches out to bring them back into the game--as leaders of a new human colony, to be peopled by settlers from all the major human worlds, for a deep political purpose that will put Perry and Sagan back in the thick of interstellar politics, betrayal, and war.
06

Fuzzy Nation (Fuzzy Sapiens #7)
Jack Holloway works alone, for reasons he doesn't care to talk about. Hundreds of miles from ZaraCorp's headquarters on planet, 178 light-years from the corporation's headquarters on Earth, Jack is content as an independent contractor, prospecting and surveying at his own pace. As for his past, that's not up for discussion.

Then, in the wake of an accidental cliff collapse, Jack discovers a seam of unimaginably valuable jewels, to which he manages to lay legal claim just as ZaraCorp is cancelling their contract with him for his part in causing the collapse. Briefly in the catbird seat, legally speaking, Jack pressures ZaraCorp into recognizing his claim, and cuts them in as partners to help extract the wealth.

But there's another wrinkle to ZaraCorp's relationship with the planet Zarathustra. Their entire legal right to exploit the verdant Earth-like planet, the basis of the wealth they derive from extracting its resources, is based on being able to certify to the authorities on Earth that Zarathustra is home to no sentient species.

Then a small furry biped—trusting, appealing, and ridiculously cute—shows up at Jack's outback home. Followed by its family. As it dawns on Jack that despite their stature, these are people, he begins to suspect that ZaraCorp's claim to a planet's worth of wealth is very flimsy indeed…and that ZaraCorp may stop at nothing to eliminate the "fuzzys" before their existence becomes more widely known.
07

The Collapsing Empire (The Interdependency, #1)
The first novel of a new space-opera sequence set in an all-new universe by the Hugo Award-winning, New York Times-bestselling author of Redshirts and Old Man's War.

Our universe is ruled by physics and faster than light travel is not possible -- until the discovery of The Flow, an extra-dimensional field we can access at certain points in space-time that transport us to other worlds, around other stars.

Humanity flows away from Earth, into space, and in time forgets our home world and creates a new empire, the Interdependency, whose ethos requires that no one human outpost can survive without the others. It’s a hedge against interstellar war -- and a system of control for the rulers of the empire.

The Flow is eternal -- but it is not static. Just as a river changes course, The Flow changes as well, cutting off worlds from the rest of humanity. When it’s discovered that The Flow is moving, possibly cutting off all human worlds from faster than light travel forever, three individuals -- a scientist, a starship captain and the Empress of the Interdependency -- are in a race against time to discover what, if anything, can be salvaged from an interstellar empire on the brink of collapse.
08

The Human Division (Old Man's War, #5)
Following the events of The Last Colony, John Scalzi tells the story of the fight to maintain the unity of the human race.

The people of Earth now know that the human Colonial Union has kept them ignorant of the dangerous universe around them. For generations the CU had defended humanity against hostile aliens, deliberately keeping Earth an ignorant backwater and a source of military recruits. Now the CU's secrets are known to all. Other alien races have come on the scene and formed a new alliance—an alliance against the Colonial Union. And they've invited the people of Earth to join them. For a shaken and betrayed Earth, the choice isn't obvious or easy.

Against such possibilities, managing the survival of the Colonial Union won't be easy, either. It will take diplomatic finesse, political cunning…and a brilliant "B Team," centered on the resourceful Lieutenant Harry Wilson, that can be deployed to deal with the unpredictable and unexpected things the universe throws at you when you're struggling to preserve the unity of the human race.

Being published online from January to April 2013 as a three-month digital serial, The Human Division will appear as a full-length novel of the Old Man's War universe, plus—for the first time in print—the first tale of Lieutenant Harry Wilson, and a coda that wasn't part of the digital serialization.
09

Zoe's Tale (Old Man's War, #4)
How do you tell your part in the biggest tale in history?

I ask because it's what I have to do. I'm Zoe Boutin Perry: A colonist stranded on a deadly pioneer world. Holy icon to a race of aliens. A player (and a pawn) in a interstellar chess match to save humanity, or to see it fall. Witness to history. Friend. Daughter. Human. Seventeen years old.

Everyone on Earth knows the tale I am part of. But you don't know my tale: How I did what I did — how I did what I had to do — not just to stay alive but to keep you alive, too. All of you. I'm going to tell it to you now, the only way I know how: not straight but true, the whole thing, to try make you feel what I felt: the joy and terror and uncertainty, panic and wonder, despair and hope. Everything that happened, bringing us to Earth, and Earth out of its captivity. All through my eyes.

One day, not long from now, it becomes almost impossible to murder anyone - 999 times out of a thousand, anyone who is intentionally killed comes back. How? We don't know. But it changes everything: war, crime, daily life.
Tony Valdez is a Dispatcher - a licensed, bonded professional whose job is to humanely dispatch those whose circumstances put them in death's crosshairs, so they can have a second chance to avoid the reaper. But when a fellow Dispatcher and former friend is apparently kidnapped, Tony learns that there are some things that are worse than death and that some people are ready to do almost anything to avenge a supposed wrong.
It's a race against time for Valdez to find his friend before it's too late...before not even a Dispatcher can save him.


___
Zachary Quinto - best known for his role as the Nimoy-approved Spock in the recent Star Trek reboot and the menacing, power-stealing serial killer, Sylar, in Heroes - brings his well-earned sci-fi credentials and simmering intensity to this audio-exclusive novella from master storyteller John Scalzi.