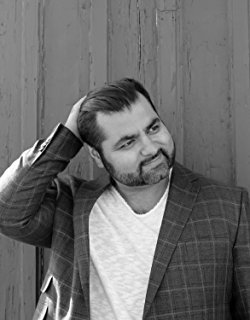 Victor Methos is the Edgar Award nominated bestselling author of over forty novels. He has been a criminal and civil rights lawyer in the Mountain West, conducting over 100 trials, and produces two books a year with his dog Fraiser by his side.

Victor Methos is the author of books: The Neon Lawyer, A Killer's Wife (Desert Plains, #1), An Invisible Client, Mercy, A Gambler's Jury, The Shotgun Lawyer, The Hallows, Chains of Darkness, Walk in Darkness, Sin City Homicide

The Neon Lawyer
With money and hope in short supply, newly minted attorney Brigham Theodore decides it’s time to lower his standards. He joins a seedy fly-by-night firm in Salt Lake City out of desperation. After he loses his first case—a speeding ticket—he’s convinced his career is over. But to his shock, his boss hands him a slightly more complex case: capital murder.

Brigham’s new client is Amanda Pierce, a lost, exhausted woman who gunned down the man who tortured and killed her six-year-old daughter. A jury may prove sympathetic to her unbearable pain, but the law is no fan of vigilante justice—and neither is Vince Dale, the slick and powerful prosecutor who’s never lost a murder case. There’s no question that Amanda pulled the trigger—she did it in front of five witnesses. If she pleads guilty, she will avoid a death sentence, but saving her life this way comes with an admission that what she did was wrong. However, if she refuses the “guilty” label, Brigham will have no choice but to fight for his career—and Amanda’s life.
02

A Killer's Wife (Desert Plains, #1)
From the bestselling author of The Neon Lawyer comes a gripping thriller about a prosecutor confronted with the darkest part of her past and the worst fears for her future…

Fourteen years ago, prosecutor Jessica Yardley’s husband went to prison for a series of brutal murders. She’s finally created a life with her daughter and is a well-respected attorney. She’s moving on. But when a new rash of homicides has her ex-husband, Eddie, written all over them—the nightmares of her past come back to life.

The FBI asks Jessica to get involved in the hunt for this copycat killer—which means visiting her ex and collaborating with the man who tore her life apart.

As the copycat’s motives become clearer, the new life Jessica created for herself gets darker. She must ask herself who she can trust and if she’s capable of stopping the killer—a man whose every crime is a bloody valentine from a twisted mastermind she’s afraid she may never escape.
03

An Invisible Client
For high-powered personal injury attorney Noah Byron, the good things in life come with a price tag—cars, houses, women. That’s why he represents only cases that come with the possibility of a nice cut of the action. But as a favor to his ex-wife, he meets with the mother of twelve-year-old Joel, a boy poisoned by tainted children’s medicine. While the official story is that a psycho tampered with bottles, the boy’s mother believes something much more sinister is at work…and the trail leads right back to the pharmaceutical company.

As Noah digs deeper into the case, he quickly finds himself up against a powerful corporation that will protect itself at any cost. He also befriends young Joel and breaks the number one rule of personal injury law: don’t make it personal. Faced with the most menacing of opponents and the most vulnerable of clients, Noah is determined to discover the truth and win justice for Joel—even if it means losing everything else.
04

Mercy
Brigham Theodore is a courtroom brawler, a criminal defense attorney who spends his time slugging it out with the government in court. A year after winning his biggest case, he finds himself at a new firm defending clients of every kind. Drug dealers, gangsters, con men and thugs are the people he defends every day. For him, the fight is what matters.

As the new hotshot lawyer in town, Brigham is referred an engineer accused of euthanizing his wife who was dying of pancreatic cancer. Brigham believes the case to be an easy one, a plea deal down the line for a sympathetic husband. But Vince Dale, once the prosecutor on Brigham's biggest case and now the County Attorney, remembers the sting of defeat and refuses to make a plea bargain on the case. With nothing left to lose, Brigham must use every ounce of fight he has in him to defend a man who has the full weight of the government pressing down on him, and who might not survive it.
05

A Gambler's Jury
What they’re doing to her client is a crime.

Attorney Dani Rollins is bullish in the courtroom—pushing judges and prosecutors to their limits in defense of the innocent. So when she meets Teddy Thorne, a mentally challenged teen accused of selling drugs, Dani knows she’s got this in the bag. She can easily settle the case with a couple of court appearances. But when prosecutors move for an adult felony conviction, Dani suspects Teddy’s being used as a pawn in a sinister game.

As the case moves forward, Dani is certain the judge and district attorney’s office have motivations beyond the crime—a fair trial isn’t in the cards. And when she takes on guardianship of Teddy, the case becomes personal as she fights her own demons and the government. Dani will stop at nothing to protect this innocent boy—there’s no other option. Because if she loses, both she and Teddy could lose far more than just the case…
06

The Shotgun Lawyer
From the bestselling author of The Neon Lawyer comes a page-turning thriller about a scrappy lawyer and his fight for justice.

Personal injury attorney Peter Game has a reputation: cynical, untroubled by ethics, and willing to take any case, anytime, in his pursuit of the win. He dreams of a sweetheart score that’ll make his name and net him millions. Then comes the lightning rod: a school shooting just outside of Salt Lake City. His client: the devastated mother of one of the victims.

What she wants is understandable—just not simple: to sue the manufacturers of the automatic weapon used in the mass killing. Game’s opponent, brilliant lawyer Brennen Garvin, is the least of his problems: the entire legal system, influenced by decades of pressure from powerful gun lobbies, is stacked against him.

For Game, this is the case of a lifetime. He’s just not sure his trademark rules will work in his favor. And he’s not sure he wants them to. As Game’s lust for victory gives way to a hunger for justice, he could lose everything—or win back his soul.
07

The Hallows
A ruthless lawyer cross-examines his life after a guilty client walks free in this sharp legal thriller from the bestselling author of The Neon Lawyer.

Ruthless defense attorney Tatum Graham has been living large in Miami, but when his recently acquitted client claims another victim, Tatum has a crisis of conscience. Disillusioned, he heads to his small Utah hometown for a simpler life…but that’s not what he finds.

Soon after he arrives, Tatum’s childhood crush offers him a job at the county attorney’s office and assigns him a murder case. The victim is a teenage girl not unlike the victim in the last case he tried. Now a prosecutor, Tatum sees a chance for redemption, but politics, corruption, and a killer defense threaten to thwart justice.

To complicate matters, Tatum’s estranged father has terminal cancer, and the time to reconcile is running out. Tatum moved to Utah to find clarity, but his thoughts swirl with old feelings and present dangers. As the case heats up, so does the risk, threatening to adjourn Tatum’s new life before it begins.
08

Chains of Darkness
The Most Vicious Murder in a City's History. . .

A killer stalks the city of San Diego, brutally slaying women on the fringes of society. The body of a young woman torn apart in her bedroom makes even the hardened detectives of the San Diego PD's Homicide Unit tremble with disgust and rage.

A Detective With a Troubled Past. . .

For SDPD homicide detective Jon Stanton, the young woman is more than just another case. His former partner, Eli Sherman, was the original detective assigned to the case; before he was discovered to be one of San Diego's most ruthless serial killers.

A Final Chance at Redemption. . .

Stanton was unable to see Eli Sherman for what he was and blames himself for the murders he committed while on the force. Near death, Stanton swears that he will never wear the badge again. But with a depraved killer eluding the best San Diego PD has to offer, he must once again fight to uncover a killer that leaves no evidence behind, and that has turned his attention to new prey. . .
09

Walk in Darkness
A Killer Hunts his Victims. . .

A sinister executioner in the grip of frenzy. Self-realized with a penchant for butchery, he finds pleasure in the vicious murders of those most vulnerable and calls himself, The Sandman.

A Detective Pulled Into a World he Thought he Left Behind. . .

It has been three years since Detective Jonathan Stanton solved the most brutal murder in San Diego's history, and as a result found himself in the middle of the worst police corruption scandal in memory. Choosing a less high-profile position, Stanton is nevertheless reluctantly dragged into the violent world of The Sandman.

The Sandman is clever, ruthless, and cautious. He leaves no evidence in his wake and takes a morbid interest in those that chase him. Believing Stanton to be his parallel, he finds an affinity for the detective. One that Stanton may not survive . . .
10

The rape-homicide of a prominent Las Vegas couple sends shock waves through the community. With no active leads, the LVPD Homicide Unit is growing desperate.

A DETECTIVE WITH A HISTORY OF VIOLENCE . . .

Brought in as a consultant, Detective Jon Stanton discovers that there's more to this case than anyone is revealing to him. The trail is leading him down a dark path, one that many in the Las Vegas Metro PD don't want him to uncover.

In a city full of moral decadence, Stanton combs the underbelly in search of a killer so brazen, he commits his crimes in full public view. Hindered at every turn by a police department unwilling to help him, Stanton is left alone to make a chilling discovery: the killer may be one of their own.