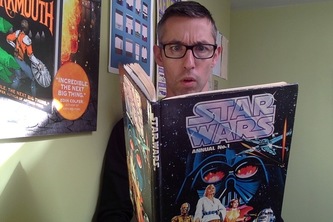 Author of Darkmouth series (HarperCollins), being adapted for film by Alcon Animation. Also writer of Boot (Hachette), published in May 2019. reader of sci-fi, YA, middle-grade, picture books, fantasy, history, science, comics... everything, really. Likes to dance while writing.

The Legends Begin (Darkmouth #1)
A monstrously funny debut from the new star of middle-grade adventure. Ages: 9+

There are towns where the border between our world and the world of monsters - properly called Legends - is thin. One of those towns is Darkmouth.

Except... he's a bit rubbish at it. And in a spectacularly unfortunate coincidence, the terrifying leader of the monsters is in the midst of planning an all out attack on earth... in Darkmouth.
02

Legend Hunter–in-training Finn may be clumsy and uncoordinated, but nothing will stop him from saving his dad, who is trapped in a land full of the monsters that have plagued Darkmouth for centuries. Now Finn will have to journey between worlds to rescue him from the Infested Side.

The action-packed sequel to Darkmouth #1: The Legends Begin is a hilarious adventure filled with beasts of the winged, fanged, and hungry variety—perfect for fans of How to Train Your Dragon and The Hero’s Guide to Saving Your Kingdom.
03

Beautifully illustrated throughout, Boot is a special book you will want to treasure and share.

When toy robot, Boot, wakes up at a scrapyard, it has no idea how it got there and why it isn't with its owner, Beth. It only has two and a half glitchy memories, but it knows it was loved, which means something important to humans.

Boot soon realises its emotions make it different to other robots, who just function and don't think. Boot is scared but tries to be brave, which is hard when its screen keeps showing a wobbly, worried face. Luckily Boot meets Noke and Red - other 'advanced' robots who have learned to survive in secret.

With its new friends by its side, Boot is determined to find Beth and the gang set off on a dangerous adventure. Everything Boot thought it knew about the world is changing and things aren't as simple as it remembers . . .

Boot is a story that will take you by surprise and make you think about the world around you.
05

The fourth book in the monstrously funny and action-packed Darkmouth series. It’s going to be legendary.

The Irish Times Book of the 1916 Rising
This heavily illustrated book focuses on the events of the 1916 Easter Rising in Ireland, rather than the background and the consequences. In a widely expanded version of the supplement that appeared in The Irish Times in March to commemorate the 90th Anniversary, The 1916 Rising recreates the actual course of events during that tumultuous week, based on contemporary witnesses, memoirs and later recollections. It adds up to the most comprehensive and accessible account of Easter Week in print.
07

Boot: The Rusty Rescue (Boot#2)
For fans of WALL-E and Toy Story, the second hilarious, heart-warming story about a small robot on a big adventure. With incredible illustrations by Ben Mantle.Toy robot Boot has come a long way since it woke up in a scrapyard with only two-and-a-half glitchy memories. It has a home with its robot pals in an abandoned amusement arcade, and has discovered what true happiness is - although, it's still not sure why humans are so leaky and weird ... But when Boot and the gang stumble upon Rusty, an old, broken robot, forgotten in the back of a testing lab, it's time to spring into action. Boot knows there's something special about Rusty, but can they free the old robot and help it find its purpose?A thrill-ride of an adventure, stuffed with fun, friendship, and a warehouse full of bouncy castles.
08

The Irish (and Other Foreigners)
He looks at what we think we know about the first Irish, where they came from and why they seem to have landed here long after they colonised our neighbours. He asks if the Celts ever landed in Ireland at all and could our genes reveal a twist to that story? The Vikings gave Ireland towns, a thriving slave trade, plenty of words and names. So how come they have left behind very little genetic trace? And how did a row over a woman lead to a band of down-on-their-luck cousins, from a French-Welsh-Norse background, to help conquer Ireland?

The Irish (& Other Foreigners) also tells the curious and bloody story of the Plantations, a mass movement of people which convulsed the island, as well as looking at how other newcomers left their mark on the island and its people. And finally, there is a chapter on the recent wave of immigration and how quickly a country of mass emigration became host to people from across the globe.
09