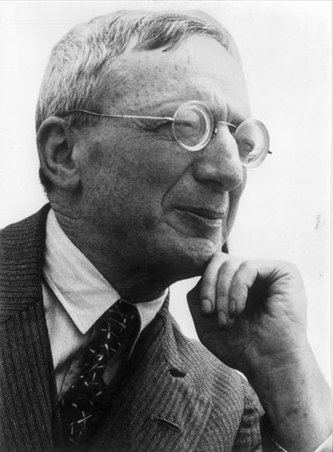 Bruno Alfred Döblin (August 10, 1878 – June 26, 1957) was a German novelist, essayist, and doctor, best known for his novel Berlin Alexanderplatz (1929). A prolific writer whose œuvre spans more than half a century and a wide variety of literary movements and styles, Döblin is one of the most important figures of German literary modernism. His complete works comprise over a dozen novels ranging in genre from historical novels to science fiction to novels about the modern metropolis; several dramas, radio plays, and screenplays; a true crime story; a travel account; two book-length philosophical treatises; scores of essays on politics, religion, art, and society; and numerous letters — his complete works, republished by Deutscher Taschenbuch Verlag and Fischer Verlag, span more than thirty volumes. His first published novel, Die drei Sprünge des Wang-lung (The Three Leaps of Wang Lun), appeared in 1915 and his final novel, Hamlet oder Die lange Nacht nimmt ein Ende (Tales of a Long Night) was published in 1956, one year before his death.

Bright Magic: Stories
Alfred Döblin’s many imposing novels, above all Berlin Alexanderplatz, have established him as one of the titans of modern German literature. This collection of his stories —astonishingly, the first ever to appear in English—shows him to have been a master of short fiction too.

Bright Magic includes all of Döblin’s first book, The Murder of a Buttercup, a work of savage brilliance and a landmark of literary expressionism, as well as two longer stories composed in the 1940s, when he lived in exile in Southern California. The early collection is full of mind-bending and sexually charged narratives, from the dizzying descent into madness that has made the title story one of the most anthologized of German stories to “She Who Helped,” where mortality roams the streets of nineteenth-­century Manhattan with a white borzoi and a quiet smile, and “The Ballerina and the Body,” which describes a terrible duel to the death. Of the two later stories, “Materialism, A Fable,” in which news of humanity’s soulless doctrines reaches the animals, elements, and the molecules themselves, is especially delightful.
04

A People Betrayed (November 1918, #2)
Set in Berlin after Germany's defeat in World War I, Doblin makes vividly real the public and private dramas of a nation on the brink of revolution. He brings to life a fascinating cast of characters that includes both the makers of history and the historically anonymous.
06

Karl and Rosa (November 1918, #4)
The second and third volumes of the November 1918 trilogy chronicle the end of Germany's 1918 revolution and the ensuing civil war that left the revolutionaries defeated on all sides.
08

The Three Leaps of Wang Lun
Here for the first time in English is Alfred Doblin's astonishing epic of eighteenth century China, hailed on its publication in 1915 as a master-piece of Expressionist prose, and since recognized to be the first modern German novel. The Three Leaps of Wang Lun is the story of a doomed sectarian rebellion during the reign of Emperor Ch'ien-lung (1736-1796). It is also the most sustained evocation, in any European language, of a China untouched by the West. Doblin's imagination, almost hallucinatory in its intensity, brings this China to vivid life. Teeming cities and Tibetan wastes, political intrigue and religious yearning, life at Court and the fate of wandering outcasts are depicted in a language of enormous vigour, unfolding the theme of meekness against force, a mystical sense of the world against the realities of power. This translation for the first time presents the whole work as Doblin wrote it. The inclusion of the Prologue, dropped from the first German edition and never replaced, restores a unity of structure and theme missing from previous editions. The Introduction places the novel in the context of Doblin's life and work, the Expressionist movement and the historical background, and discusses its theme and style.
09