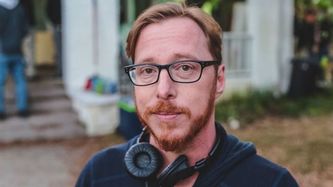 Blake Crouch is a bestselling novelist and screenwriter. He is the author of the forthcoming novel, Dark Matter, for which he is writing the screenplay for Sony Pictures. His international-bestselling Wayward Pines trilogy was adapted into a television series for FOX, executive produced by M. Night Shyamalan, that was Summer 2015’s #1 show. With Chad Hodge, Crouch also created Good Behavior, the TNT television show starring Michelle Dockery based on his Letty Dobesh novellas. He has written more than a dozen novels that have been translated into over thirty languages and his short fiction has appeared in numerous publications including Ellery Queen and Alfred Hitchcock Mystery Magazine. Crouch lives in Colorado with his family.

Dark Matter
Jason Dessen is walking home through the chilly Chicago streets one night, looking forward to a quiet evening in front of the fireplace with his wife, Daniela, and their son, Charlie—when his reality shatters.

'Are you happy in your life?'

Those are the last words Jason Dessen hears before the masked abductor knocks him unconscious. Before he awakes to find himself strapped to a gurney, surrounded by strangers in hazmat suits. Before the man he's never met smiles down at him and says, 'Welcome back.'

In this world he's woken up to, Jason's life is not the one he knows. His wife is not his wife. His son was never born. And Jason is not an ordinary college physics professor, but a celebrated genius who has achieved something remarkable. Something impossible.

Is it this world or the other that's the dream?

And even if the home he remembers is real, how can Jason possibly make it back to the family he loves? The answers lie in a journey more wondrous and horrifying than anything he could've imagined - one that will force him to confront the darkest parts of himself even as he battles a terrifying, seemingly unbeatable foe.
02

That’s what New York City cop Barry Sutton is learning as he investigates the devastating phenomenon the media has dubbed False Memory Syndrome—a mysterious affliction that drives its victims mad with memories of a life they never lived.

That's what neuroscientist Helena Smith believes. It’s why she’s dedicated her life to creating a technology that will let us preserve our most precious memories. If she succeeds, anyone will be able to re-experience a first kiss, the birth of a child, the final moment with a dying parent.

As Barry searches for the truth, he comes face-to-face with an opponent more terrifying than any disease—a force that attacks not just our minds but the very fabric of the past. And as its effects begin to unmake the world as we know it, only he and Helena, working together, will stand a chance at defeating it.

But how can they make a stand when reality itself is shifting and crumbling all around them?
03

Secret Service agent Ethan Burke arrived in Wayward Pines, Idaho, three weeks ago. In this town, people are told who to marry, where to live, where to work. Their children are taught that David Pilcher, the town’s creator, is god. No one is allowed to leave; even asking questions can get you killed.

But Ethan has discovered the astonishing secret of what lies beyond the electrified fence that surrounds Wayward Pines and protects it from the terrifying world beyond. It is a secret that has the entire population completely under the control of a madman and his army of followers, a secret that is about to come storming through the fence to wipe out this last, fragile remnant of humanity.
04

Pines (Wayward Pines, #1)
Wayward Pines, Idaho, is quintessential small-town America--or so it seems. Secret Service agent Ethan Burke arrives in search of two missing federal agents, yet soon is facing much more than he bargained for. After a violent accident lands him in the hospital, Ethan comes to with no ID and no cell phone. The medical staff seems friendly enough, but sometimes feels...off. As days pass, Ethan's investigation into his colleagues' disappearance turns up more questions than answers

WHY CAN'T HE MAKE CONTACT WITH HIS FAMILY IN THE OUTSIDE WORLD? WHY DOESN'T ANYONE BELIEVE HE IS WHO HE SAYS HE IS? AND WHAT'S THE PURPOSE OF THE ELECTRIFIED FENCES ENCIRCLING THE TOWN? ARE THEY KEEPING THE RESIDENTS IN? OR SOMETHING ELSE OUT?

Each step toward the truth takes Ethan further from the world he knows, until he must face a horrifying fact—he may never get out of Wayward Pines alive.....
05

Wayward (Wayward Pines #2)
Welcome to Wayward Pines, population 461. Nestled amidst picture-perfect mountains, the idyllic town is a modern-day Eden...except for the electrified fence and razor wire, snipers scoping everything 24/7, and the relentless surveillance tracking each word and gesture.
None of the residents know how they got here. They are told where to work, how to live, and who to marry. Some believe they are dead. Others think they’re trapped in an unfathomable experiment. Everyone secretly dreams of leaving, but those who dare face a terrifying surprise.

Ethan Burke has seen the world beyond. He’s sheriff, and one of the few who knows the truth—Wayward Pines isn’t just a town. And what lies on the other side of the fence is a nightmare beyond anyone’s imagining.
06

Run
For fans of Stephen King, Dean Koontz, and Thomas Harris, picture this: a landscape of American genocide...

5 D A Y S A G O
A rash of bizarre murders swept the country…
Senseless. Brutal. Seemingly unconnected.
A cop walked into a nursing home and unloaded his weapons on elderly and staff alike.
A mass of school shootings.
Prison riots of unprecedented brutality.
Mind-boggling acts of violence in every state.

T O N I G H T
They’re reading the names of those to be killed on the Emergency Broadcast System. You are listening over the battery-powered radio on your kitchen table, and they’ve just read yours.

Your name is Jack Colclough. You have a wife, a daughter, and a young son. You live in Albuquerque, New Mexico. People are coming to your house to kill you and your family. You don’t know why, but you don’t have time to think about that any more.

You only have time to….

This 80,000-word novel also contains a bonus interview with Blake, and excerpts from his other work.
07

Abandon
On Christmas Day in 1893, every man, woman, and child in a remote gold mining town disappeared, belongings forsaken, meals left to freeze in vacant cabins - and not a single bone was ever found. One hundred thirteen years later, two backcountry guides are hired by a history professor and his journalist daughter to lead them into the abandoned mining town, so they can learn what happened. With them is a psychic and a paranormal photographer, as the town is rumored to be haunted. A party that tried to explore the town years ago was never heard from again. What this crew is about to discover is that twenty miles from civilization, with a blizzard bearing down, they are not alone, and the past is very much alive.
08

Summer Frost
A video game developer becomes obsessed with a willful character in her new project, in a mind-bending exploration of what it means to be human by the New York Times bestselling author of Recursion.

Maxine was made to do one thing: die. Except the minor non-player character in the world Riley is building makes her own impossible decision—veering wildly off course and exploring the boundaries of the map. When the curious Riley extracts her code for closer examination, an emotional relationship develops between them. Soon Riley has all new plans for her spontaneous AI, including bringing Max into the real world. But what if Max has real-world plans of her own?

Blake Crouch’s Summer Frost is part of Forward, a collection of six stories of the near and far future from out-of-this-world authors. Each piece can be read or listened to in a single thought-provoking sitting.
09

Desert Places (Andrew Z. Thomas/Luther Kite, #1)
Novelist Andrew Thomas finds his peaceful life transformed into a nightmare by a mysterious killer who has framed him for the murder of a young woman whose body is buried on his property, covered in Andrew's blood, and who threatens to turn Andrew over to the police unless he does what his unknown adversary wants.
10

Snowbound
Catastrophe hits when Will and Devlin Innis lose their wife and mother one stormy night on a lonely desert highway. Will under suspicion, they flee. Suddenly a hard-edged FBI agent appears on their doorstep. “I know you’re innocent, because Rachael wasn’t the first ... or the last.”