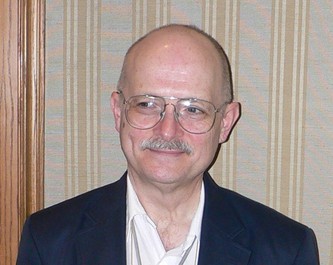 Vernor Steffen Vinge is a retired San Diego State University Professor of Mathematics, computer scientist, and science fiction author. He is best known for his Hugo Award-winning novels A Fire Upon The Deep (1992), A Deepness in the Sky (1999) and Rainbows End (2006), his Hugo Award-winning novellas Fast Times at Fairmont High (2002) and The Cookie Monster (2004), as well as for his 1993 essay "The Coming Technological Singularity", in which he argues that exponential growth in technology will reach a point beyond which we cannot even speculate about the consequences.

A Fire Upon the Deep (Zones of Thought, #1)
Alternate Cover Edition can be found here.

A Fire upon the Deep is the big, breakout book that fulfills the promise of Vinge's career to date: a gripping tale of galactic war told on a cosmic scale.

Thousands of years hence, many races inhabit a universe where a mind's potential is determined by its location in space, from superintelligent entities in the Transcend, to the limited minds of the Unthinking Depths, where only simple creatures and technology can function. Nobody knows what strange force partitioned space into these "regions of thought," but when the warring Straumli realm use an ancient Transcendent artifact as a weapon, they unwittingly unleash an awesome power that destroys thousands of worlds and enslaves all natural and artificial intelligence.

Fleeing the threat, a family of scientists, including two children, are taken captive by the Tines, an alien race with a harsh medieval culture, and used as pawns in a ruthless power struggle. A rescue mission, not entirely composed of humans, must rescue the children-and a secret that may save the rest of interstellar civilization.
02

A Deepness in the Sky (Zones of Thought, #2)
Alternative Cover Edition can be found here.

After thousands of years searching, humans stand on the verge of first contact with an alien race. Two human groups: the Qeng Ho, a culture of free traders, and the Emergents, a ruthless society based on the technological enslavement of minds.

The group that opens trade with the aliens will reap unimaginable riches. But first, both groups must wait at the aliens' very doorstep for their strange star to relight and for their planet to reawaken, as it does every two hundred and fifty years....

Then, following terrible treachery, the Qeng Ho must fight for their freedom and for the lives of the unsuspecting innocents on the planet below, while the aliens themselves play a role unsuspected by the Qeng Ho and Emergents alike.

More than just a great science fiction adventure, A Deepness in the Sky is a universal drama of courage, self-discovery, and the redemptive power of love.

Rainbows End
Robert Gu is a recovering Alzheimer's patient. The world that he remembers was much as we know it today. Now, as he regains his faculties through a cure developed during the years of his near-fatal decline, he discovers that the world has changed and so has his place in it. He was a world-renowned poet. Now he is seventy-five years old, though by a medical miracle he looks much younger, and he’s starting over, for the first time unsure of his poetic gifts. Living with his son’s family, he has no choice but to learn how to cope with a new information age in which the virtual and the real are a seamless continuum, layers of reality built on digital views seen by a single person or millions, depending on your choice. But the consensus reality of the digital world is available only if, like his thirteen-year-old granddaughter Miri, you know how to wear your wireless access—through nodes designed into smart clothes—and to see the digital context—through smart contact lenses.

With knowledge comes risk. When Robert begins to re-train at Fairmont High, learning with other older people what is second nature to Miri and other teens at school, he unwittingly becomes part of a wide-ranging conspiracy to use technology as a tool for world domination.

In a world where every computer chip has Homeland Security built-in, this conspiracy is something that baffles even the most sophisticated security analysts, including Robert’s son and daughter-in law, two top people in the U.S. military. And even Miri, in her attempts to protect her grandfather, may be entangled in the plot.

As Robert becomes more deeply involved in conspiracy, he is shocked to learn of a radical change planned for the UCSD Geisel Library; all the books there, and worldwide, would cease to physically exist. He and his fellow re-trainees feel compelled to join protests against the change. With forces around the world converging on San Diego, both the conspiracy and the protest climax in a spectacular moment as unique and satisfying as it is unexpected.
04

The Peace War (Across Realtime, #1)
The Peace War is quintessential hard-science adventure. The Peace Authority conquered the world with a weapon that never should have been a weapon--the "bobble," a spherical force-field impenetrable by any force known to mankind. Encasing governmental installations and military bases in bobbles, the Authority becomes virtually omnipotent. But they've never caught Paul Hoehler, the maverick who invented the technology, and who has been working quietly for decades to develop a way to defeat the Authority. With the help of an underground network of determined, independent scientists and a teenager who may be the apprentice genius he's needed for so long, he will shake the world, in the fast-paced hard-science thriller that garnered Vinge the first of his four Hugo nominations for best novel.
05

Marooned in Realtime (Across Realtime, #2)
Multiple Hugo Award winner Vernor Vinge takes readers on a fifty-million-year trip to a future where humanity's fate will be decided in a dangerous game of high-tech survival.

In this taut thriller, a Hugo finalist for Best Novel, nobody knows why there are only three hundred humans left alive on the Earth fifty million years from now. Opinion is fiercely divided on whether to settle in and plant the seed of mankind anew, or to continue using high-energy stasis fields, or "bobbles," in venturing into the future. When somebody is murdered, it's obvious someone has a secret he or she is willing to kill to preserve.The murder intensifies the rift between the two factions, threatening the survival of the human race. It's up to 21st century detective Wil Brierson, the only cop left in the world, to find the culprit, a diabolical fiend whose lust for power could cause the utter extinction of man.

Filled with excitement and adventure, Vinge's tense SF puzzler will satisfy readers with its sense of wonder and engaging characters, one of whom is a murderer with a unique modus operandi.
06

The Children of the Sky (Zones of Thought, #3)
After nearly twenty years, Vernor Vinge has produced an enthralling sequel to his memorable bestselling novel A Fire Upon the Deep.

Ten years have passed on Tines World, where Ravna Bergnsdot and a number of human children ended up after a disaster that nearly obliterated humankind throughout the galaxy. Ravna and the pack animals for which the planet is named have survived a war, and Ravna has saved more than one hundred children who were in cold-sleep aboard the vessel that brought them.

While there is peace among the Tines, there are those among them—and among the humans—who seek power… and no matter the cost, these malcontents are determined to overturn the fledgling civilization that has taken root since the humans landed.

On a world of fascinating wonders and terrifying dangers, Vernor Vinge has created a powerful novel of adventure and discovery that will entrance the many readers of A Fire Upon the Deep. Filled with the inventiveness, excitement, and human drama that have become hallmarks of his work, this new novel is sure to become another great milestone in Vinge’s already stellar career.
07

Across Realtime
"The intricately plotted progress of characters from near to farfuture... on an Earth which, like an abandon playground, has long ago been left behind by an evolving humanity... human-scale action within a vast canvas."
-- The Excyclopedia of Science Fiction.

Encompassing time-travel, powerful mystery and the future history of humanity to its last handful of survivors, Across Realtime spans millions of years and is an utterly engrossing SF classic.

"You can hardly turn the pages fast enough. As sheer entertainment, it's a winner"
-- Locus
08

True Names: and the Opening of the Cyberspace Frontier
Once in a great while a science fiction story is so visionary, yet so close to impending scientific developments that it becomes not only an accurate predictor, but itself the locus for new discoveries and development. True Names by Vernor Vinge, first published in 1981, is such a work.

Here is a feast of articles by computer scientists and journalists on the cutting edge of the field, writing about innovations and developments of the Internet, including, among others:

Timothy C. May: former chief scientist at Intel--a major insider in the field of computers and technology.

Mark Pesce: Cocreator of VRML and the author of the Playful World: How Technology Transforms Our Imagination.

The Collected Stories of Vernor Vinge
Since his first published story, "Apartness," appeared in 1965, Vernor Vinge has forged a unique and awe-inspiring career in science fiction as his work has grown and matured. He is now one of the most celebrated science fiction writers in the field , having won the field's top award, the Hugo, for each of his last two novels.

Now, for the first time, this illustrious author gathers all his short fiction into a single volume. This collection is truly the definitive Vinge, capturing his visionary ideas at their very best. It also contains a never-before-published novella, one that represents precisely what this collection encapsulates--bold, unique, challenging science fictional ideas brought to vivid life with compelling storytelling.

Including such major pieces as "The Ungoverned" and "The Blabber," this sumptuous volume will satisfy any reader who loves the sense of wonder, and the excitement of great SF.

The volume collects Vinge's short fiction through 2001 (except "True Names", including Vinge's comments from the earlier two volumes.)

As a mud-spattered youngster, Tatja quickly realized she was different from the stone-age primitives with whom she grew up. Her insatiable curiosity and thirst for knowledge could not be quenched among them; she had to explore and learn more about the strange world she lived on.

She finds the bastion of all culture, arts, entertainment and history for the entire planet, the seven-hundred-year-old science fiction magazine Fantasie, which is produced entirely aboard a gargantuan floating vessel the size of a small city. But despite the printing presses, sail-powered vessels, and mind-expanding technology, Tatja is still dissatisfied. Rising through the ranks, she finds that the people on the enormous barge are just as unintelligent as the primitives she grew up with. But others have come to the planet who not only challenge her intelligence, but offer her a tantalizing opportunity to uncover answers to mysteries that have long plagued her.

But with opportunity comes risk. And if she acts unwisely, she could bring doom to the only world she knows.