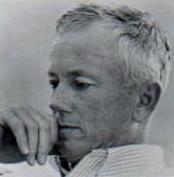 Lewis Elliott Chaze (November 15, 1915 – November 11, 1990) was an American war veteran, journalist, and novelist. After nearly half a century, his "long lost" 1953 noir classic Black Wings Has My Angel (originally issued as One For The Money), a legend among noir buffs, was reissued in 2005, sparking new interest in this talented and prolific author.
Elliott Chaze was born to Lewis and Sue Chaze in Mamou, Louisiana. In 1932, Chaze graduated from Bolton High School in Alexandria, Louisiana. He attended Tulane University, Washington and Lee University, and graduated from the University of Oklahoma in 1937.
Chaze began his journalism career as a reporter for the New Orleans Bureau of the Associated Press.[2] During World War II, he served as a paratrooper and technical sergeant in the 11th Airborne Division of the U.S. Army. After hostilities ended, Chaze continued to serve for a time in the Occupation of Japan.
After the war, Chaze rejoined the Associated Press (AP) in New Orleans, then transferred to the APs Denver Bureau. In 1951, Chaze moved to Mississippi, began working as a reporter and became an award-winning columnist for the Hattiesburg American newspaper in the city of Hattiesburg. While at the Hattiesburg American, Chase received the Hal Boyle Memorial Award for the best personal newspaper column.
Chaze was married to Mary Vincent Armstrong with whom he had five children.
Chaze became City Editor of the Hattiesburg American in 1970 and remained in that position through 1980. Chaze wrote articles, essays, and short stories for popular magazines of the time, including Collier's, Cosmopolitan, Life, Reader's Digest, Redbook, and The New Yorker.
Chaze's works of fiction reflected many of his own experiences and were praised by reviewers as being authentic and filled with local color. The Stainless Steel Kimono, published in 1947, was Chaze's first novel. His most controversial novel, Tiger in the Honeysuckle, dealt with the civil rights struggle of the 1960s. He continued writing well into the 1980's with a series of Southern crime novels set in a newspaper office, but it is the newfound cult hit status of his Black Wings Has My Angel from 1953 that has finally brought him the literary acclaim and fame he so richly deserves.
In an interview regarding his motivation for writing fiction, Chaze is reported to have responded: “Primarily I have a simple desire to shine my ass — to show off a bit in print.” During his career, Chaze produced at least ten novels that were published.

Black Wings Has My Angel
Chaze's long-lost noir classic, a legend among noir buffs, is back in print for the first time in nearly half a century. The one book Black Lizard never published, it's the dream-like tale of a man after a jailbreak, who meets up with the woman of his dreams... and his nightmares. Phenomenal work of the period, ranking with the best efforts of Thompson, Woolrich, Goodis et al.
02

Little David
"In 'Little David,' newsman Kiel St. James helps the local police track down a killer who has both a political grudge and a passion for biblical weaponry. Two members of the city council of Catherine, Alabama, are found slain in a bizarre fashion - by small stones, apparently fired from a slingshot. With no clues except the peculiar choice of weapon, Chief of Detectives Orson Boles gets nowhere fast He finally resorts to staging a slingshot contest as one of the events at the Catherine town picnic - a tactic ridiculed by St. James..."
05

The Stainless Steel Kimono
"They came, they saw, they conquered - girl after girl. The ribald, racy romp of seven wild and wacky paratroopers in occupied Japan."
07

Two Roofs and a Snake at The Door
"This is a book about Elliott Chaze, who is middle-aged, overweight and lives in a small American town, and his preoccupations, mainly a wife and 5 children."
10

One is a Lonely Number / Black Wings Has My Angel
Two pitch-black noirs from the early 1950's, the first one a story of an escaped con who gets tragically caught up in the lives of a small town, and the second one the story of destructive lovers who pull off an armored car heist with disastrous results. Includes new introductions by Ed Gorman and Bill Crider