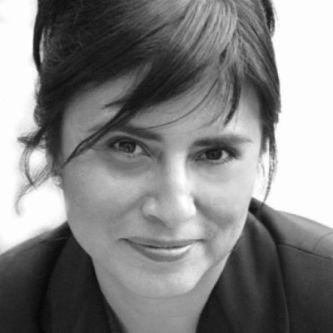 Named by Newsweek as "A Woman to Watch for in the New Century," Michele Serros is the author of Chicana Falsa and other stories of death, identity and Oxnard, How to be a Chicana Role Model, Honey Blonde Chica, and ¡Scandalosa!

A former staff writer for "The George Lopez Show," Serros has written for the Los Angeles Times, Ms. Magazine, Marie Claire, CosmoGirl, and The Washington Post and contributes satirical commentaries regularly for National Public Radio. An award-winning spoken word artist, she has read her poems to stadium crowds as a national touring "Road Poet" for Lollapalooza, recorded "Selected Stories from Chicana Falsa" for Mercury Records, and was selected by the Poetry Society of America to place her poetry on MTA buses throughout Los Angeles County.

Michele Serros is the author of books: Chicana Falsa, How to Be a Chicana Role Model, Honey Blonde Chica, ¡Scandalosa!, Chicana Falsa: And Other Stories of Death, Identity, and Oxnard, Antología De Poesía Chicana = Anthology Of Chicano Poetry, Chicana Falsa: Selected Stories, Wachale!: Poetry and Prose about Growing Up Latino in America, Play 411

Chicana Falsa
An award-winning Mexican-American poet presents her first collection of poetry and stories of Latina life in America.
02

How to Be a Chicana Role Model
03

Honey Blonde Chica
Evie Gomez is one chill chica. She and her best friend, Raquel, hang with the Flojos, a kick-back crew named for their designer flip-flops. And their habit of doing absolutely nothing. But the return of long-lost amiga mejor Dee Dee wrecks Evie and Raquel's Flojo flow. A few years in Mexico City have transformed their shy, skinny, brunette Dee Dee into a Sangro nightmare. Dee Dee has reinvented herself as "Dela," complete with tight designer threads, freaky blue contacts, and that signature blond hair. When Raquel wants precisely nada to do with the new Dela, Evie finds herself caught between two very different friends. At heart, is Evie a Cali-casual Flojo chick, or a sexy Sangro diva?
04

¡Scandalosa!
In this sassy sequel to Honey Blonde Chica, Evie finally has it all: a sweet boyfriend, two mejor amigas, and an upcoming sixteenera thats the talk of the school. Too bad reality has a way of ruining things.
05

Chicana Falsa: And Other Stories of Death, Identity, and Oxnard
From the white boy who transforms himself into a full-fledged Chicano, to the self-assured woman who effortlessly terrorizes her Anglo boss, to the junior-high friend who berated her "sloppy Spanish" and accused her of being a "Chicana Falsa," the people and places that Michele Serros brings to vivid life in this collection of poems and stories introduce a unique new viewpoint to the American literary landscape. Witty, tender, irreverent, and emotionally honest, her words speak to the painful and hilarious identity crises particular to the coming of age of an adolescent caught between two cultures.
06

Chicana Falsa: Selected Stories
As a Latina writer drawing on her own life experiences, much of her works gave voice to the complexities of lives straddling two worlds: working-class Mexican-American heritage and southern California pop culture. She described how she never quite fit in
08

Wachale!: Poetry and Prose about Growing Up Latino in America
This groundbreaking bilingual anthology, carefully designed for middle readers, is a mosaic of voices demonstrating the energy, creativity, and diversity of the fastest-growing minority group in America. Wachale! (Spanglish for “watch out!”) includes folk tales, stories, and poems in both English and Spanish, and brief autobiographical essays by both well-established and emerging writers representing all shades of Latinos, such as Chicanos in the Southwest, Puerto Ricans in New York, and Cubans in Florida, as well as Dominicans, Guatemalans, and other subgroups. Geared toward ten- to thirteen-year-olds, this is a window to Latino experiences north of the Rio Grande.
09