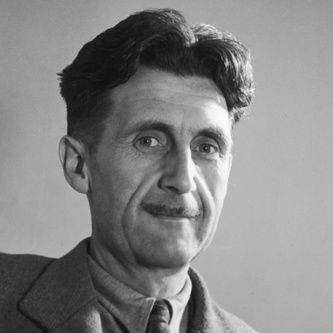 Eric Arthur Blair, better known by his pen name George Orwell, was an English author and journalist. His work is marked by keen intelligence and wit, a profound awareness of social injustice, an intense opposition to totalitarianism, a passion for clarity in language, and a belief in democratic socialism.

In addition to his literary career Orwell served as a police officer with the Indian Imperial Police in Burma from 1922-1927 and fought with the Republicans in the Spanish Civil War from 1936-1937. Orwell was severely wounded when he was shot through his throat. Later the organization that he had joined when he joined the Republican cause, The Workers Party of Marxist Unification (POUM), was painted by the pro-Soviet Communists as a Trotskyist organization (Trotsky was Joseph Stalin's enemy) and disbanded. Orwell and his wife were accused of "rabid Trotskyism" and tried in absentia in Barcelona, along with other leaders of the POUM, in 1938. However by then they had escaped from Spain and returned to England.

Between 1941 and 1943, Orwell worked on propaganda for the BBC. In 1943, he became literary editor of the Tribune, a weekly left-wing magazine. He was a prolific polemical journalist, article writer, literary critic, reviewer, poet, and writer of fiction, and, considered perhaps the twentieth century's best chronicler of English culture.

Orwell is best known for the dystopian novel Nineteen Eighty-Four (published in 1949) and the satirical novella Animal Farm (1945) — they have together sold more copies than any two books by any other twentieth-century author. His 1938 book Homage to Catalonia, an account of his experiences as a volunteer on the Republican side during the Spanish Civil War, together with numerous essays on politics, literature, language, and culture, have been widely acclaimed.

Orwell's influence on contemporary culture, popular and political, continues decades after his death. Several of his neologisms, along with the term "Orwellian" — now a byword for any oppressive or manipulative social phenomenon opposed to a free society — have entered the vernacular.

George Orwell is the author of books: 1984, Animal Farm, Animal Farm / 1984, Down and Out in Paris and London, Homage to Catalonia, Burmese Days, Keep the Aspidistra Flying, The Road to Wigan Pier, 1984, Coming Up for Air

1984
Among the seminal texts of the 20th century, Nineteen Eighty-Four is a rare work that grows more haunting as its futuristic purgatory becomes more real. Published in 1949, the book offers political satirist George Orwell's nightmarish vision of a totalitarian, bureaucratic world and one poor stiff's attempt to find individuality. The brilliance of the novel is Orwell's prescience of modern life—the ubiquity of television, the distortion of the language—and his ability to construct such a thorough version of hell. Required reading for students since it was published, it ranks among the most terrifying novels ever written.
02

Animal Farm
Librarian's note: There is an Alternate Cover Edition for this edition of this book here.

A farm is taken over by its overworked, mistreated animals. With flaming idealism and stirring slogans, they set out to create a paradise of progress, justice, and equality. Thus the stage is set for one of the most telling satiric fables ever penned –a razor-edged fairy tale for grown-ups that records the evolution from revolution against tyranny to a totalitarianism just as terrible.
When Animal Farm was first published, Stalinist Russia was seen as its target. Today it is devastatingly clear that wherever and whenever freedom is attacked, under whatever banner, the cutting clarity and savage comedy of George Orwell’s masterpiece have a meaning and message still ferociously fresh.
03

In 1984, London is a grim city where Big Brother is always watching you and the Thought Police can practically read your mind.  Winston Smith joins a secret revolutionary organization called The Brotherhood, dedicated to the destruction of the Party. Together with his beloved Julia, he hazards his life in a deadly match against the powers that be.

Animal Farm is Orwell's classic satire of the Russian Revolution -- an account of the bold struggle, initiated by the animals, that transforms Mr. Jones's Manor Farm into Animal Farm--a wholly democratic society built on the credo that All Animals Are Created Equal. But are they?
04

Down and Out in Paris and London
This unusual fictional memoir - in good part autobiographical - narrates without self-pity and often with humor the adventures of a penniless British writer among the down-and-outs of two great cities. The Parisian episode is fascinating for its expose of the kitchens of posh French restaurants, where the narrator works at the bottom of the culinary echelon as dishwasher, or plongeur. In London, while waiting for a job, he experiences the world of tramps, street people, and free lodging houses. In the tales of both cities we learn some sobering Orwellian truths about poverty and of society.
05

Homage to Catalonia
In 1936 George Orwell travelled to Spain to report on the Civil War and instead joined the fight against the Fascists. This famous account describes the war and Orwell’s own experiences. Introduction by Lionel Trilling.
06

Burmese Days
Set in the days of the Empire, with the British ruling in Burma, Orwell's book describes corruption and imperial bigotry. Flory, a white timber merchant, befriends Dr Veraswami, a black enthusiast for the Empire, whose downfall can only be prevented by membership at an all-white club.
07

Keep the Aspidistra Flying
London, 1936. Gordon Comstock has declared war on the money god; and Gordon is losing the war. Nearly 30 and "rather moth-eaten already," a poet whose one small book of verse has fallen "flatter than any pancake," Gordon has given up a "good" job and gone to work in a bookshop at half his former salary. Always broke, but too proud to accept charity, he rarely sees his few friends and cannot get the virginal Rosemary to bed because (or so he believes), "If you have no money ... women won't love you." On the windowsill of Gordon's shabby rooming-house room is a sickly but unkillable aspidistra--a plant he abhors as the banner of the sort of "mingy, lower-middle-class decency" he is fleeing in his downward flight.

In Keep the Aspidistra Flying, George Orwell has created a darkly compassionate satire to which anyone who has ever been oppressed by the lack of brass, or by the need to make it, will all too easily relate. He etches the ugly insanity of what Gordon calls "the money-world" in unflinching detail, but the satire has a second edge, too, and Gordon himself is scarcely heroic. In the course of his misadventures, we become grindingly aware that his radical solution to the problem of the money-world is no solution at all--that in his desperate reaction against a monstrous system, he has become something of a monster himself.

Orwell keeps both of his edges sharp to the very end--a "happy" ending that poses tough questions about just how happy it really is. That the book itself is not sour, but constantly fresh and frequently funny, is the result of Orwell's steady, unsentimental attention to the telling detail; his dry, quiet humor; his fascination with both the follies and the excellences of his characters; and his courageous refusal to embrace the comforts of any easy answer.
08

The Road to Wigan Pier
A searing account of George Orwell’s experiences of working-class life in the bleak industrial heartlands of Yorkshire and Lancashire, The Road to Wigan Pier is a brilliant and bitter polemic that has lost none of its political impact over time. His graphically unforgettable descriptions of social injustice, slum housing, mining conditions, squalor, hunger and growing unemployment are written with unblinking honesty, fury and great humanity.
09

Winston Smith lives in a society where the government controls people every second of the day. He fights this world with love. But it's dangerous: love for another person can be punished by death - and Big Brother is always watching.

Orwell's classic story shows that there is no freedom unless ideas and beliefs can be questioned. This is as true today as when it was written, more than fifty years ago.
10

Coming Up for Air
George Bowling, the hero of Orwell's comic novel, is a middle-aged insurance salesman who lives in an average English suburban row house with a wife and two children. One day, after winning some money from a bet, he goes back to the village where he grew up, to fish for carp in a pool he remembers from thirty years before. The pool, alas, is gone, the village has changed beyond recognition, and the principal event of his holiday is an accidental bombing by the RAF.