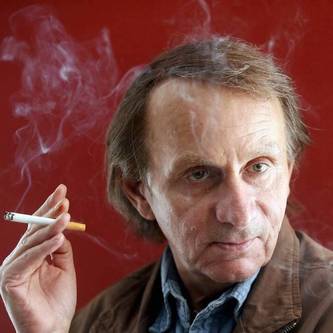 Michel Houellebecq (born Michel Thomas), born 26 February 1958 (birth certificate) or 1956 on the French island of Réunion, is a controversial and award-winning French novelist. To admirers he is a writer in the tradition of literary provocation that reaches back to the Marquis de Sade and Baudelaire; to detractors he is a peddler, who writes vulgar sleazy literature to shock. His works though, particularly Atomised, have received high praise from the French literary intelligentsia, with generally positive international critical response, Having written poetry and a biography of the horror writer H. P. Lovecraft, he brought out his first novel Extension du domaine de la lutte in 1994. Les particules élémentaires followed in 1998 and Plateforme, in 2001. After a disastrous publicity tour for this book, which led to his being taken to court for inciting racial hatred, he went to Ireland to write. He currently resides in France, where he has been described as "France’s biggest literary export and, some say, greatest living writer". In 2010 he published La Carte et le Territoire (published the same year in English as The Map and the Territory) which won the prestigious Prix Goncourt; and, in 2015, Submission.

Michel Houellebecq is the author of books: The Elementary Particles, Platform, Soumission, The Possibility of an Island, La carte et le territoire, Whatever, Serotonin, Lanzarote, H.P. Lovecraft: Against the World, Against Life, Public Enemies: Dueling Writers Take On Each Other and the World

An international bestseller and controversial literary phenomenon that drew immediate comparison to the novels of Beckett, Huxley, and Camus, this is the story of two half-brothers abandoned by a mother who gave herself fully to the drugged-out free-love world of the sixties.

Bruno, overweight and a failure at everything, is himself a raucously promiscuous hedonist, while Michel, his younger brother, is an emotionally dead molecular biologist wholly immersed in the solitude of his work. Each is ultimately offered a final chance at genuine love, and what unfolds is an endlessly unpredictable and provocative tale that speaks to the impossible redemption of the human condition.
02

In his early forties, Michel Renault skims through his days with as little human contact as possible. But following his father’s death he takes a group holiday to Thailand where he meets a travel agent—the shyly compelling Valérie—who begins to bring this half-dead man to life with sex of escalating intensity and audacity. Arcing with dreamlike swiftness from Paris to Pattaya Beach and from sex clubs to a terrorist massacre, Platform is a brilliant, apocalyptic masterpiece by a man who is widely regarded as one of the world’s most original and daring writers.
03

The Possibility of an Island
A worldwide phenomenon and the most important French novelist since Albert Camus, Michel Houellebecq now delivers his magnum opus–a tale of our present circumstances told from the future, when humanity as we know it has vanished.

Surprisingly poignant, philosophically compelling, and occasionally laugh-out-loud funny, The Possibility of an Island is at once an indictment, an elegy, and a celebration of everything we have and are at risk of losing. It is a masterpiece from one of the world's most innovative writers.
05

Whatever
Just thirty, with a well-paid job, depression and no love life, the narrator and anti-hero par excellence of this grim, funny, and clever novel smokes four packs of cigarettes a day and writes weird animal stories in his spare time.

Houellebecq's debut novel is painfully realistic portrayal of the vanishing freedom of a world governed by science and by the empty rituals of daily life.
07

Lanzarote
Realising that his New Year is probably going to be a disaster, as usual, our narrator, on impulse, walks into a travel agency to book a week in the sun. Sensitive to his limited means and dislike of Muslim countries, the travel agent suggests an island full of 21st century hedonism, set in a bizarre lunar landscape - Lanzarote.

On Lanzarote, one can meet some fascinating human specimens, notably Pam and Barbara - 'non-exclusive' German lesbians - who can give rise to some interesting combinations. Will they succeed in seducing Rudi, the police inspector from Luxembourg, currently living in exile in Brussels? Or will he join the 'Azraelian' sect, as they prepare for humanity to be regenerated by extra-terrestrials? As for our narrator, will he consider his week's holiday on the island a success?
09

H.P. Lovecraft: Against the World, Against Life
In this prescient work, Michel Houellebecq focuses his considerable analytical skills on H. P. Lovecraft, the seminal, enigmatic horror writer of the early 20th century. Houellebecq’s insights into the craft of writing illuminate both Lovecraft and Houellebecq’s own work. The two are kindred spirits, sharing a uniquely dark worldview. But even as he outlines Lovecraft’s rejection of this loathsome world, it is Houellebecq’s adulation for the author that drives this work and makes it a love song, infusing the writing with an energy and passion not seen in Houellebecq’s other novels to date.
10

Public Enemies: Dueling Writers Take On Each Other and the World
The international publishing sensation is now available in the United States—two brilliant, controversial authors confront each other and their enemies in an unforgettable exchange of letters.

In one corner, Bernard-Henri Lévy, creator of the classic Barbarism with a Human Face, dismissed by the media as a wealthy, self-promoting, arrogant do-gooder. In the other, Michel Houellebecq, bestselling author of The Elementary Particles, widely derided as a sex-obsessed racist and misogynist. What began as a secret correspondence between bitter enemies evolved into a remarkable joint personal meditation by France’s premier literary and political live wires.  An instant international bestseller, Public Enemies has now been translated into English for all lovers of superb insights, scandalous opinions, and iconoclastic ideas.

In wicked, wide-ranging, and freewheeling letters, the two self-described “whipping boys” debate whether they crave disgrace or secretly have an insane desire to please. Lévy extols heroism in the face of tyranny; Houellebecq sees himself as one who would “fight little and badly.” Lévy says “life does not ‘live’” unless he can write; Houellebecq bemoans work as leaving him in such “a state of nervous exhaustion that it takes several bottles of alcohol to get out.” There are also touching and intimate exchanges on the existence of God and about their own families.

Dazzling, delightful, and provocative, Public Enemies is a death match between literary lions, remarkable men who find common ground, confident that, in the end (as Lévy puts it), “it is we who will come out on top.”