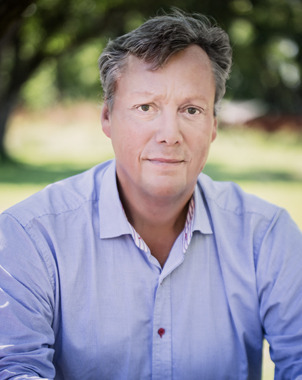 After a long career as a journalist, media consultant and television producer, Jonas Jonasson decided to start a new life. He wrote a manuscript, he sold all his possessions in Sweden and moved to a small town by Lake Lugano in Switzerland, only a few meters from the Italian border.

The manuscript became a novel. The novel became a phenomenon in Sweden, and now it is about to reach the rest of the world.

The 100-Year-Old Man Who Climbed Out the Window and Disappeared (The Hundred-Year-Old Man, #1)
After a long and eventful life, Allan Karlsson ends up in a nursing home, believing it to be his last stop. The only problem is that he’s still in good health. A big celebration is in the works for his 100th birthday, but Allan really isn’t interested (and he’d like a bit more control over his alcohol consumption), so he decides to escape. He climbs out the window in his slippers and embarks on a hilarious and entirely unexpected journey. It would be the adventure of a lifetime for anyone else, but Allan has a larger-than-life backstory: he has not only witnessed some of the most important events of the 20th century, but actually played a key role in them. Quirky and utterly unique, The 100-Year-Old Man Who Climbed Out the Window and Disappeared has charmed readers across the world.
02

The Girl Who Saved the King of Sweden
Just because the world ignores you, doesn’t mean you can’t save it . . .

Nombeko Mayeki was never meant to be a hero. Born in a Soweto shack, she seemed destined for a short, hard life. But now she is on the run from the world ‘s most ruthless secret service, with three Chinese sisters, twins who are officially one person and an elderly potato farmer. Oh, and the fate of the King of Sweden - and the world - rests on her shoulders.

As uproariously funny as Jonas Jonasson’s bestselling debut, this is an entrancing tale of luck, love and international relations.
03

Hitman Anders, recently out of prison, is doing small jobs for the big gangsters. Then his life takes an unexpected turn when he meets a female Protestant vicar (who also happens to be an atheist), and a homeless receptionist at a former brothel which is now a one-star hotel. The three join forces and concoct an unusual business plan based on Hitman Anders’ skills and his fearsome reputation. The vicar and receptionist will organize jobs for a group of gangsters, and will attract customers using the tabloids’ love of lurid headlines.

The perfect plan—if it weren’t for Hitman Anders’ curiosity about the meaning of it all. In conversations with the vicar, he turns to Jesus and, against all odds, Jesus answers him! The vicar can’t believe what’s happening. When Hitman Anders turns to religion, the lucrative business is in danger, and the vicar and the receptionist have to find a new plan, quick.

Fast-paced and sparky, the novel follows these bizarre but loveable characters on their quest to create a New Church, with all of Sweden’s gangsters hunting them. Along the way, it explores the consequences of fanaticism, the sensationalist press, the entrepreneurial spirit and straightforward human stupidity—and underlying all of it, the tenuous hope that it’s never too late to start again.
04

It all begins with a hot air balloon trip and three bottles of champagne. Allan and Julius are ready for some spectacular views, but they’re not expecting to land in the sea and be rescued by a North Korean ship, and they could never have imagined that the captain of the ship would be harbouring a suitcase full of contraband uranium, on a nuclear weapons mission for Kim Jong-un …

Soon Allan and Julius are at the centre of a complex diplomatic crisis involving world figures from the Swedish foreign minister to Angela Merkel and President Trump. Things are about to get very complicated …

Hit Man Anders
An ex-con discovers a fortune and undergoes some of the zaniest adventures this side of the Marx brothers.
09

Kötturinn sem týndi malinu sínu
What can a cat do when he's lost his purr?

Poor Bootle looks everywhere; the garden, the kitchen, even the goldfish bowl. It must be here somewhere.

Wonderful illustrations and a truly imaginative story make this the perfect picture book for cat lovers of all ages.