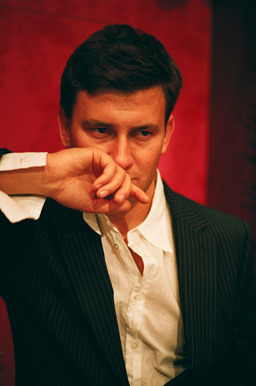 Dmitry Glukhovsky (Russian: Дмитрий Глуховский) is a professional Russian author and journalist. Glukhovsky started in 2002 by publishing his first novel, Metro 2033, on his own website to be viewed for free. The novel has later become an interactive experiment, drawing in many readers, and has since been made into a video game for the Xbox 360 console and PC. Glukhovsky is known in Russia for his novels Metro 2033 and "It's Getting Darker". He is also an author of a series of satirical "Stories of Motherland" criticizing today's Russia.
As a journalist, Dmitry Glukhovsky has worked for EuroNews TV in France, Deutsche Welle, and RT. In 2008-2009 he worked as a radio host of a Mayak Radio Station. He writes columns for Harper’s Bazaar, l’Officiel and Playboy.
He has lived in Israel, Germany and France and speaks English, French, German, Hebrew and Spanish as well as his native Russian.

Metro 2033 (Metro, #1)
The year is 2033. The world has been reduced to rubble. Humanity is nearly extinct. The half-destroyed cities have become uninhabitable through radiation. Beyond their boundaries, they say, lie endless burned-out deserts and the remains of splintered forests. Survivors still remember the past greatness of humankind. But the last remains of civilisation have already become a distant memory, the stuff of myth and legend.

More than 20 years have passed since the last plane took off from the earth. Rusted railways lead into emptiness. The ether is void and the airwaves echo to a soulless howling where previously the frequencies were full of news from Tokyo, New York, Buenos Aires. Man has handed over stewardship of the earth to new life-forms. Mutated by radiation, they are better adapted to the new world. Man's time is over.

A few score thousand survivors live on, not knowing whether they are the only ones left on earth. They live in the Moscow Metro - the biggest air-raid shelter ever built. It is humanity's last refuge. Stations have become mini-statelets, their people uniting around ideas, religions, water-filters - or the simple need to repulse an enemy incursion. It is a world without a tomorrow, with no room for dreams, plans, hopes. Feelings have given way to instinct - the most important of which is survival. Survival at any price. VDNKh is the northernmost inhabited station on its line. It was one of the Metro's best stations and still remains secure. But now a new and terrible threat has appeared.

Artyom, a young man living in VDNKh, is given the task of penetrating to the heart of the Metro, to the legendary Polis, to alert everyone to the awful danger and to get help. He holds the future of his native station in his hands, the whole Metro - and maybe the whole of humanity.
02

Metro 2034 (Metro, #2)
The long-awaited sequel to the cult bestseller Metro 2033, the second volume in the Metro trilogy, Metro 2034 continues the story of survival and struggle that unfolds in the mazes of the Moscow subway after WWIII. As the entire civilization was wiped out by atomic bombs and the surface of the planet is polluted with neclear fallout, the only place suitable for men to live are shelters and bunkers, the largest of which is the subway system of Moscow, aka the Metro.

The year is 2034. There's no hope for humans to return to the surface of Earth, to repopulate the forsaken cities, and to become once again the masters of the world they used to be. So they rebuild a strange and grotesque civilization in the tunnels and at the stations of the subway. Stations become city-states that wage trade and war on each other. A fragile equilibrium is established. And then all can be ruined in matter of days. A new horrible threat looms that can eradicate the remains of humanity and end our era. It would take three unlikely heroes to face this menace.

The basis of two bestselling computer games Metro 2033 and Metro Last Light, the Metro books have put Dmitry Glukhovsky in the vanguard of Russian speculative fiction. Metro 2034 tells a previously unknown part of the greater Metro saga that some only know from video games. Whether you're new to this series, are a fan of the first novel, or want to explore the world of Metro in depth, Metro 2034 is a perfect read for you! Featuring blistering action, vivid and tough characters, claustrophobic tension and dark satire the Metro books have become bestsellers across the world.
03

Metro 2035 (Metro, #3)
World War Three wiped out the humankind. The planet is empty now. Huge cities became dust and ashes. Railroads are being eaten by rust. Abandoned satellites hang lonely on the orbit. Radio is mute on all the frequencies.

The only survivors of the last war were those who made it into the gates of the Metro, the subway system of Moscow city. It’s there, hundreds of feet below the ground, in the vaults of what was constructed as the world’s largest air-raids shelter that people try to outlive the end of the days. It’s there that they created a new world for themselves.

The stations of Metro became city-states, and its citizens, torn apart by religions and ideologies are fighting for the now scarce commodities: air, water, and space. This tiny underground world can only remind humans of an immense world they once were the masters of.

It’s been twenty years past Doomsday, and yet the survivors refuse to give up. The most stubborn of them keep cherishing a dream: when the radiation level from nuclear bombings subsides, they will be able to return to the surface and have the life their parents once had.

But the most stubborn of the stubborn continues to search for other survivors in this huge emptiness that once was called Earth. His name is Artyom. He would give anything to lead his own people from the underground onto the surface.

What would I do for eternal life? Discoveries made within our lifetime will allow people to remain young forever. There is no more death. Our children will never die. Welcome to a world inhabited by people who are perfectly healthy, beautiful and eternally young. Every utopia has its shadowy backstreets. Someone has to make sure that overpopulation doesn't bring the wonderful world of the future crashing down. Someone has to make people forget their animal instincts and live in a fitting way for immortals. Maybe that someone is me?

The utopia "FUTU.RE" is the first novel after five years' silence from Dmitry Glukhovksy, author of the cult novel "METRO 2033." The author's books have been translated into dozens of foreign languages, selling in millions of copies, and have been adapted for the big screen in Hollywood - but none of them will grip you like "FUTU.RE"
05

The Gospel According to Artyom (Metro #1.5)
The recently created and previously unpublished epilogue of METRO 2033, written by Dmitry Glukhovsky.

This bonus piece was never published in English and comes exclusively on Amazon.com!


Note: This is a standalone epilogue that has nothing to do with the comic book


A new chapter that turns upside down the entire story of Metro 2033 and that promise a continuation to the breathtaking story of survival and struggle for a future set in the catacombs of the subway system in post-apocalyptic Moscow.

This epilogue is a link to the upcoming METRO: LAST LIGHT video game, to the yet untranslated METRO 2034 and to-be-written METRO 2035! An absolute must-read for all those who loved the book and the game!

The original story that inspired both the METRO 2033 and METRO: LAST LIGHT video games! An international bestseller, translated into 35 languages.

Set in the shattered subway of a post apocalyptic Moscow, Metro 2033 is a story of intensive underground survival where the fate of mankind rests in your hands.

In 2013 the world was devastated by an apocalyptic event, annihilating almost all mankind and turning the earth’s surface into a poisonous wasteland. A handful of survivors took refuge in the depths of the Moscow underground, and human civilization entered a new Dark Age.

The year is 2033. An entire generation has been born and raised underground, and their besieged Metro Station-Cities struggle for survival, with each other, and the mutant horrors that await outside.

Artyom was born in the last days before the fire. Having never ventured beyond his Metro Station-City limits, one fateful event sparks a desperate mission to the heart of the Metro system, to warn the remnants of mankind of a terrible impending threat. His journey takes him from the forgotten catacombs beneath the subway to the desolate wastelands above, where his actions will determine the fate of mankind.
09

The Prologue to the Postnuclear Dystopia (Metro #0.5)
The prologue to the fresh legend of European post-apocalyptic sci-fi, METRO 2033.

This book inspired a score of video games, including the upcoming METRO: LAST LIGHT, gave birth to a series of novels written by followers across the world and will soon be turned into a Hollywood movie!

Meet the legend for free. Welcome to the last refuge of the mankind after the end of the world. Enter the subway of Moscow...

* this piece is a free prologue to the novel.
10