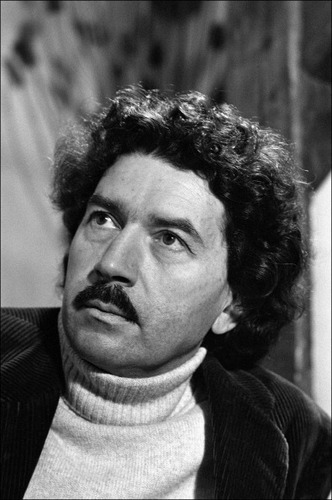 Alain Robbe-Grillet was a French writer and filmmaker. He was along with Nathalie Sarraute, Michel Butor and Claude Simon one of the figures most associated with the trend of the Nouveau Roman. Robbe-Grillet was elected a member of the Académie française on March 25, 2004, succeeding Maurice Rheims at seat #32.

He was married to Catherine Robbe-Grillet (née Rstakian) .

Alain Robbe-Grillet was born in Brest (Finistère, France) into a family of engineers and scientists. He was trained as an agricultural engineer. In the years 1943-44 Robbe-Grillet participated in service du travail obligatoire in Nuremberg where he worked as a machinist. The initial few months were seen by Robbe-Grillet as something of a holiday, since in between the very rudimentary training he was given to operate the machinery he had free time to go to the theatre and the opera. In 1945, Robbe-Grillet completed his diploma at the National Institute of Agronomy. Later, his work as an agronomist took him to Martinique, French Guinea,Guadeloupe and Morocco.

His first novel The Erasers (Les Gommes) was published in 1953, after which he dedicated himself full-time to his new occupation. His early work was praised by eminent critics such as Roland Barthes and Maurice Blanchot. Around the time of his second novel he became a literary advisor for Les Editions de Minuit and occupied this position from 1955 until 1985. After publishing four novels, in 1961 he worked with Alain Renais, writing the script for Last Year at Marienbad (L'Année Dernière à Marienbad), and subsequently wrote and directed his own films. In 1963, Robbe-Grillet published For a New Novel (Pour un Nouveau Roman), a collection of previous published theoretical writings concerning the novel. From 1966 to 1968 he was a member of the High Committee for the Defense and Expansion of French (Haut comité pour la défense et l´expansion de la langue française). In addition Robbe-Grillet also led the Centre for Sociology of Literature (Centre de sociologie de la littérature) at the university of Bruxelles from 1980 to 1988. From 1971 to 1995 Robbe-Grillet was a professor at New York University, lecturing on his own novels.

In 2004 Robbe-Grillet was elected to the Académie française, but was never actually formally received by the Académie because of disputes regarding the Académie's reception procedures. Robbe-Grillet both refused to prepare and submit a welcome speech in advance, preferring to improvise his speech, as well as refusing to purchase and wear the Académie's famous green tails (habit vert) and sabre, which he considered as out-dated.

He died in Caen after succumbing to heart problems

His writing style has been described as "realist" or "phenomenological" (in the Heideggerian sense) or "a theory of pure surface." Methodical, geometric, and often repetitive descriptions of objects replace the psychology and interiority of the character. Instead, one slowly pieces together the story and the emotional experience of jealousy in the repetition of descriptions, the attention to odd details, and the breaks in repetitions. Ironically, this method resembles the experience of psychoanalysis in which the deeper unconscious meanings are contained in the flow and disruptions of free associations. Timelines and plots are fractured and the resulting novel resembles the literary equivalent of a cubist painting. Yet his work is ultimately characterised by its ability to mean many things to many different people[2].

Robbe-Grillet wrote his first novel A Regicide (Un Régicide) in 1949, but it was rejected by Gallimard, a major French publishing house, and only later published with 'minor corrections' by his life-long publisher Les Editions de Minuit in 1978. His fi

Alain Robbe-Grillet is the author of books: Jealousy, The Erasers, Le Voyeur, Jealousy & In the Labyrinth, For a New Novel: Essays on Fiction, In the Labyrinth, Djinn, Last Year at Marienbad: Text for the Film by Alain Resnais, Project for a Revolution in New York, Repetition

Jealousy
'Jealousy' tells of a jealous husband whose suspicion of his wife and neighbors takes possession of his mind.
02

The Erasers
Alain Robbe-Grillet is internationally hailed as the chief spokesman for the noveau roman and one of the great novelists of the twentieth century. The Erasers, his first novel, reads like a detective story but is primarily concerned with weaving and then probing a complete mixture of fact and fantasy. The narrative spans the twenty-four-hour period following a series of eight murders in eight days, presumably the work of a terrorist group. After the ninth murder, the investigation is then turned over to a police agent, who may in fact be the assassin.

Both an engrossing mystery and a sinister deconstruction of reality, The Erasers intrigues and unnerves with equal force as it pull us along to its ominous conclusion.
03

Jealousy & In the Labyrinth
Here, in one volume, are two remarkable novels by the chief spokesman of the so-called “new novel” which has caused such discussion and aroused such controversy. “Jealousy,” said the New York Times Book Review “is a technical masterpiece, impeccably contrived.” “It is an exhilarating challenge,” said the San Francisco Chronicle.
05

For a New Novel: Essays on Fiction
Alain Robbe-Grillet, one of the leaders of the new French literary movement of the sixties, has long been regarded as the outstanding writer of the nouveau roman, as well as its major spokesman. For a New Novel reevaluates the techniques, ethos, and limits of contemporary fiction. This is a work of immense importance for any discussions of the history of the novel, and for contemporary thinking about the future of fiction.

In the Labyrinth
The Battle of Reichenfels has been fought and lost. The army is in flight. The enemy is expected to arrive in town at any moment. Wandering through the snow laden devastated streets of what once was a city, a soldier on the losing side has a parcel to deliver. All the streets look the same, and he cannot remember the name of the street where he was to meet the man who had agreed to take the parcel. But he must deliver the parcel or at least get rid of it.

Alain Robbe-Grillet says in his prefatory note: "this story is fiction, not a report. It describes a reality which is not necessarily that of the reader's own experience. And yet the reality here in question is strictly physical, that is to say it has no allegorical significance. The reader should therefore see in it only objects, the gestures, the words and the events that are told, without seeking to give them either more or less meaning than they would have in his own life, or in his death."

The masterful translation is by Christine Brooke-Rose.
07

Djinn
Djinn is the story of a young man who joins a clandestine organization under the command of an alluring, androgynous American girl named Djinn (or Jean). His search for the meaning of his mission and for possible clues to the identity of the mysterious Djinn, becomes a quest for his own identity in an ever-shifting time-space continuum.
08

Project for a Revolution in New York
Part prophecy and part erotic fantasy, this classic tale of otherworldly depravity features New York itself—or a foreigner's nightmare of New York—as its true protagonist. Set in the towers and tunnels of the quintessential American city, Alain Robbe-Grillet's novel turns this urban space into a maze where politics bleeds into perversion, revolution into sadism, activist into criminal, vice into art—and back again. Following the logic of a movie half-glimpsed through a haze of drugs and alcohol, Project for a Revolution in New York is a Sadean reverie that bears an alarming resemblance to the New York, and the United States, that have actually come into being.
10

Repetition
Reminiscent of Orson Welles's The Third Man, Repetition is an atmospheric spy novel of violence, mystery, and tricks of the eye, set in a bombed-out 1949 Berlin. Henri Robin, a special agent of the French secret service, arrives in the ruined city and feels linked to it by a vague and recurrent memory. There is a shooting, a kidnapping, druggings, encounters with pimps and teenage whores, police interrogations, even torture. Bits and pieces of the Oedipus story resonate through the book's elegant labyrinth as Robin slowly senses that he was in Berlin before - as a child, with his mother, perhaps looking for his father. A brilliantly executed novel in prose of an almost hallucinatory richness, Repetition is proof that Robbe-Grillet's vision is, in a time of identity theft and porous nationhood, more relevant than ever.