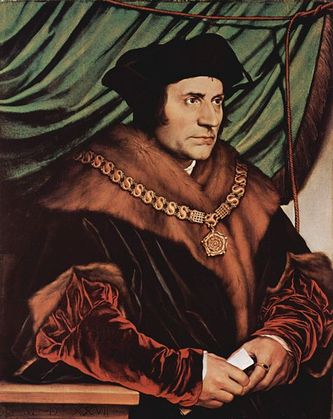 Sir Thomas More (/ˈmɔːr/; 7 February 1478 – 6 July 1535), venerated by Catholics as Saint Thomas More, was an English lawyer, social philosopher, author, statesman, and noted Renaissance humanist. He was a councillor to Henry VIII and also served as Lord High Chancellor of England from October 1529 to 16 May 1532.

More opposed the Protestant Reformation, in particular the theology of Martin Luther and William Tyndale. He also wrote Utopia, published in 1516, about the political system of an imaginary ideal island nation. More opposed the King's separation from the Catholic Church, refusing to acknowledge Henry as Supreme Head of the Church of England and the annulment of his marriage to Catherine of Aragon. After refusing to take the Oath of Supremacy, he was convicted of treason and beheaded.

Pope Pius XI canonised More in 1935 as a martyr. Pope John Paul II in 2000 declared him the "heavenly Patron of Statesmen and Politicians." Since 1980, the Church of England has remembered More liturgically as a Reformation martyr. The Soviet Union honoured him for the Communistic attitude toward property rights expressed in Utopia.

Thomas More is the author of books: Utopia, Three Early Modern Utopias: Utopia / New Atlantis / The Isle of Pines, Utopia with Erasmus's The Sileni of Alcibiades, The History of King Richard III, The Sadness of Christ and Final Prayers and Benedictions, A Dialogue of Comfort Against Tribulation, The Last Letters of Thomas More, The Four Last Things: The Supplication of Souls; A Dialogue on Conscience, Utopías del Renacimiento, Selected Writings

Utopia
Utopia (Libellus vere aureus, nec minus salutaris quam festivus, de optimo rei publicae statu deque nova insula Utopia) is a satirical work of fiction and political philosophy by Thomas More (1478–1535) published in 1516 in Latin. The book is a frame narrative primarily depicting a fictional island society as described by the character Raphael Hythloday who lived there some years, who describes and its religious, social and political customs.
02

Three Early Modern Utopias: Utopia / New Atlantis / The Isle of Pines
With the publication of Utopia (1516), Thomas More provided a scathing analysis of the shortcomings of his own society, a realistic suggestion for an alternative mode of social organization, and a satire on unrealistic idealism. Enormously influential, it remains a challenging as well as a playful text. This edition reprints Ralph Robinson's 1556 translation from More's original Latin together with letters and illustrations that accompanied early editions of Utopia.
This edition also includes two other, hitherto less accessible, utopian narratives. New Atlantis (1627) offers a fictional illustration of Francis Bacon's visionary ideal of the role that science should play in the modern society. Henry Neville's The Isle of Pines (1668), a precursor of Defoe's Robinson Crusoe, engages with some of the sexual, racial, and colonialist anxieties of the end of the early modern period. Bringing together these three New World texts, and situating them in a wider Renaissance context, this edition - which includes letters, maps, and alphabets that accompanied early editions - illustrates the diversity of the early modern utopian imagination, as well as the different purposes to which it could be put.
03

Utopia with Erasmus's The Sileni of Alcibiades
Sixteenth-century classic by brilliant humanist, churchman and scholar envisioned a patriarchal island kingdom that practiced religious tolerance, in which everybody worked, all goods were community-owned, and violence, bloodshed and vice were nonexistent. Forerunner of many later attempts at establishing "Utopias" both in theory and in practice.
04

The History of King Richard III
Richard III’s reputation stands as one of the most evil men in history—a manipulating and murderous man who would stop at nothing to become king. Much of what modern scholarship knows of him stems from Thomas More’s critical biography, which itself proved the inspiration for Shakespeare’s play.Focusing on the final years of Richard III’s life, Sir Thomas More depicts a man captivated and corrupted by the thrill of power—a man who twisted God’s laws to justify not only his ruthless ambitions, but his most heinous crime: the imprisonment and murder of his nephews, the true heirs to the throne. The History of King Richard III is a powerful portrayal of a monstrous ruler and a fascinating insight into the mind and motivations of its author. Scholar, politician, and one-time favorite of the Court of Henry VIII, Sir Thomas More is best known for his Utopia.
05

The Sadness of Christ and Final Prayers and Benedictions
Publication of this volume brings to conclusion the Yale Edition of the Complete Works of St. Thomas More, a thirty-year publishing project of landmark importance in the study of humanism in Western history. The volume contains More's earliest works, probably written between 1492 and 1522, including English poems, a translation and devotional adaptation of Giovanni Francesco Pico's life of his famous uncle Giovanni Pico della Mirandola, and a devotional prose work.
These texts together trace More's earliest career as a humanist through his transition to maturity as a defender of the faith.
The English poems (c. 1492-1494) are lively and experimental works, written at a time when English poetry was in its doldrums. This collection includes verses for a series of painted hangings in More's father's house, a lament for Queen Elizabeth, wife of Henry VII, traditional and sober Fortune verses, and a lively medieval comic poem, "A Merry Gest of a Sergeant and a Friar." "The Life of Pico" (c. 1510) is very likely More's earliest prose work and is his only extended translation of another writer's Latin into English. The translation is remarkable for its time, when sophisticated Latin was difficult to translate into more primitive English. "The Last Things" (c. 1522) is an incomplete prose work that re-creates the tradition of writing on death, judgment, hell, and heaven as objects of meditation.
With the publication of "St. Thomas More: Selected Poems," edited by Elizabeth F. Rogers (1961), the Yale University Press rated two new editions of the works of St. Thomas More. One is a complete scholarly edition in fourteen volumes; the other a modernized version of selected works in seven volumes. "St.Thomas More: Selected Letters "is the first volume in the Selected Works; "The History of King Richard III" is Volume 2 in the Complete Works. These editions, to be published over a period of ten years, are designed to serve as standard reference works for many decades to come. Sponsored by the Yale University Department of English and the Yale University Library, these editions mark a new era in the study of Renaissance literature, history, and religion.
06

A Dialogue of Comfort Against Tribulation
07

The Last Letters of Thomas More
Written from the Tower of London, these letters of Thomas More still speak powerfully today. The story of Thomas More, recently told in Peter Ackroyd's bestselling biography, is well known. In the spring of 1534, Thomas More was taken to the Tower of London, and after fourteen months in prison, the brilliant author of Utopia, friend of Erasmus and the humanities, and former Lord Chancellor of England was beheaded on Tower Hill. Yet More wrote some of his best works as a prisoner, including a set of historically and religiously important letters. The Last Letters of Thomas More is a superb new edition of More's prison correspondence, introduced and fully annotated for contemporary readers by Alvaro de Silva. Based on the critical edition of More's correspondence, this volume begins with letters penned by More to Cromwell and Henry VIII in February 1534 and ends with More's last words to his daughter, Margaret Roper, on the eve of his execution. More writes on a host of topics-prayer and penance, the right use of riches and power, the joys of heaven, psychological depression and suicidal temptations, the moral compromises of those who imprisoned him, and much more. This volume not only records the clarity of More's conscience and his readiness to die for the integrity of his religious faith, but it also throws light on the literary works that More wrote during the same period and on the religious and political conditions of Tudor England.
08

The Four Last Things: The Supplication of Souls; A Dialogue on Conscience
09

Selected Writings
Thomas More is perhaps most familiar to us from his courageous struggle with Henry VIII, unforgettably portrayed in Robert Bolt’s classic, A Man for All Seasons. But that final struggle, which ended in his execution for treason, was only the crowning act in a life that he had devoted to God long before.

In the first selection in decades made for the general reader from his collected works, this volume traces More’s journey of moral conviction in his own words and writings. Drawing on a variety of More’s late writings–the extraordinary “Tower Works,” written in prison, his poignant last letters to his daughter Margaret, and his poems, private prayers and devotional works–this collection will provide even readers lacking a background in Renaissance humanism or history with a rich introduction to a startlingly modern man of spiritual principle. Also included is the famous “Life of Sir Thomas More,” written by his son-in-law, William Roper.

In the annals of spirituality certain books stand out both for their historical importance and for their continued relevance. The Vintage Spiritual Classics series offers the greatest of these works in authoritative new editions, with specially commissioned essays by noted contemporary commentators. Filled with eloquence and fresh insight, encouragement and solace, Vintage Spiritual Classics are incomparable resources for all readers who seek a more substantive understanding of mankind's relation to the divine.