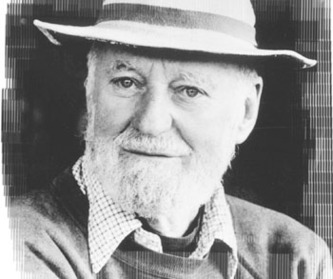 A prominent voice of the wide-open poetry movement that began in the 1950s, Lawrence Ferlinghetti has written poetry, translation, fiction, theater, art criticism, film narration, and essays. Often concerned with politics and social issues, Ferlinghetti’s poetry countered the literary elite's definition of art and the artist's role in the world. Though imbued with the commonplace, his poetry cannot be simply described as polemic or personal protest, for it stands on his craftsmanship, thematics, and grounding in tradition.

Ferlinghetti was born in Yonkers in 1919, son of Carlo Ferlinghetti who was from the province of Brescia and Clemence Albertine Mendes-Monsanto. Following his undergraduate years at the University of North Carolina at Chapel Hill, he served in the U.S. Navy in World War II as a ship's commander. He received a Master’s degree from Columbia University in 1947 and a Doctorate de l’Université de Paris (Sorbonne) in 1950. From 1951 to 1953, when he settled in San Francisco, he taught French in an adult education program, painted, and wrote art criticism. In 1953, with Peter D. Martin, he founded City Lights Bookstore, the first all-paperbound bookshop in the country, and by 1955 he had launched the City Lights publishing house.

The bookstore has served for half a century as a meeting place for writers, artists, and intellectuals. City Lights Publishers began with the Pocket Poets Series, through which Ferlinghetti aimed to create an international, dissident ferment. His publication of Allen Ginsberg’s Howl & Other Poems in 1956 led to his arrest on obscenity charges, and the trial that followed drew national attention to the San Francisco Renaissance and Beat movement writers. (He was overwhelmingly supported by prestigious literary and academic figures, and was acquitted.) This landmark First Amendment case established a legal precedent for the publication of controversial work with redeeming social importance.

Ferlinghetti’s paintings have been shown at various galleries around the world, from the Butler Museum of American Painting to Il Palazzo delle Esposizioni in Rome. He has been associated with the international Fluxus movement through the Archivio Francesco Conz in Verona. He has toured Italy, giving poetry readings in Roma, Napoli, Bologna, Firenze, Milano, Verona, Brescia, Cagliari, Torino, Venezia, and Sicilia. He won the Premio Taormino in 1973, and since then has been awarded the Premio Camaiore, the Premio Flaiano, the Premio Cavour. among others. He is published in Italy by Oscar Mondadori, City Lights Italia, and Minimum Fax. He was instrumental in arranging extensive poetry tours in Italy produced by City Lights Italia in Firenze. He has translated from the Italian Pier Paolo Pasolin’s Poemi Romani, which is published by City Lights Books. In San Francisco, his work can regularly be seen at the George Krevsky Gallery at 77 Geary Street.

Ferlinghetti’s A Coney Island of the Mind continues to be the most popular poetry book in the U.S. It has been translated into nine languages, and there are nearly 1,000,000 copies in print. The author of poetry, plays, fiction, art criticism, and essays, he has a dozen books currently in print in the U.S., and his work has been translated in many countries and in many languages. His most recent books are A Far Rockaway of the Heart (1997), How to Paint Sunlight (2001), and Americus Book I (2004) published by New Directions.

Lawrence Ferlinghetti is the author of books: A Coney Island of the Mind: Poems, Pictures of the Gone World, Poetry as Insurgent Art, City Lights Pocket Poets Anthology, A Far Rockaway of the Heart, Her, Starting from San Francisco, These are My Rivers: New Selected Poems 1955-1993, Wild Dreams of a New Beginning, San Francisco Poems

A Coney Island of the Mind: Poems
The title of this book is taken from Henry Miller's "Into the Night Life" and expresses the way Lawrence Ferlinghetti felt about these poems when he wrote them during a short period in the 1950's—as if they were, taken together, a kind of Coney Island of the mind, a kind of circus of the soul.
02

Pictures of the Gone World
Published to celebrate forty years of City Lights publishing, which began with the letterpress printing of this book in 1955.

It was Lawrence Ferlinghetti's first book, and it has been reprinted twenty-one times, having never been out of print. The original edition contained the first twenty-seven poems to which the author has now added eighteen new verses.

Lawrence Ferlinghetti, poet and founder of City Lights Books, author of A Coney Island of the Mind and Pictures of the Gone World, among numerous other books, has been drawing from life since his student days in Paris where he frequented the Academie Julien and where he did his first oil painting.

Poetry as Insurgent Art
In 1953 Lawrence Ferlinghetti founded the first paperback bookstore in the United States. In over five decades City Lights, the bookstore and publisher, has become a Mecca for millions. Ferlinghetti’s A Coney Island of the Mind (ND, 1958) is a number one best-selling volume of poetry by any living American poet. Now, New Directions is proud to publish his manifesto in a paperback edition.
04

From the introduction by Lawrence Ferlinghetti:
“Even though some say that an avant-garde in literature no longer exists, the smaller independent publisher is itself still a true avant-garde, its place still out there, scouting the unknown . . . From the beginning, the aim was to publish across the board, avoiding the provincial and the academic . . . I had in mind rather an international, dissident, insurgent ferment . . .”

A Far Rockaway of the Heart
A sequence of one hundred and one poems with recurrent themes, it includes various sections on love, art, music, history, and literature, as well as confrontations with major figures in the avant-garde before the arrival of the Beat generation. This edition now includes eighteen new poems from Ferlinghetti's "Pictures of the Gone World" which he publishes under his City Lights imprint. A self-styled "stand-up tragedian," Ferlinghetti has been called "the foremost chronicler of our times." If A Coney Island of the Mind was a generations vibrant eye-opener, A Far Rockaway of the Heart is a wake-up call for a new age.
06

Her
"To all those who have for several years sought to discredit the new American literature, Lawrence Ferlinghetti has just dealt a most powerful blow," wrote French critic Pierre Lepape in 1961 when Her was published in France as La Quatrieme Personne du Singulier. Calling it "a masterpiece of the young American novel," Lepape declared it was "the confirmation of a great American writer who, in the hall of American literary glories, takes the place left vacant by the death of Hemingway." Lepape went on to speak of the "incredible verbal virtuosity" by which the reader is led through this "laby-reve," and it is this image of the "labyrinth-dream" which relates Her to the anti-novels of the young French school of Robbe-Grillet and Butor.


Being thus very far from the kind of novels produced by Ferlinghetti's immediate contemporaries (whether Beat or academic) this book has met with little but bafflement among American critics. With well over 50,000 now in print Her nevertheless continues to make its own way.
07

Starting from San Francisco
The long poems of Starting From San Francisco present a new, quieter, more profound aspect of the poet. His original lyricism and caustic humor have been confronted, as it were, with the real presence of evil and death. "Starting from Paumanok... I strike up for a New World" wrote Walt Whitman in 1860. Starting from San Francisco, a hundred years later, Ferlinghetti roved back across the country (this "cradle we rocked out of") then turned south of the border to visionary conclusions in that lost horizon symbolized by Machu Picchu, the Inca city the Spaniards never found. These poems of voyage are autobiographical in that they grew out of Ferlinghetti’s travels in South America and Europe, but there are also poems on other themes, including several long "broadsides," which the author identifies as "satirical tirades––poetry admittedly corrupted by the political, itself irradiated by the Thing it attacks." Commenting on this paperbook edition, to which two important poems, "Berlin" and "The Situation in The West" have been added, Ferlinghetti wrote: "These poems represent to me a kind of halfway house in the ascent of a mountain I hardly knew existed until I stopped and looked back at the flatlands below. Like a Zen fool lost in the woods who laughs and lies face down on the earth to find his way."
08

These are My Rivers: New Selected Poems 1955-1993
Lawrence Ferlinghetti, "one of our ageless radicals and true bards" (Booklist), has gathered here four decades of poetry in his inimitable everyman’s voice, including more than fifty pages of new work. The tone has deepened over the years, and he may now be seen as a true maestro in his field. Behind the irresistible air of immediacy and spontaneity lies much erudition and an antic imagination intent on subverting "the dominant paradigm." From his earliest books, including his landmark Coney Island of the Mind, Ferlinghetti has written poetry "in ways that those who see poetry as the province of the few and educated had never imagined. That strength has turned out to be lasting" (Joel Oppenheimer, N. Y. Times Books Review).
09


Who Are We Now? (1976), the first half of Wild Dreams, takes a long poetic look at the cultural fallout of a more radical time. This probing of the changes in the American psyche through the 1970s is carried forward in the second part, Landscapes of Living Dying (1979)—a work originally hailed by Library Journal as "Ferlinghetti's strongest work since his 1957 A Coney Island of the Mind. . . . [He] pursues his disheveled muse with the innocent passion of a young beatnik, hiding his authentic erudition behind a comfortable guise of spontaneous composition."
10

San Francisco Poems
Here are all of Ferlinghetti’s poems set in the city he has lived in for over half a century. He brings alive, with wit and lyricism, scenes of city life: a Giants baseball game, the Green Street Marching Mortuary Band, bohemian North Beach, Golden Gate Park, yachts on the Bay, and more. Also included are historic photographs, scattered prose pieces, and the text of his mischievous inaugural address with his vision of the city’s history as a poetic center and suggestions for keeping it that way.

Lawrence Ferlinghetti is a bookman, painter and author of poetry, fiction, essays and plays. His most recent books are How to Paint Sunlight (poetry) and Love in the Days of Rage (fiction).