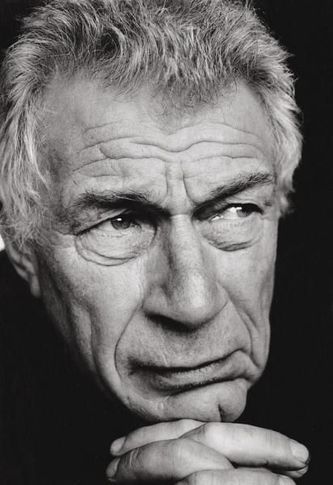 John Peter Berger was an English art critic, novelist, painter and author. His novel G. won the 1972 Booker Prize, and his essay on art criticism Ways of Seeing, written as an accompaniment to a BBC series, is often used as a college text.

Later he was self exiled to continental Europe, living between the french Alps in summer and the suburbs of Paris in winter. Since then, his production has increased considerably, including a variety of genres, from novel to social essay, or poetry. One of the most common themes that appears on his books is the dialectics established between modernity and memory and loss,

Another of his most remarkable works has been the trilogy titled Into Their Labours, that includes the books Pig Earth (1979), Once In Europa (1983) Lilac And Flag (1990). With those books, Berger makes a meditation about the way of the peasant, that changes one poverty for another in the city. This theme is also observed in his novel King, but there he focuses more in the rural diaspora and the bitter side of the urban way of life.

John Berger is the author of books: Ways of Seeing, About Looking, G., To the Wedding, And Our Faces, My Heart, Brief as Photos, Pig Earth, From A to X: A Story in Letters, Here Is Where We Meet, The Shape of a Pocket, Confabulations

Ways of Seeing
John Berger’s Classic Text on Art
John Berger's Ways of Seeing is one of the most stimulating and the most influential books on art in any language. First published in 1972, it was based on the BBC television series about which the (London) Sunday Times critic commented: "This is an eye-opener in more ways than one: by concentrating on how we look at paintings . . . he will almost certainly change the way you look at pictures." By now he has.


"Berger has the ability to cut right through the mystification of the professional art critics . . . He is a liberator of images: and once we have allowed the paintings to work on us directly, we are in a much better position to make a meaningful evaluation" —Peter Fuller, Arts Review


"The influence of the series and the book . . . was enormous . . . It opened up for general attention to areas of cultural study that are now commonplace" —Geoff Dyer in Ways of Telling


Winner of the 1972 Booker Prize for his novel, G., John Peter Berger (born November 5th, 1926) is an art critic, painter and author of many novels including A Painter of Our Time, From A to X and Bento’s Sketchbook.
02

About Looking
As a novelist, art critic, and cultural historian, John Berger is a writer of dazzling eloquence and arresting insight, whose work amounts to a subtle, powerful critique of the canons of our civilization. In About Looking he explores our role as observers to reveal new layers of meaning in what we see. How do the animals we look at in zoos remind us of a relationship between man and beast all but lost in the twentieth century? What is it about looking at war photographs that doubles their already potent violence? How do the nudes of Rodin betray the threats to his authority and potency posed by clay and flesh? And how does solitude inform the art of Giacometti? In asking these and other questions, Berger quietly -- but fundamentally -- alters the vision of anyone who reads his work.
03

G.
In this luminous novel — winner of Britain's prestigious Booker Prize — John Berger relates the story of "G.," a young man forging an energetic sexual career in Europe during the early years of the last century. With profound compassion, Berger explores the hearts and minds of both men and women, and what happens during sex, to reveal the conditions of the Don Juan's success: his essential loneliness, the quiet cumulation in each of his sexual experiences of all of those that precede it, the tenderness that infuses even the briefest of his encounters, and the way women experience their own extraordinariness through their moments with him. All of this Berger sets against the turbulent backdrop of Garibaldi and the failed revolution of Milanese workers in 1898, the Boer War, and the first flight across the Alps, making G. a brilliant novel about the search for intimacy in history's private moments.
04

To the Wedding
A blind Greek peddler tells the story of the wedding between a fellow peddler and his bride in a remarkable series of vivid and telling vignettes. As the book cinematically moves from one character's perspective to another, events and characters move toward the convergence of the wedding--and a haunting dance of love and death.
05

And Our Faces, My Heart, Brief as Photos
"Those who read or listen to our stories see everything as through a lens. This lens is the secret of narration, and it is ground anew in every story, ground between the temporal and the timeless . . . . In our brief mortal lives, we are grinders of these lenses."

This brooding, provocative, and almost unbearably lovely book displays one of the great writers of our time at his freest and most direct, addressing the themes that run beneath the surface of all his work, from Ways of Seeing to his Into Their Labours trilogy.
In an extraordinary distillation of his gifts as a novelist, poet, art critic, and social historian, John Berger reveals the ties between love and absence, the ways poetry endows language with the assurance of prayer, and the tensions between the forward movement of sexuality and the steady backward tug of time. He re-creates the mysterious forces at work in a Rembrandt painting, transcribes the sensorial experience of viewing lilacs at dusk, and explores the meaning of home to early man and to the hundreds of thousands of displaced people in our cities today.
A work of unclassifiable innovation and consummate beauty, And Our Faces, My Heart, Brief as Photos reminds us of Nabokov and Auden, Brecht and Lawrence, in its seamless fusion of the political and the personal.
06

Pig Earth
Set in a small village in the French Alps, Pig Earth relates the stories of sceptical, hard-working men and fiercely independent women. This book is an act of reckoning that conveys the precise wealth and weight of a world we are losing.
07

From A to X: A Story in Letters
In the dusty, ramshackle town of Suse lives A’ida. Her insurgent lover Xavier has been imprisoned. Resolute, sensuous and tender, A’ida’s letters to the man she loves tell of daily events in the town, and of its motley collection of inhabitants whose lives flow through hers. But the area is under threat, and as a faceless power inexorably encroaches from outside, so the smallest details and acts of humanity—an intimate dance, a shared meal—assume for A’ida a life-affirming significance, acts of resistance against the forces that might otherwise extinguish them.

From A to X is a powerful exploration of how humanity affirms itself in struggle: imagining a community which, besieged by economic and military imperialism, finds transcendent hope in the pain and fragility, vulnerability and sorrow of daily existence.
08

Here Is Where We Meet
Booker Prize-winning author John Berger, one of the most widely admired writers of our time, returns us to the captivating play and narrative allure of his previous novels-G. and Pig Earth among them-with a shimmering fiction drawn from chapters of his own life.

One hot afternoon in Lisbon, the narrator finds his long-dead mother seated on a park bench. "The dead don't stay where they are buried," she tells him. And so begins a remarkable odyssey, told in simple yet gorgeous prose, that carries us from the London Blitz in 1943, to a Polish market, to a Paleolithic cave, to the Ritz Hotel in Madrid. Here Is Where We Meet is a unique literary journey that moves freely through time and space but never loses its foothold in the sensuous present.
09

The Shape of a Pocket
The pocket in question is a small pocket of resistance. A pocket is formed when two or more people come together in agreement. The resistance is against the inhumanity of the New World Economic Order. The people coming together are the reader, me, and those the essays are about–Rembrandt, Paleolithic cave painters, a Romanian peasant, ancient Egyptians, an expert in the loneliness of a certain hotel bedroom, dogs at dusk, a man in a radio station. And unexpectedly, our exchanges strengthen each of us in our conviction that what is happening in the world today is wrong, and that what is often said about it is a lie. I’ve never written a book with a greater sense of urgency.
–John Berger
10

Confabulations
‘Language is a body, a living creature ... and this creature's home is the inarticulate as well as the articulate.’ John Berger's work has revolutionized the way we understand visual language. In this new book he writes about language itself, and how it relates to thought, art, song, storytelling and political discourse today. Also containing Berger's own drawings, notes, memories and reflections on everything from Albert Camus to global capitalism, Confabulations takes us to what is ‘true, essential and urgent’.