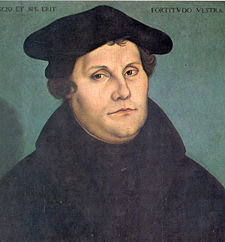 Martin Luther was a German monk, theologian, university professor and church reformer whose ideas inspired the Protestant Reformation and changed the course of Western civilization.

Luther's theology challenged the authority of the papacy by holding that the Bible is the only infallible source of religious authority and that all baptized Christians under Jesus are a spiritual priesthood. According to Luther, salvation was a free gift of God, received only by true repentance and faith in Jesus as the Messiah, a faith given by God and unmediated by the church.

Luther's confrontation with Charles V at the Diet of Worms over freedom of conscience in 1521 and his refusal to submit to the authority of the Emperor resulted in his being declared an outlaw of the state as he had been excommunicated from the Roman Catholic Church. Because of the perceived unity of the medieval Church with the secular rulers of western Europe, the widespread acceptance of Luther's doctrines and popular vindication of his thinking on individual liberties were both phenomenal and unprecedented.

His translation of the Bible into the vernacular, making it more accessible to ordinary people, had a tremendous political impact on the church and on German culture. It furthered the development of a standard version of the German language, added several principles to the art of translation, and influenced the translation of the English King James Bible. His hymns inspired the development of congregational singing within Christianity. His marriage to Katharina von Bora set a model for the practice of clerical marriage within Protestantism.

Much scholarly debate has concentrated on Luther's writings about the Jews. His statements that Jews' homes should be destroyed, their synagogues burned, money confiscated and liberty curtailed were revived and used in propaganda by the Nazis in 1933–45. As a result of this and his revolutionary theological views, his legacy remains controversial.

Martin Luther is the author of books: The Bondage of the Will, Martin Luther's Ninety-Five Theses, On Christian Liberty, Small Catechism, with Explanation, Commentary on Galatians, Martin Luther: Selections from His Writings, Three Treatises, The Book of Concord: The Confessions of the Evangelical Lutheran Church, A Simple Way to Pray, Basic Theological Writings

The Bondage of the Will
First published in 1525, Martin Luther's "Bondage of the Will" is acknowledged by theologians as one of the great masterpieces of the Reformation. It is Luther's response to Desiderius Erasmus's "Diatribe on Free Will, " written in his direct and unique style, combining deep spirituality with humor. Luther writes powerfully about man's depravity and God's sovereignty. The crucial issue for Luther concerned what ability free will has, and to what degree it is subject to God's sovereignty. For Luther, this key issue of free will is directly connected to God's plan of salvation. Is man able to save himself, or is his salvation entirely a work of divine grace? This work is vital to understanding the primary doctrines of the Reformation and will long remain among the great theological classics of Christian history.
02

On Christian Liberty
Perhaps no work of Martin Luther's so captures the revolutionary zeal and theological boldness of his vision as 'The Freedom of a Christian'. This translation of Luther's treatise brings alive the social, historical, and ecclesial context of Luther's treatise.
04

Small Catechism, with Explanation
Contains the basic principles of the Lutheran religion with some explanation.
05

Martin Luther: Selections from His Writings
The development of Martin Luther's thought was both a symptom and a moving force in the transformation of the Middle Ages into the modern world.

Geographical discovery, an emerging scientific tradition, and a climate of social change had splintered the unity of medieval Christian culture, and these changes provided the background for Luther's theological challenge. His new apprehension of Scripture and fresh understanding of man's relation to God demanded a break with the Church as then constituted and released the powerful impulses that carried the Reformation.

Luther's vigorous, colorful language still retains the excitement it had for thousands of his contemporaries. In this volume, Dr. Dillenberger has made a representative selection from Luther's extensive writings, and has also provided the reader with a lucid introduction to his thought.

A large number of Luther's works are presented in whole or excerpted, including:

• The Freedom of a Christian
• A Commentary on St. Paul's Epistle to the Galatians
• The Bondage of the Will
• The Pagan Servitude of the Church [aka Babylonian Captivity]
• Two Kinds of Righteousness
• several Biblical Prefaces
• several sermons
• Secular Authority: To What Extent It Should Be Obeyed
• An Appeal to the Ruling Class of German Nationality [aka Address to the German Nobility]
• The Ninety-five Theses
• Theses for the Heidelberg Disputation
07

Three Treatises
Martin Luther posted his Ninety-five Theses on the church door at Wittenberg in 1517. In the three years that followed, Luther clarified and defended his position in numerous writings. Chief among these are the three treatises written in 1520. In these writings Luther tried to frame his ideas in terms that would be comprehensible not only to the clergy but to people from a wide range of backgrounds. [i]To the Christian Nobility of the German Nation[/i] is an attack on the corruption of the church and the abuses of its authority, bringing to light many of the underlying reasons for the Reformation. The second treatise, [i]The Babylonian Captivity of the Church[/i], contains Luther's sharp criticism of the sacramental system of the Catholic church. [i[The Freedom of a Christian[/i] gives a concise presentation of Luther's position on the doctrine of justification by faith. The translations of these treatises are all taken from the American edition of Luther's Works. This new edition of [i]Three Treatises[/i] will continue to be a popular resource for individual study, church school classes, and college and seminary courses.
08

The Book of Concord: The Confessions of the Evangelical Lutheran Church
A new translation with expanded introductions and annotations.
09

A Simple Way to Pray
When asked by his barber and good friend, Peter Beskendorf, for some practical guidance on how to prepare oneself for prayer, Martin Luther responded by writing this brief treatise first published in 1535. A Simple Way to Pray is a fresh modern translation bringing us Luther's practical instruction, using Luther's I.T.C.P. method of prayer. This method anchors prayer in the catechism or other biblical texts, but allows the Holy Spirit to prompt thoughts via the Word, which may be chased more freely by the mind at prayer.
10