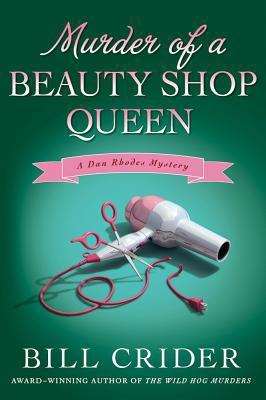 Too Late to Die (Sheriff Dan Rhodes #1)
Everyone knew her. A lot of them like her. One of them killed her.


Jeanne Clinton was a pretty and well-liked woman—though in her younger days she'd been known to be a bit wild. But she married an older man and settled down to a quiet, respectable life. Now she is dead, brutally murdered in her home.


Dan Rhodes, the thoughtful, hard-working sheriff of Blacklin County, Texas, has enough to worry about already: a rash of burglaries in town and an election coming up against a hot-shot opponent. Now he's got to find a killer among the residents of his little town—a wily killer, bound and determined not to be caught.


The deeper Rhodes digs into the hearts and minds of his neighbors, the more secrets he turned up...and the more violence he encounters. But Rhodes doesn't give up easily. And neither does the killer.
02

Shotgun Saturday Night (Sheriff Dan Rhodes #2)
When a cache of dismembered limbs is dumped in an overgrown field, and a local handyman is murdered, Sheriff Dan Rhodes's investigation leads him into a confrontation with a vicious motorcycle gang
03

Murder Among the OWLS (Sheriff Dan Rhodes #14)
It was the cat who "told" Sheriff Dan Rhodes that something was wrong. It ran into the house when he opened the door. His wife, Ivy, recognized the cat as belonging to their neighbor and told Dan to go check on the widow--Helen Harris never let the cat out of the house.
When Dan finds Helen's body on her kitchen floor, there is nothing to indicate that her death wasn't an accident. But Ivy's words ring in his head. Why was the cat out?
Helen had been active in a number of women's groups, one of which was the OWLS, the Older Women's Literary Society. She and some other women would also venture out with digging tools to look for ancient booty in the lands around the town. They didn't usually find much, but every now and then someone would dig up a coin or a piece of jewelry with potential. Could this have been the reason for Helen's death?
The investigation becomes more complicated as Rhodes learns that she actually had a number of suitors. Also, a news-hungry reporter who smells a juicy story gives Rhodes more trouble.
This is the fourteenth book in which Bill Crider has wowed readers with the extraordinary adventures of his Sheriff Dan Rhodes. Add a cast of vibrant characters, including wise-cracking deputies and the slightly wacky local citizens in Rhodes's bailiwick, and every book in this series is a wonderful treat.
04

Murder of a Beauty Shop Queen (Sheriff Dan Rhodes #19)
Dan Rhodes, sheriff of Blacklin County, Texas, is called to the Beauty Shack, where the young and pretty Lynn Ashton has been found dead, bashed over the head with a hairdryer. The owner said Lynn had gone to the salon late to meet an unknown client. There was a lot of gossip going on about Lynn before her death, but no one seems to really know much about her, or they're not telling Rhodes.

Lynn was known to flirt, and it's possible an angry wife or jilted lover had something to do with her death. The salon owner suspects two outsiders who have been staying in an abandoned building across the street. While he investigates the murder, Rhodes must also deal with the theft of copper and car batteries, not to mention a pregnant nanny goat that is terrorizing the town.

Murder of a Beauty Shop Queen is a wonderful entry in this always delightful series by award-winning author Bill Crider.
05

Before classes start one morning, the body of English instructor Earl Wellington is found outside the building of the community college. Wellington was clearly involved in a struggle with someone and has died as a result. Sheriff Dan Rhodes pursues and arrests Ike Terrell, a student who was fleeing the campus. Ike's father is Able Terrell, a survivalist who has withdrawn from society and lives in a gated compound. He’s not happy that his son has chosen to attend the college, and he's even less happy with the arrest.

Rhodes discovers that Wellington and Ike had had a confrontation over a paper that Wellington insisted Ike plagiarized. Wellington also had had a confrontation with the dean and was generally disliked by the students. As the number of suspects increases, it’s up to Rhodes to solve the murder while also dealing with an amusing but frustrating staff, a professor who wants to be a cop, and all the other normal occurrences that can wreak havoc in a small town.

Bill Crider's Compound Murder is an enjoyable police procedural filled with surprises, chuckles, and a quirky cast that will captivate mystery readers.
06

A Mammoth Murder (Sheriff Dan Rhodes #13)
One hot summer morning, big, tough Bud Turley brings an enormous tooth into the Blacklin County police station and asks Sheriff Dan Rhodes to keep it for him until the paleontologist from the community college comes up to examine it. Turley insists that the tooth is proof that Bigfoot roams the woods---unless it is from a prehistoric animal, which Rhodes thinks is more likely. But Turley's buddy Larry Colley has maintained for years that he's seen Bigfoot. Most inhabitants of Blacklin County have avoided those woods, but Colley and Bud are at home there, and Turley is ready to crow over his find. However, the next day his body is found in the forest, leaving Larry Colley more certain than ever that a monster is lurking there.

Dan Rhodes is not sure that Bud's death is the work of an "ordinary" criminal. And he wouldn't be too surprised if somehow feral hogs were involved; Rhodes knows what many Texans don't---it is estimated that at least a million and a half feral hogs roam the state; many believe it could be twice that many. But when the sheriff is faced with the murder of an elderly woman in the small store she ran at the edge of the woods, he knows he has a human killer on his hands.
A Mammoth Murder is Bill Crider's thirteenth mystery featuring Sheriff Dan Rhodes, his two-man headquarters "staff," and the quirky citizens of Blacklin County. Readers of the series will unanimously welcome another visit to this hospitable, if surprising, Texas community where mixed with the real-life inhabitants you'd find in any small Southwest town, there will always be some really unique goings-on.

Texas Vigilante
The powerful sequel to Outrage at Blanco, Edgar & Shamus Award nominee Bill Crider's startlingly original western crime novel
Six months ago, Ellie was a newlywed, working the dry land in 1880s Texas. Then the desperados came. They raped her and killed her husband, leaving her for dead. But she hunted them down and, along the way, found an inner strength and relentless determination that no man can match. Ellie thought the killing was over...that she'd put her guns away for good to run a ranch that she'd inherited from a legendary Texas Ranger. She was wrong.
TEXAS VIGILANTE
A prison wagon is on its way to Huntsville when one of the prisoners, ruthless killer Angel Ware, engineers a bold escape. Now free, and blaming his sister Sue for his arrest, Angel and a gang of three other escaped murderers track her and her family down to Ellie's ranch. Angel and his gang mount a bloody attack and take Sue's young child with them. There's a posse on its way, but Ellie Taine isn't going to wait. She saddles her horse and loads her guns, prepared to enforce the only justice she can rely on...her own.
"As clean and sharp as a fine Bowie knife. Crider's prose slices through conventions and expectations," -Booklist
08

Of All Sad Words (Sheriff Dan Rhodes #15)
Strangers are moving into Blacklin County, and none of them is any stranger than Seepy Benton, a math teacher whom the county judge suspects is a wild-eyed radical. Benton and Max Schwartz, who has opened a music store, are among the students in the Citizens’ Sheriff’s Academy, which seemed like a good idea when Sheriff Dan Rhodes presented it to the county commissioners. However, when a mobile home explodes and a dead body is found, the students become the chief suspects, and the commissioners aren’t happy. To make matters worse, there’s another murder, and one of Rhodes’s old antagonists returns with his partner in crime to cause even more trouble.

As always in Blacklin County, there are plenty of minor annoyances to go along with the major ones. For one thing, there’s a problem with the county’s Web page. The commissioners blame Rhodes, who knows nothing about the Internet but is supposed to be overseeing their online presence. Then there’s the illegal alcohol being sold in a local restaurant. It was produced in a still that Rhodes discovered after the explosion of the mobile home, and he’s sure it has some connection to the murders.

It’s another fun ride with genre veteran Bill Crider, and, once again, it’s up to Sheriff Dan Rhodes to save the day before Blacklin County becomes the crime capital of Texas.
09

Outrage at Blanco
Crider's prose slices through conventions and expectations," -Booklist
OUTRAGE AT BLANCO
It's True Grit meets Gran Torino in a blazingly original crime novel from Bill Crider, an Edgar and Shamus finalist and a two-time winner of the Anthony Award
On a bloody day in 1887, death came to Blanco, Texas.
Before the sun went down, the livery stable was torched, an outlaw gang robbed the bank, two men were killed, and young newlywed Ellie Taine was raped. One of the dead was the man who planned the robbery - the son of dying, legendary Texas Ranger Jonathan Crossland - the other was Ellie's husband, an innocent bystander.
The dead don't know fear.
Ellie is dead inside. She takes a gun and rides out after the desperadoes, cold-blooded and fearless, determined to kill the men who ruined her life. She's joined by Jonathan Crossland, who only has days left to live... but would rather die in his saddle making amends for his son than rot in his bed. Together, Ellie and Jonathan set out on a mission of vengeance and justice, one that neither of them expects nor hopes to survive.
"In the hands of Bill Crider, noir seems as atmospheric and doomful as ever," Publisher's Weekly
"Bill Crider is one of the most unpretentious and versatile pure entertainers in the mystery field." Ellery Queen's Mystery Magazine
10

The Wild Hog Murders (Sheriff Dan Rhodes #18)
Like most of the rest of Texas, Blacklin County is being overrun with feral hogs that destroy farmland and crops. There's hardly any defense against these pests, but they haven't been the cause of murder. Until now. A mother and son have opened an animal shelter in the county and they welcome even feral hogs. Someone's threatened them by slaughtering one of their animals and leaving it on their doorstep. Then Sheriff Dan Rhodes and Deputy Ruth Grady stumble across a dead man while searching the woods for a convenience store robber.

The investigation into the man's death is complicated by angry hog hunters, a crusading talk-show host, a bounty hunter named Hoss, conflicts with the county commissioners, and the reappearance of Rapper and Nellie, the inept two-man motorcycle gang that's caused Rhodes considerable trouble in the past. By the time he's sorted through all the clues, Rhodes discovers that quite a few people aren't who they seemed to be, including those he's known for a long time. And some of them are killers.

Award-winning author Bill Crider has written an endearing and consistently entertaining series, and The Wild Hog Murders offers a fresh new chance to get in on the fun.