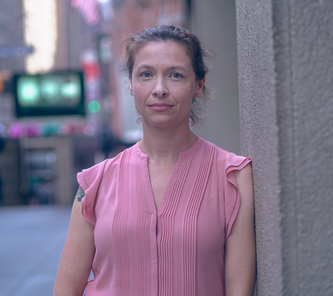 Louisa Luna is the author of the novels Brave New Girl, Crooked, and Serious As A Heart Attack. She was born and raised in the city of San Francisco and lives in Brooklyn with her husband and daughter.

Two Girls Down (Alice Vega, #1)
When two young sisters disappear from a strip mall parking lot in a small Pennsylvania town, their devastated mother hires an enigmatic bounty hunter, Alice Vega, to help find the girls. Immediately shut out by a local police department already stretched thin by budget cuts and the growing OxyContin and meth epidemic, Vega enlists the help of a disgraced former cop, Max Caplan. Cap is a man trying to put the scandal of his past behind him and move on, but Vega needs his help to find the girls, and she will not be denied.

With little to go on, Vega and Cap will go to extraordinary lengths to untangle a dangerous web of lies, false leads, and complex relationships to find the girls before time runs out, and they are gone forever.
02

On the outskirts of San Diego, the bodies of two young women are discovered. They have no names, no IDs, and no family looking for them. Fearing the possibility of a human trafficking ring, the police and FBI reach out to Alice Vega, a private investigator known for finding the missing, for help in finding out who the Janes were—and finding the others who are missing.

Alice Vega is a powerful woman whose determination is matched only by her intellect, and, along with her partner Cap, she will stop at nothing to find the Janes before it is too late.
Louisa Luna is writing new classics of crime fiction, and her partnership of Vega and Cap is rightfully joining the pantheon of the most memorable in crime fiction.
03

Brave New Girl
A fourteen-year-old trying to find her way in the world, Doreen is as much an outcast at school as she is at home. Marginalized by her peers, misunderstood by her parents, and mourning the loss of her older brother who disappeared when she was just a child, Doreen finds solace in her fierce love of music and in her best friend, Ted.
But when her older sister begins dating a bewildering twenty-one-year-old named Matthew, Doreen must confront feelings she never knew she possessed. Forced into adulthood kicking and screaming (not to mention swearing), Doreen ultimately impels her troubled family to forge a new understanding of the world -- and, maybe more surprisingly, of one another.
High school is bad enough; it's worse when you have only one friend in the world and a family that just doesn't get it. This breathless coming-of-age novel explores the alienation of adolescence and introduces a bold and shimmering new voice in fiction.
04

Crooked
Melody is just out of prison. Faced with the absence of her brother, who's serving life in San Quentin, and hardened by her own experiences in lock-up, Mel sturggles to adjust to the harsh realities of life on the outside. She quickly discovers that freeedom is relative...she has no money, no prospects, no guidance.
Forced to return to her mother's apartment in Marin County and take a job houling portable toilets, Mel finds herself drinking too much and hanging out with her old gang again. Haunted by glimpses of her own harrowing girlhood and of the mysterious circumstances that put her in prison in the first place, she slowly, bravely begins to forge a potential path toward redemption and escape.
05

Serious as a Heart Attack
Queenie Sells is having what she thinks is a good day. After getting fired from her job at a calendar company for botching daylight saving time, she lands a job offer from a wealthy acquaintance who's trying to track down his girlfriend, a stripper named Trigger Happy. Sounds easy enough -- until Queenie finds Trigger dead in her own apartment.
Now that she's become both suspect for the murder and the target for an unknown predator, Queenie's on the run. Hopping from bar to bar, from Coney Island clam stands to the Waldorf-Astoria, she inadvertently lands on the trail of Trigger's killer, putting herself in the line of fire. Along the way she meets Rey, a private eye with a soft spot for tough-talking ladies; Detective Olds, the stuttering cop who thinks Queenie's the culprit; and a dozen New York denizens -- some strange, some sad, some sweet, and some deadly, every one dropping in and out of Queenie's life as she searches for each fragile piece of the puzzle that may eventually lead her to the truth -- before the next body that turns up is her own.
06