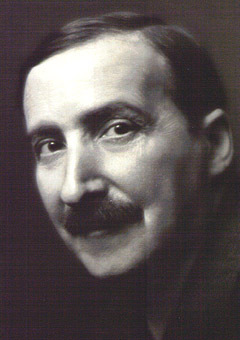 Stefan Zweig was one of the world's most famous writers during the 1920s and 1930s, especially in the U.S., South America, and Europe. He produced novels, plays, biographies, and journalist pieces. Among his most famous works are Beware of Pity, Letter from an Unknown Woman, and Mary, Queen of Scotland and the Isles. He and his second wife committed suicide in 1942.

Zweig studied in Austria, France, and Germany before settling in Salzburg in 1913. In 1934, driven into exile by the Nazis, he emigrated to England and then, in 1940, to Brazil by way of New York. Finding only growing loneliness and disillusionment in their new surroundings, he and his second wife committed suicide.

Zweig's interest in psychology and the teachings of Sigmund Freud led to his most characteristic work, the subtle portrayal of character. Zweig's essays include studies of Honoré de Balzac, Charles Dickens, and Fyodor Dostoyevsky (Drei Meister, 1920; Three Masters) and of Friedrich Hölderlin, Heinrich von Kleist, and Friedrich Nietzsche (Der Kampf mit dem Dämon, 1925; Master Builders). He achieved popularity with Sternstunden der Menschheit (1928; The Tide of Fortune), five historical portraits in miniature. He wrote full-scale, intuitive rather than objective, biographies of the French statesman Joseph Fouché (1929), Mary Stuart (1935), and others. His stories include those in Verwirrung der Gefühle (1925; Conflicts). He also wrote a psychological novel, Ungeduld des Herzens (1938; Beware of Pity), and translated works of Charles Baudelaire, Paul Verlaine, and Emile Verhaeren.

Most recently, his works provided the inspiration for 2014 film The Grand Budapest Hotel.

Amok Koşucusu
On a sweltering ocean-liner travelling from India to Europe a passenger tells his story--the tale of a doctor in the Dutch East Indies torn between his duty and the pull of his emotions; a tale of power and maddening desire, of pride, shame and a headlong flight into folly.
'Amok' is one of the most intense and incisive of the tales that brought Stefan Zweig to worldwide fame.
[jacket description]
05

Beware of Pity
The great Austrian writer Stefan Zweig was a master anatomist of the deceitful heart, and Beware of Pity, the only novel he published during his lifetime, uncovers the seed of selfishness within even the finest of feelings.

Hofmiller, an Austro-Hungarian cavalry officer stationed at the edge of the empire, is invited to a party at the home of a rich local landowner, a world away from the dreary routine of his barracks. The surroundings are glamorous, wine flows freely, and the exhilarated young Hofmiller asks his host's lovely daughter for a dance, only to discover that sickness has left her painfully crippled. It is a minor blunder, yet one that will go on to destroy his life, as pity and guilt gradually implicate him in a well-meaning but tragically wrongheaded plot to restore the unhappy invalid to health.

"Stefan Zweig was a dark and unorthodox artist; it's good to have him back." —Salman Rushdie
07

Amok and Other Stories
09

The logic of capitalism, boom and bust, is unremitting and unforgiving. But what happens to human feeling in a completely commodified world? In The Post-Office Girl, Stefan Zweig, a deep analyst of the human passions, lays bare the private life of capitalism.

Christine toils in a provincial post office in post–World War I Austria, a country gripped by unemployment. Out of the blue, a telegram arrives from Christine’s rich American aunt inviting her to a resort in the Swiss Alps. Christine is immediately swept up into a world of inconceivable wealth and unleashed desire. She feels herself utterly transformed: nothing is impossible. But then, abruptly, her aunt cuts her loose. Christine returns to the post office, where yes, nothing will ever be the same again.

Christine meets Ferdinand, a bitter war veteran and disappointed architect, who works construction jobs when he can get them. They are drawn to each other, even as they are crushed by a sense of deprivation, of anger and shame. Work, politics, love, sex: everything is impossible for them. Life is meaningless, unless, through one desperate and decisive act, they can secretly remake their world from within.

Cinderella meets Bonnie and Clyde in Zweig’s haunting and hard-as-nails novel, completed during the 1930s, as he was driven by the Nazis into exile, but left unpublished at the time of his death. The Post-Office Girl, available here for the first time in English, transforms our image of a modern master’s achievement.