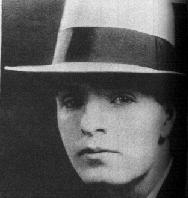 Cornell Woolrich is widely regarded as the twentieth century’s finest writer of pure suspense fiction. The author of numerous classic novels and short stories (many of which were turned into classic films) such as Rear Window, The Bride Wore Black, The Night Has a Thousand Eyes, Waltz Into Darkness, and I Married a Dead Man, Woolrich began his career in the 1920s writing mainstream novels that won him comparisons to F. Scott Fitzgerald. The bulk of his best-known work, however, was written in the field of crime fiction, often appearing serialized in pulp magazines or as paperback novels. Because he was prolific, he found it necessary to publish under multiple pseudonyms, including "William Irish" and "George Hopley" [...] Woolrich lived a life as dark and emotionally tortured as any of his unfortunate characters and died, alone, in a seedy Manhattan hotel room following the amputation of a gangrenous leg. Upon his death, he left a bequest of one million dollars to Columbia University, to fund a scholarship for young writers.

Cornell Woolrich is the author of books: The Bride Wore Black, Rear Window, Rendezvous in Black, I Married a Dead Man, Night Has a Thousand Eyes, Phantom Lady, Fright, The Black Curtain, Waltz into Darkness, The Black Angel

The Bride Wore Black
AMERICA'S MASTER OF SUSPENSE...FIRST IN THE DEFINITIVE SERIES OF THIS AMERICAN GENIUS

No one knew who she was, where she came from, or why she had entered their lives. All they really knew about her was that she possessed a terrifying beauty-and that each time she appeared, a man died horribly...
02

Rear Window
The story that inspired the Alfred Hitchcock film masterpiece! Cornell Woolrich. His name represents steamy, suspenseful fiction, chilling encounters on the dark and sultry landscape of urban America in the 1930s and 1940s. Here, in this special collection, are his classic thrilers, including 'Rear Window', the story of Hal Jeffries who, trapped in his apartment because of a broken leg, takes to watching his neighbours through his rear window, and becomes certain that one of those neighbours is a murderer. Also included are such haunting, heart-stopping tales as those involving a man who finds his wife buried alive; a girl trapped with a deranged murderer who likes to knife his victims while dancing; and a woman seizing her chance to escape a sadistic husband, only to find her dream go terrifyingly wrong.
03

Rendezvous in Black
On a mild midwestern night in the early 1940s, Johnny Marr leans against a drugstore wall. He’s waiting for Dorothy, his fiancée, and tonight is the last night they’ll be meeting here, for it’s May 31st, and June 1st marks their wedding day. But she’s late, and Johnny soon learns of a horrible accident—an accident involving a group of drunken men, a low-flying charter plane, and an empty liquor bottle. In one short moment Johnny loses all that matters to him and his life is shattered. He vows to take from these men exactly what they took from him. After years of planning, Johnny begins his quest for revenge, and on May 31st of each year—always on May 31st—wives, lovers, and daughters are suddenly no longer safe.
04

I Married a Dead Man
Pregnant, abandoned by her slimy husband and destitute, Helen Georgesson boards a train going west. In the crowded train car she meets happy newlyweds Patrice Hazzard, also expecting, and Hugh. They are on their way to visit Hugh’s parents, whom Patrice is meeting for the first time. After Patrice hands Helen her wedding band so she can wash her hands in the rest room, the train crashes, killing the Hazzards, but Helen survives. When she regains consciousness in the hospital, she discovers she has been mistaken for Patrice. Patrice’s wealthy in-laws send for Helen, and she decides for the sake of her son to go along with the misunderstanding. They welcome her into the fold and her “brother-in-law” Bill even shows signs of romantic interest. But when her husband tracks her down and threatens her with blackmail, her dream turns into a nightmare.
05

Night Has a Thousand Eyes
One of Cornell Woolrich's most famous novels, this classic noir tale of a con man struggling with his ability to see the future is arguably the author's best in its depiction of a doomed vision of predestination.
06

Phantom Lady
Phantom lady, I was with you for six hours last night, but I can't remember what you look like, or what you wore -- except for that large orange hat. We sat shoulder to shoulder at a little bar in the east Fifties. We ate dinner together, saw a Broadway show together, shared a cab together.

The bartender, the waiter, the usher, the cab driver -- none of them remembers you. The police say I was home strangling my wife at the moment I met you.

You are the only one who can prove my story -- but I don't know your name, or where you live. And I can't search for you from a jail cell....
07

Fright
A long lost noir masterpiece from the father of Noir fiction. After strangling his blackmailing mistress on the day of his wedding, Prescott Marshall goes on the run with his new wifebut are the police on his trail?
08

The Black Curtain
After a slight accident on a tawdry street, Frank Townsend goes home - only to discover he hasn't been there in years. Suffering from amnesia, accused of murder, and the object of a deadly pursuit, he must overcome the crime that time has thrust upon him...
09

Waltz into Darkness
In this thrilling tale of greed and deception, Cornell Woolrich tells of middle-aged Louis Durand, whose fiancee has died fifteen years ago on the eve of their wedding. Now Louis decides to take one more chance at love by marrying Julia Russell, a woman he knows only by correspondence. When she arrives on the day of their wedding, she is younger and more beautiful than he expected--and far more deadly. Louis soon comes to realize that Julia is not who she claims to be--and they both embark on a waltz into darkness.
10

A panic-stricken young wife races against time to prove that her convicted husband did not murder his mistress. Writing in first person from her viewpoint, Woolrich makes us feel her love and anguish and desperation, as she becomes an avenging angel to rescue her husband from execution.