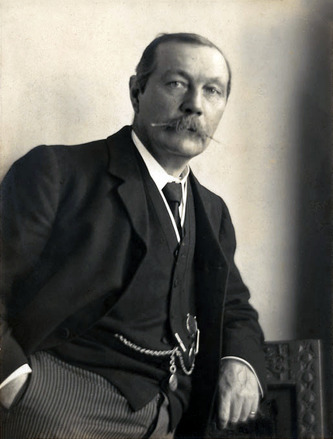 Sir Arthur Conan Doyle was born the third of ten siblings on 22 May 1859 in Edinburgh, Scotland. His father, Charles Altamont Doyle, a talented illustrator, was born in England of Irish descent, and his mother, born Mary Foley, was Irish. They were married in 1855.

Although he is now referred to as "Conan Doyle", the origin of this compound surname (if that is how he meant it to be understood) is uncertain. His baptism record in the registry of St Mary's Cathedral in Edinburgh gives 'Arthur Ignatius Conan' as his Christian name, and simply 'Doyle' as his surname. It also names Michael Conan as his godfather.

At the age of nine Conan Doyle was sent to the Roman Catholic Jesuit preparatory school, Hodder Place, Stonyhurst. He then went on to Stonyhurst College, leaving in 1875.

From 1876 to 1881 he studied medicine at the University of Edinburgh. This required that he provide periodic medical assistance in the towns of Aston (now a district of Birmingham) and Sheffield. While studying, Conan Doyle began writing short stories. His first published story appeared in "Chambers's Edinburgh Journal" before he was 20. Following his graduation, he was employed as a ship's doctor on the SS Mayumba during a voyage to the West African coast. He completed his doctorate on the subject of tabes dorsalis in 1885.

In 1885 Conan Doyle married Louisa (or Louise) Hawkins, known as "Touie". She suffered from tuberculosis and died on 4 July 1906. The following year he married Jean Elizabeth Leckie, whom he had first met and fallen in love with in 1897. Due to his sense of loyalty he had maintained a purely platonic relationship with Jean while his first wife was alive. Jean died in London on 27 June 1940.

Conan Doyle was found clutching his chest in the hall of Windlesham, his house in Crowborough, East Sussex, on 7 July 1930. He had died of a heart attack at age 71. His last words were directed toward his wife: "You are wonderful." The epitaph on his gravestone in the churchyard at Minstead in the New Forest, Hampshire, reads:

Conan Doyle's house, Undershaw, located in Hindhead, south of London, where he had lived for a decade, had been a hotel and restaurant between 1924 and 2004. It now stands empty while conservationists and Conan Doyle fans fight to preserve it.

The Hound of the Baskervilles (Sherlock Holmes, #5)
We owe The Hound of the Baskervilles (1902) to Arthur Conan Doyle's good friend Fletcher "Bobbles" Robinson, who took him to visit some scary English moors and prehistoric ruins, and told him marvelous local legends about escaped prisoners and a 17th-century aristocrat who fell afoul of the family dog. Doyle transmogrified the legend: generations ago, a hound of hell tore out the throat of devilish Hugo Baskerville on the moonlit moor. Poor, accursed Baskerville Hall now has another mysterious death: that of Sir Charles Baskerville. Could the culprit somehow be mixed up with secretive servant Barrymore, history-obsessed Dr. Frankland, butterfly-chasing Stapleton, or Selden, the Notting Hill murderer at large? Someone's been signaling with candles from the mansion's windows. Nor can supernatural forces be ruled out. Can Dr. Watson--left alone by Sherlock Holmes to sleuth in fear for much of the novel--save the next Baskerville, Sir Henry, from the hound's fangs?

Many Holmes fans prefer Doyle's complete short stories, but their clockwork logic doesn't match the author's boast about this novel: it's "a real Creeper!" What distinguishes this particular Hound is its fulfillment of Doyle's great debt to Edgar Allan Poe--it's full of ancient woe, low moans, a Grimpen Mire that sucks ponies to Dostoyevskian deaths, and locals digging up Neolithic skulls without next-of-kins' consent. "The longer one stays here the more does the spirit of the moor sink into one's soul," Watson realizes. "Rank reeds and lush, slimy water-plants sent an odour of decay ... while a false step plunged us more than once thigh-deep into the dark, quivering mire, which shook for yards in soft undulations around our feet ... it was as if some malignant hand was tugging us down into those obscene depths." Read on--but, reader, watch your step! --Tim Appelo

The Sign of Four (Sherlock Holmes, #2)
As a dense yellow fog swirls through the streets of London, a deep melancholy has descended on Sherlock Holmes, who sits in a cocaine-induced haze at 221B Baker Street. His mood is only lifted by a visit from a beautiful but distressed young woman - Mary Morstan, whose father vanished ten years before. Four years later she began to receive an exquisite gift every year: a large, lustrous pearl. Now she has had an intriguing invitation to meet her unknown benefactor and urges Holmes and Watson to accompany her. And in the ensuing investigation - which involves a wronged woman, a stolen hoard of Indian treasure, a wooden-legged ruffian, a helpful dog and a love affair - even the jaded Holmes is moved to exclaim, 'Isn't it gorgeous!'

The Lost World (Professor Challenger, #1)
It's London, 1907. Journalist Edward Malone, rejected by the woman he loves because he is too prosaic, decides to go in search of adventure and fame to prove himself worthy of her. Soon after, he meets Professor George Challenger, a scientist who claims to have discovered a 'lost world' populated by pterodactyls and other prehistoric monsters.
08

The Return of Sherlock Holmes (Sherlock Holmes, #6)
'Holmes,' I cried. 'Is it really you? Can it indeed be that you are alive? Is it possible that you succeeded in climbing out of that awful abyss?'

Missing, presumed dead, for three years, Sherlock Holmes returns triumphantly to his dear companion Dr Watson. And not before time! London has never been in more need of his extraordinary services: a murderous individual with an air gun stalks the city.

Among thirteen further brilliant tales of mystery, detection and deduction, Sherlock Holmes investigates the problem of the Norwood Builder, deciphers the message of the Dancing Men, and cracks the case of the Six Napoleons.
10

His Last Bow (Sherlock Holmes, #8)
'His Last Bow', the title story of this collection, tells how Sherlock Holmes is brought out of retirement to help the Government fight the German threat at the approach of the First World War. The Prime Minister himself requests Holmes's services to hunt down the remarkable German agent, Von Bork. Several of the detective's earlier cases complete the volume, including 'Wisteria Lodge', 'The Bruce-Partington Plans', and 'The Disappearance of Lady Frances Carfax'. In 'The Dying Detective', Dr Watson is horrified to discover Holmes at death's door from a mysterious tropical disease as his friend lays a trap for a murderer.