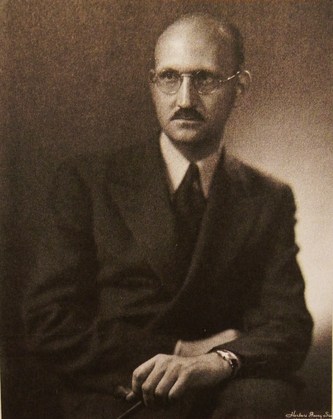 Philip Van Doren Stern was an American author, editor, and Civil War historian whose story "The Greatest Gift," published in 1943, inspired the classic Christmas film It's a Wonderful Life (1946).

Philip Van Doren Stern was born in Wyalusing, Pennsylvania into a family of humble means. His Pennsylvania-born father was a traveling merchant of Bavarian descent, who came to Wyalusing from West Virginia with his New Jersey-born wife. Stern grew up in Brooklyn, New York and New Jersey, and graduated from Rutgers University.

After graduating from Rutgers in 1924, Philip Van Doren Stern worked in advertising before switching to a career as a designer and editor in publishing.

He was a historian and author of some 40 books and editor most known for his books on the Civil War[1] that a New York Times obituary called "authoritative" and "widely respected by scholars". As an editor, he worked at Pocket Books, Simon & Schuster, and Alfred A. Knopf.[1] He compiled and annotated short story collections and the writings and letters of Abraham Lincoln, Edgar Allan Poe, and Henry David Thoreau.

During World War II, he was a member of the planning board of the United States Office of War Information. He was the general manager of Editions for the Armed Services, which resized popular books so Americans serving in the military could store them in the pockets of their uniforms.[1] He compiled and edited many collections and anthologies of short stories, pictorial books, annotations, and books on historical subjects.

Stern edited, compiled, and introduced The Viking Portable Poe in 1945, a compact collection of letters, short stories, poems, and essays by Edgar Allan Poe. Stern wrote the biographical introduction to the collection, selected the contents included, and wrote introductory essays on the varying genres. The collection became a standard single-volume anthology of Poe's works for almost fifty years.

Philip Van Doren Stern is the author of books: The Greatest Gift: A Christmas Tale, Secret Missions of the Civil War, A Pocket Book of Modern American Short Stories, The Man Who Killed Lincoln, Strange Beasts and Unnatural Monsters, The Confederate Navy: A Pictorial History, The Moonlight Traveler: Great Tales of Fantasy and Imagination, Soldier Life in the Union and Confederate Armies, Robert E. Lee, the Man and the Soldier: A Pictorial Biography, Great Ghost Stories

The Greatest Gift: A Christmas Tale
A beautiful gift edition of the heartwarming story that became the Christmas classic, It’s a Wonderful Life.

For almost seventy years, people the world over have fallen in love with Frank Capra’s classic Christmas movie It’s a Wonderful Life. But few of those fans know that Capra’s film was based on a short story by author Philip Van Doren Stern, which came to Stern in a dream one night.

Unable at first to find a publisher for his evocative tale about a man named George Pratt who ponders suicide until he receives an opportunity to see what the world would be like without him, Stern ultimately published the story in a small pamphlet and sent it out as his 1943 Christmas card. One of those 200 cards found its way into the hands of Frank Capra, who shared it with Jimmy Stewart, and the film that resulted became the holiday tradition we cherish today.

Now fans of It’s a Wonderful Life, or anyone who loves the spirit of Christmas, can own the story that started it all in an elegant, illustrated edition that’s perfect for holiday giving. It includes an Afterword by Stern’s daughter, Marguerite Stern Robinson, that tells the story of how her father’s Christmas card became the movie beloved by generations of people around the world.
02

Secret Missions of the Civil War
By Philip Van Doren Stern. Prominent Civil War historian has woven a compelling history of the Civil War from first hand accounts by men and women who undertook secret missions and were involved in underground activities for both sides. Discussions of codes and ciphers used during this war. 320 pages. 6 X 9.
03

The Man Who Killed Lincoln
05

From the moment you open this book you will have stumbled into a strange, hideous region of monsters and misshapen creatures that will leave you spellbound--prey to their crawling terrors. Not all of these demons have been spawned by powers outside you. Some of them may already be within you...clawing and shrieking in the terrible silence of that dark portion of your own unknown, unknowable self.

"This thing, this invader, this horror was supporting his arms, legs, and head!"

"There was some creature there...which could see in the dark...Had it caught the scent of me?"

"The Black Mantle...groped greedily and endlessly through the mud, eating and never sleeping, never resting."

"Here was this extinct animal mooning about my island...and I had hatched him!"

"With each dive, with each attack, they became bolder. And they had no thought of themselves."

"I have heard the squealing of pigs at slaughtering time...This was not that sort of noise. It was worse, much worse."

The nature of the evidence, by M. Sinclair.
Slime, by J.P. Brennan.
The garden of Paris, by E. Williams.
Doomsday deferred, by W.F. Jenkins.
The cocoon, by J.B.L. Goodwin.
Æpyornis Island, by H.G. Wells.
The terror of Blue John Gap, by A.C. Doyle.
The birds, by D. du Maurier.
The judge's house, by B. Stoker.
The kill, by P. Fleming.
Mrs. Amworth, by E.F. Benson.
Skeleton, by R. Bradbury.
The elephant man, by Sir F. Treves.
06

The Confederate Navy: A Pictorial History
This profusely illustrated volume describes one of the most amazing fleets in history—the hastily improvised Navy of the South. At the beginning of the Civil War, the Confederate navy was a modest collection of nearly anything that would float—mostly small, unmilitary vessels and a few captured Union ships; there was not one real warship in the fleet. The North had men-of-war and a large fleet of merchant ships that could be armed quickly. As a result, the North was soon able to blockade the southern coast and capture port after port. But the South fought back ingeniously, sending agents to England and France to have the finest warships built, innovating such modern weapons as the torpedo, the submarine, and the armored warship—all of which changed the nature of naval warfare. The Confederate Navy deals with the early ironclads; with the Trent case, which nearly brought England into the war; with the fighting on the Mississippi and James rivers; and with the flamboyant blockade-runners who could make 80,000 in profits on a single voyage. It tells about the great ships—the Alabama, the Florida , and the Shenandoah; and the great seamen—Semmes, Maffit, and Bulloch, among others. Crammed with facts, anecdotes, and exciting incidents, The Confederate Navy clarifies the complicated—and often heroic—naval operations of the Civil War.
07

The Moonlight Traveler: Great Tales of Fantasy and Imagination
Anthology of fantasy & supernatural short stories including: The Celestial Omnibus by E. M. Forster; Desire by James Stephens; Enoch Soames by Max Beerbohm; The Man Who could Work Miracles by H. G. Wells; the Bottle Imp by Robert Louis Stevenson; Adam and Eve and Pinch Me by A. E. Coppard; Lord Mountdrago by W. Somerset Maugham; All Hallows by walter de la Mare; Our distant Cousins by Lord Dunsany; Cobbler, Cobbler, Mend My Shoe by Jan Struther; the Man Who Missed the Bus by Stella Benson; sam Small's Better Half by Eric Knight; Mr. Arcularis by conrad Aiken; the Diamond as Big as the Ritz by F. Scott Fitzgerald; william Wilson by Edgar Allan Poe; The Curfew Tolls by Stephen Vincent Benet; The Most Maddening Story in the World by Ralph Straus; Phantas by Oliver Onions; Roads of Destiny by O. Henry; Wireless by Rudyard Kipling; and The Music on the Hill by Saki (H. H. Munro).
08

Soldier Life in the Union and Confederate Armies
A facsimile of the 1868 edition featuring firsthand accounts of Civil War soldiers when they were not in battle, revealing historic details about what a soldier wore, ate, did when he was not fighting. Brings another dimension to the history of the Civil War.
09

Robert E. Lee, the Man and the Soldier: A Pictorial Biography
A warm and moving portrait of a great figure, by an eminent Civil War historian. This insightful biography captures the brilliant leader in many roles, from West Point cadet to family man. Includes photographs and line drawings.
10

Contains:
The Beckoning Fair One, by Oliver Onions
The Mezzotint, by M. R. James
Tarnhelm, by Sir Hugh Walpole
The Willows, by Algernon Blackwood
August Heat, by W. F. Harvey
The Mark of the Beast, by Rudyard Kipling
Crouching at the Door, by D. K. Broster
The Familiar, by Sheridan Le Fanu
The Upper Berth, by F. Marion Crawford
The Tell-Tale Heart, by Edgar Allan Poe
The Yellow Wall Paper, by Charlotte Perkins Gilman
Afterward, by Edith Wharton
Full Fathom Five, by Alexander Woolcott