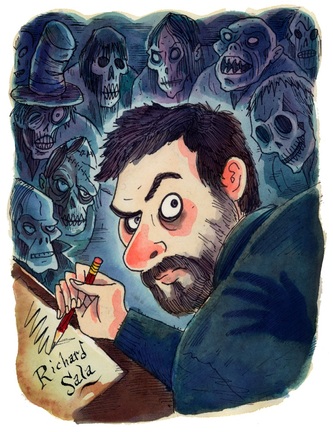 Richard Sala grew up with a fascination for musty old museums, dusty old libraries, cluttered antique shops, narrow alleyways, hidden truths, double meanings, sinister secrets and spooky old houses. He has written and drawn a number of unusual graphic novels which often combine elements of classic mystery and horror stories and which have been known to cause readers to emit chuckles as well as gasps. Although most of his books are written with teens and older readers in mind, his book, CAT BURGLAR BLACK, can be enjoyed by younger readers as well.

Note: I am new to GoodReads ~ and I am happy to have a place dedicated to sharing my love of books with other book lovers. Please be patient with me if I seem rather slow and clumsy! Thanks to all my readers over the years!

Delphine
A mysterious traveler gets off the train in a small village surrounded by a thick, sinister forest. He is searching for Delphine, who vanished with only a scrawled-out address on a scrap of paper as a trace. In his newest chiller, Richard Sala takes the tale of Snow White and stands it on its head, retelling it from Prince Charming's perspective (the unnamed traveler) in a contemporary setting. This twisted tale includes all the elements of terror from the original fairy tale, with none of the insipid saccharine coating of the Disney animated adaptation. Yes, there will be blood.

Originally serialized as part of the acclaimed international series, Delphine is executed in a rich and ominous duotone that shows off Sala's virtuosity just as much as last year's full-color post-apocalyptic horror fantasy The Hidden did; punctuated with stunning full-color chapter breaks.
02

When K. Westree arrivse at Bellsong Academy, she thinks she's left her cat-burgling past behind her. But K. soon discovers the school has a mystery of its own, a hidden treasure left behind by its founder, and she's the only one who has a hope of finding it. As she resumes her cat-burgling in an attempt to discover the school's secrets, K. begins to question if a normal life is really what she wants.
03

Take a walk with the dazed survivors of a mysterious worldwide catastrophe. They are bound for a place, somewhere in the desert, where a terrible truth awaits them.
04

Chuckling Whatsit
A genre-defining masterpiece of graphic noir comes back into print.

Sala's drawing style, while most often compared to Edward Gorey, also reveals the influence of everything from Hollywood monster movies and Dick Tracy to German expressionism and Grimm's fairy tales. It's a style that's perfectly suited to the narrative, constantly flirting with Sala's fascination for the grotesque and lending palpable tension to the gruesome riddle of The Chuckling Whatsit.

Peculia
Peculia collects strips contained in Sala's ongoing comic book series Evil Eye, also published by Fantagraphics. Peculia, our intrepid, super-ish heroine, is a precocious and rebellious masked adventurer who fearlessly wanders her way through a world filled with zombies, monsters and more. Often compared to Edward Gorey and Charles Addams, Sala has developed a distinctive narrative and visual style that can best be described as gothic humor. The Peculia collection is an excellent introduction to Richard Sala's idiosyncratic universe of noir-ish mystery, suspense, and occasional whimsy.
06

The Grave Robber's Daughter
It was the morning of Paisley Curtin's sixteenth birthday when she realized her town was doomed. Just one week before, a traveling carnival had rolled into the quiet hillside community of Obidiah's Glenn and right away things began to get weird. The carnival itself was strange enough, with its seedy sideshows and sinister exhibitions, its Room of False Mirrors, its dangerous Gallows Hand game and the monstrous caged creature called the Tom-Geek.
Then parents in the town began to get sick, followed by the teachers, doctors and the sheriff's department. The children of Obidiah's Glenn become suddenly wild, roaming about at night with crazed looks in their eyes. Paisley realizes she had to do something to stop what she saw happening--but there wasn't anyone left in town who seemed to be able to help. So she sends a letter to someone she hoped might listen, someone who would know what to do--a friend of her late sister's from college, a self-styled "girl detective" with a questionable reputation named Judy Drood.


Her only hope is that Judy will arrive in time to save her town--and to prevent her from ending up as yet another exhibit in the dark carnival's Hall of Embalmed Abominations!


The Grave Robber's Daughter is another fast-paced, delirious ride from the author of the critically acclaimed The Chuckling Whatsit ("A masterpiece!" --Rue Morgue Magazine) and marks the return of Judy Drood, Girl Detective, last seen thwarting the murderous plans of a group of demented college professors in Sala's 2005 epic mystery-thriller Mad Night. The Grave Robber's Daughter is filled with Sala's unique blend of horror and whimsy that will please his many fans and new readers alike.
07

For those who always thought the animated introductions to PBS's Mystery! series were cooler than the actual shows themselves, Richard Sala's marvelously dark and stormy novel-length thrillers are just the ticket.

In Mad Night, his follow-up to The Chuckling Whatsit, Sala follows ace detective Judy Drood and her reluctant companion Kasper Keene as they try to unravel a string of mysterious occurrences and heinous murders in the usually tranquil Lone Mountain College. What is the sinister secret of Professor Massimo Ibex? How is the (literal) puppet mistress Aunt Azalea and her bevy of beauteous pirate girls involved? Where does the lithping, er, lisping, corrupt cop Pinch fit in? And what exactly is the significance of the Glass Scorpion?

Peculia and the Groon Grove Vampires
This tongue-in-cheek horror novel, which manages to both parody and celebrate elements of modern horror is the latest book by Richard Sala, author of such delightfully macabre books as Peculia, The Chuckling Whatsit, Maniac Killer Strikes Again! and the Evil Eye comic book series. Sala has gained a devoted following over the years as a master of a unique brand of quirky horror and dark humor. His work appeared in the critically-acclaimed McSweeney's Vol. 13 collection and has been animated on MTV, and he has collaborated with Lemony Snicket, among others. This book features several characters from his "Peculia" tales—stories which revolve around a mysterious waif-like girl, her very strange acquaintances, and her tendency, through no fault of her own, to find herself facing a variety of awful creatures and ghastly goings-on.


For years, Sala has promised his readers a full-length "Peculia" novel that would shed some light on the background of the intrepid young wanderer, and they won't be disappointed. No previous exposure to any of Sala's stories is necessary, however. In fact, anyone who likes a little chuckle with their chills, anyone who enjoys curling up with tales of vampires and other things that go bump in the night, will want to get their claws on this before the next full moon.
09

Violenzia and Other Deadly Amusements
“Let there be no mercy or forgiveness for they have shown none.” With these words, whispered into the wind, a mysterious young woman leaps into action with wild abandon, twin automatics blazing. Is she a brave and reckless heroine taking on a monstrous evil? Or is she a deranged angel of death? One thing is clear: whether she is dropping from a high window into a crowd of red-robed fanatical cultists, or facing down a horde of psychotic hillbillies, you don’t want to get in her way. Fast moving, Violenzia is a blast of pulpy fun, told in scenes of audacious action and splashes of rich watercolors. With elements of golden age comics and old movies mixed with Sala’s trademark humor and sense of the absurd, Violenzia is a bloody enigma masked as eye candy, a puzzle box riddled with bullet holes from comics’ master of the macabre.
10

In A Glass Grotesquely
The latest book from the author of The Hidden and Delphine contains the epic tale of a modern master-criminal — a graphic novella, comprising 115 of the book's 136 pages. Following in the bloody footsteps of super-fiends such as Fantomas, Fu Manchu, or Professor Moriarty, Super-Enigmatix is ruthless, cunning, and thoroughly evil. His only goal is to spread fear and cause chaos — but does he want to destroy civilization, or save it? Not even his loyal army of female commandos can guess his real motives, or his true identity. The fast-moving "picture story" is told with sly humor and all the mayhem is depicted in Sala's trademark colorful watercolor washes and sharp, detailed line-work. Also included in this collection are three shorter stories, appearing in print for the first time, from Richard Sala's archive of strange and offbeat tales!